The Evangelical Covenant Church (ECC) was established in Chicago on February 20, 1885, by Swedish immigrants. These immigrants had begun arriving in America since the mid-1860s, near the end of the Civil War. Known as Mission Friends, they were nurtured by the religious and folk renewal movements in Sweden. 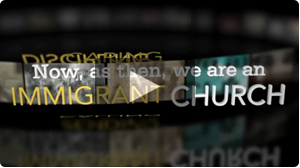 During the nineteenth century, Mission Friends formed congregations within regional conferences throughout New England, New York, the Great Lakes states, the Midwest, and on the west coast.

Who were these mission friends or covenanters? Why were they led to form new congregations and eventually a denomination?

The movement began in Sweden. It grew first among the evangelical followers of Carl Olof Rosenius (1816-1868) within the Evangelical National Foundation (part of the Church of Sweden), and later among the followers of Paul Peter Waldenström (1838-1917), who gathered in intimate religious meetings or “conventicles.”

These meetings grew into local, regional, and provincial mission societies. Both ordained pastors and licensed lay preachers or “colporteurs” led these societies. The piety and convictions of these leaders were warmly expressed by the spiritual songs they wrote and sang, their passion for mission at home and abroad, and their deep commitment to personal, relational experiences.

The Church of Sweden (and the Swedish American Augustana Synod) increasingly perceived the societies as radicals. By the mid-1870s, two convictions defined them outside historic Lutheranism: (1) the believers’ church (not the all-encompassing folk church) is closest to the New Testament and (2) the Bible is the only authority (doctrinal formulations such as the Augsburg Confession are valued, but rejected as normative creeds).

As a consequence, the Covenant Church (Svenska Missionsförbundet) was first formed in Sweden in 1878. The American denomination followed in 1885, having experimented with their own Lutheran Mission and Ansgar synods during the 1870s and early 80s. The Swedish Mission Friends and American Covenanters created a vibrant transatlantic movement. It was enriched by immigration, the particular histories of Sweden and the United States, and the vitality of its leaders and people, who tended to be young.

The ECC gathers believers with mutual experience of new life in Christ and although without a formal confession, the ECC rests its identity on the following affirmations:

The text that a young pastor, F. M. Johnson, chose for his sermon at the 1885 organizational meeting in Chicago simply expresses the central commitment of the Covenant Church: “I am a companion of all who fear thee and of those who keep thy precepts.”