ECC STAFF BEING CARED FOR AMID PROTESTS IN CHILE 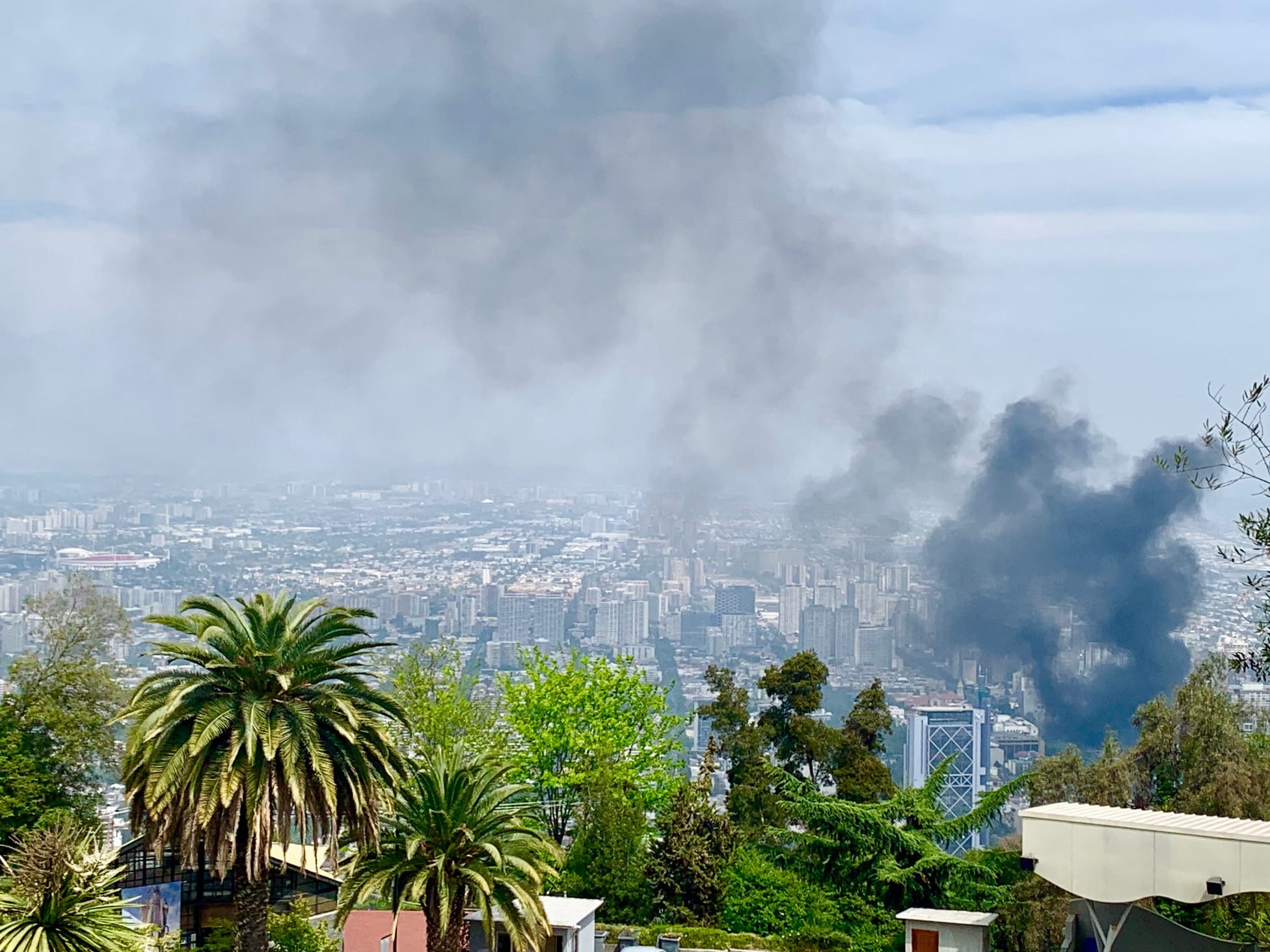 Smoke from buses being burned during protests in Santiago, Chile, can be seen from the top of Cerro San Cristobal, the most famous hill in the city. (Photos by Erin Chan Ding/For the Evangelical Covenant Church)

SANTIAGO, Chile (Oct. 20, 2019)—A proposed hike in metro fares triggered massive demonstrations in this Chilean capital city, and the discontent has spread to other major cities in the country, including the coastal city of Concepción, where a triennial meeting of Covenant churches across Latin America was scheduled to start Monday.

The metro rate hikes catalyzed a deeper sense of dissatisfaction around economic inequity in Chile, which has had a reputation for stability in recent decades but also deals with one of the largest wealth gaps in Latin America. 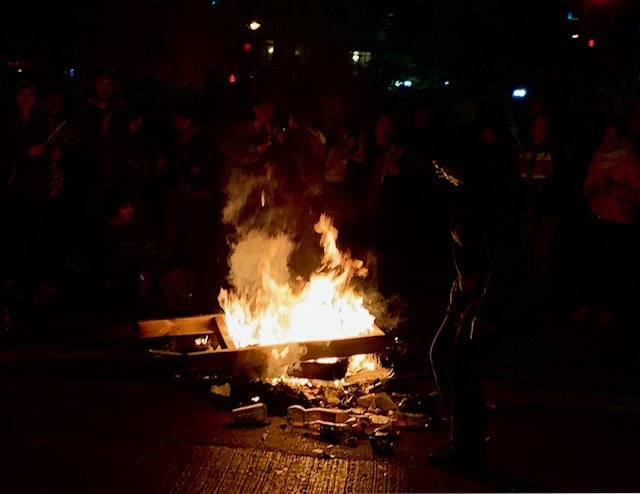 A fire set by protesters blocks an intersection late Saturday in the Santiago neighborhood of Providencia.

In some places, the demonstrations, which began last week in Santiago and escalated over the weekend to other Chilean cities, felt peaceful and communal; in other areas, protestors burned buses and buildings. In one supermarket conflagration over the weekend in greater Santiago, three people died. During the weekend, the government declared a state of emergency in several cities and enacted mandatory curfews in Santiago and Concepción, as well as in the city of Valparaíso, and deployed thousands of soldiers in an effort to stabilize some neighborhoods. Late Saturday, the president of Chile announced the suspension of the rate hike, but demonstrations around the country continued. 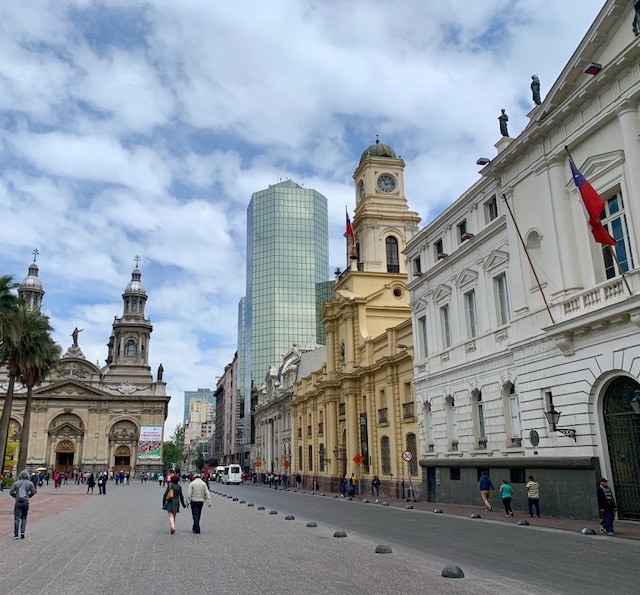 Several sections of Santiago, such as Plaza de Armas, its historical heart, experienced periods of calm during the protests.

The protests have coincided with the triennial gathering of Confraternidad de Iglesias del Pacto Evangélico, or CIPE, the network of Covenant churches across Latin America, which is scheduled to take place for five days about 50 miles outside of Concepción.

Deborah Masten, the Evangelical Covenant Church’s director of global personnel, has been leading the safety response to the volatile situation with regard to ECC staff and has been in close communication with CIPE leaders.

“We’re addressing issues of care for people in the country,” Masten says. “We are in prayer for Chile and working with various team members who have been gathering for CIPE.” 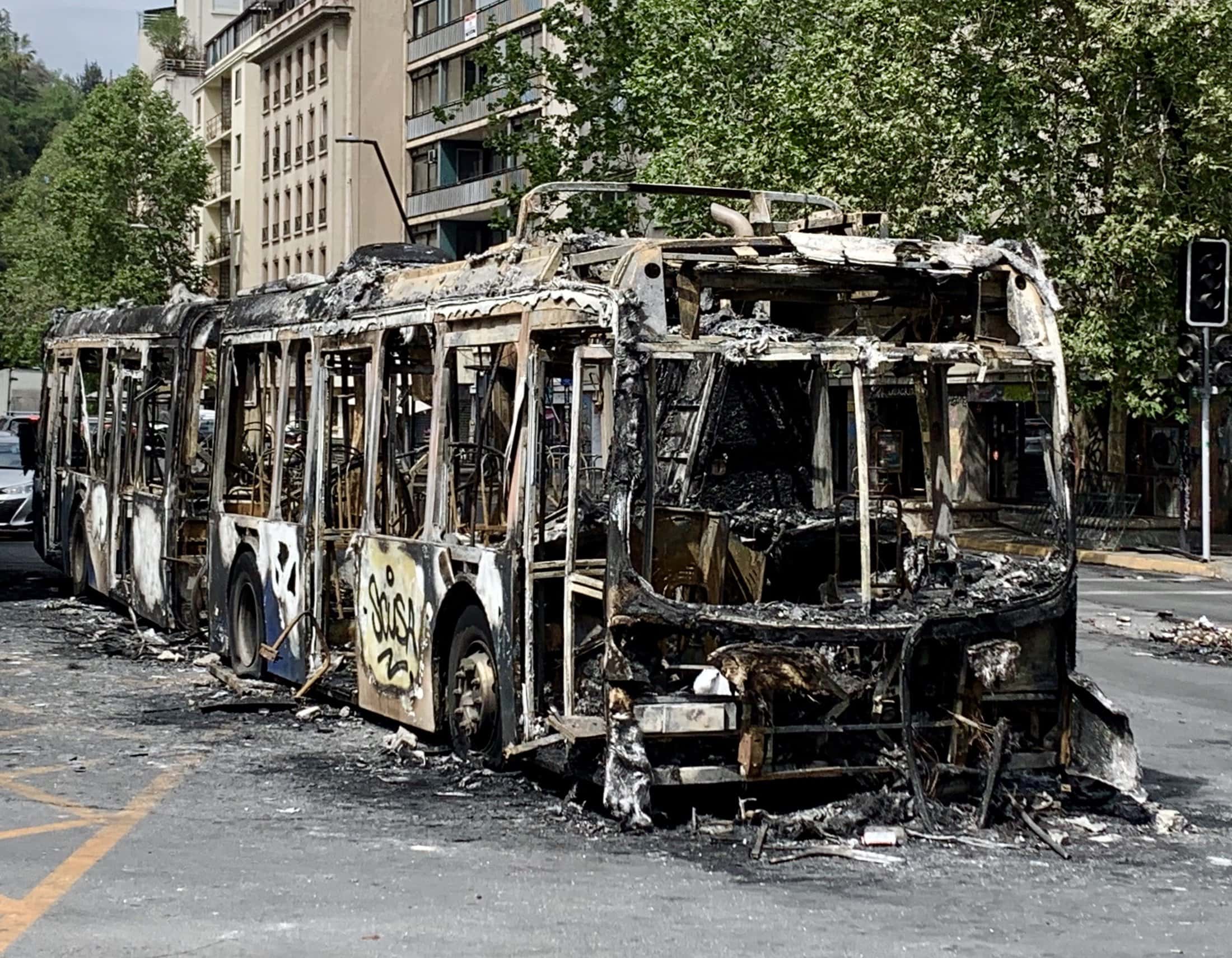 The remnants of a bus burned during the weekend of protests sit in the streets of Santiago a couple of blocks from the Museo Nacional de Bellas Artes, or Chile’s National Museum of Fine Arts.