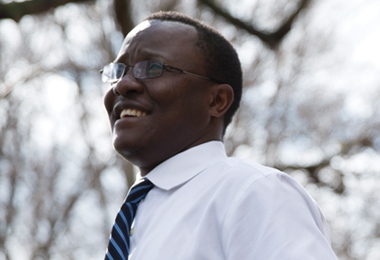 Separated from his family by war, Flory Buki embarked on a journey of survival and persistent hope

By Liripa Floribert (Flory) Buki as told to Linda Sladkey | Photography by Edgar Torres | May 25, 2016

My father was a security guard at a gold mine in a small town in the northeast of the Democratic Republic of the Congo. My mother ran a small business, selling tomatoes, onions, and bananas in a local market near our home in Bunia. In Congo people often go to work but don’t get paid. And so it was with my father—I don’t ever remember him being paid. But we did have a house that was provided by the company.

Although my parents were very dedicated to our education, they couldn’t afford school for all thirteen of us children. Even though I am the seventh child, I was the first one to get an education. My mother was able to pay for most of my first two years of school, but then the money ran out.

I still tried to attend school. Every day I would wake up at 4 a.m. and walk seven miles to the school, but the teachers would kick me out of class because my parents could not pay the “minerval,” the monthly fee of $2. Instead of going home, I would stop and play soccer with friends until it was time to go home. My siblings and I were very discouraged and felt we had no hope.

But one day I was fortunate enough to meet a Belgian missionary named Baba (Father) Lou.

Baba Lou saw me playing soccer, and he called me to his house and gave me rice and fish. After I finished eating, he asked me why I wasn’t in school. I told him my parents could not afford to pay for school, so I played soccer because then I could go home at night and feel good that I had actually gone somewhere and done something for the entire day.

Baba Lou said, “I will pay for this month so that you can finally go to school.” I thought, “This is good news!” So I went back to school. Baba Lou had connections with people in Belgium, and he collected funds to sponsor me and many other children in villages around mine. He helped finance my education until the first year of high school when I began to take on odd jobs to pay for it myself. My favorite job was at a talk radio station as an on-air host.

Throughout my childhood there was often a funeral in my neighborhood. Kids were dying—often from something as treatable as malaria. I myself had malaria twenty-one times. When I felt the symptoms coming on, my mother would give me some money to buy quinine at the pharmacy. The cost of twenty pills was about fifty cents. Some families could not afford that, so a lot of children died.

When I finished secondary school in 2002, my father told me he was proud of me and now it was time for me to find a job. I told him I wanted to go to the university, but he said, “We cannot afford that.” Annual tuition at a university in the Congo at that time was around $154. Most people cannot afford that. Despite what my father said, I was thanking God for seeing me through primary and secondary education and I was preparing to go to the university. I was excited and hopeful.

Then war broke out in Bunia. A civil war between the Hema and Lendu tribes had been ongoing in my country since 1996, and now it had come to my home. All of a sudden my dream of a university education came to an end.

In April 2003 the fighting became especially dangerous. We left our home to go to a UN Internally Displaced Camp two miles away. My father stayed behind to protect our belongings.

The UN compound was essentially a refugee camp—tents, no bathrooms, no food except for the UN cookies, a shortbread-like biscuit that provided quick carbs and energy. The compound was the only safe place in the area because it was protected by approximately 600 Uruguayan forces who were part of the UN peacekeeping mission.

Because I felt it was important for us to stick together as a family, I returned home to get my father and bring him back to the compound so we could all endure together. It was a dangerous thing for a teenager to go back to the city alone, but my hope was that since I was a young man, I could easily pass for the militia.

I made it back to our home and found my father, but as we were traveling back, we were caught in the middle of shooting and we became separated from each other. I ran back toward my house and my father ran toward the UN compound. I found myself in a crowd of people. I knew the names of some of them, but mostly we were all strangers, running for our lives. We could only go one direction—away from the militia. We walked for twenty-nine days—about 200 miles.

I saw people fighting, people fleeing with young children, people drinking from rivers that were yellow from pollution. The UN flew helicopters over the area and dropped more cookies to help us survive.

It would be three years before I would see my family again.

I ended up in the city of Bukavu, which was safe for the moment. One of my younger brothers, who was only ten years old at the time, was also separated from the family. He managed to return home before I did. It was at least a year before I heard that while some of my cousins and uncles had not survived the civil war, my immediate family were all fine and had returned home. In 2004, cell phones had just started to expand in Congo and one of my high-school friends called a mutual friend in my compound to say he had seen my father earlier that day. I asked him to bring the telephone to my family so I could talk to them. That is when they first learned that I was still alive.

In Bukavu I met Dave and Jennie Annis, a couple from Great Britain. Jennie was a pastor who was responsible for six small congregations in Wales, and she and Dave came to Bukavu every two years on a mission trip. They asked me, “What do you do?” I told them my story, including my dream to go back to school.

Before they returned home, Dave and Jennie told me they had a plan for me. They were going to bake cakes and sell them in the market back in Wales so I could go to school.

I wondered if they were really going to do that. Jennie said, “Yes, I know people will buy cakes in the UK. I’m going to sell them and you are going to go to school.” She was not joking. I did not understand and asked her, “How can you be from a western country and just go sell cakes in the market? You should be working and earning good money.” She told me it was not like that. The reality is different.

So Dave and Jennie went back home, and they sent me $10 here, $20 there, $5 here, $5 there until I graduated from Université Officielle de Bukavu (Official University of Bukavu), where I earned a degree in international public law.

During that time I also met a beautiful and adventurous woman who was a new missionary with Food for the Hungry International (FHI). Sarah Beckstrom wanted to change the world. We fell in love and became engaged while interning at FHI together.

After Sarah and I were engaged, we decided it was time for me to be reunited with my family and for her to meet them too. We flew to Bunia and stayed in my parents’ home for two weeks before returning to Bukavu to continue our work at FHI.

We got married in 2006 at Sarah’s home church, Country Covenant Church in Campton Hills, Illinois. We traveled back to Congo three months after our wedding—our plan was always to go back and work there. When we returned, Sarah and I were employed as consultants for German Agro Action, a nonprofit focused on food security.

Then Sarah became pregnant. When we went to see the local doctor, he told us Sarah was Rh negative and that she needed a RhoGam injection right away to prevent her immune system from attacking any Rh positive cells in the baby.

We immediately went on a search for the shot. We first went to Bunia but there was no shot. We went to Kinshasa, the capital, where a friend helped us find a doctor. The doctor told us not to waste any more time, but to return to America so that Sarah could get the shot. We were cutting it close, but we did make it back to the States in time.

My degree from Congo did not mean anything in the States, so I started over to earn a bachelor of science degree and then a master’s in business administration. I had found work as a warehouse security guard when we first arrived. Sarah and I were living with Sarah’s mother, who later helped me find work in a hospital in Joliet, Illinois, where I worked for two years before I began my undergraduate work.

Education is still of primary importance to me. It is why Sarah and I sponsor several Congolese children, as I was once sponsored myself. Knowing that kids join militia groups instead of going to school because their parents can’t afford to pay for school is a strong incentive for me to financially support young people from my region. Education is the hope of Congo.

I talk to anyone who will listen to me about the needs in Congo. That is why I joined the speakers’ bureau for Covenant Kids Congo in 2012 so that I can tell churches about sponsoring the education of children who desperately want to go to school. I am also a member of the Board of Directors for the Paul Carlson Partnership which supports medical and economic development in northwestern Congo. My country is in need and I want to do what I can to relieve the suffering.

Now Sarah is pregnant with our third child. I’m still adapting to the differences in life and culture in the U.S., but I have a good job at Swedish Covenant Hospital in Chicago as the manager of sourcing and contracting, and Sarah is working with Serve Globally in the ECC.

My hope is to one day live in Congo again. One day I will return home.