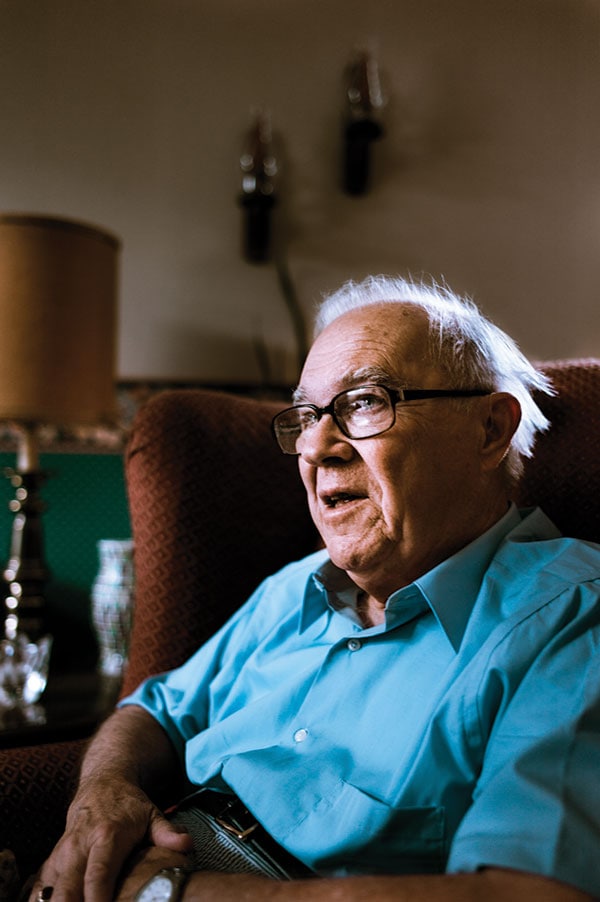 You taught theology at North Park Theological Seminary for nearly thirty years. What did you want students to come away with from your classes?
I don’t think I ever asked myself that question. I’m not very goal oriented—perhaps that makes me strange. I thought my vocation was to teach the faith as confessed by the church. I enjoyed teaching students the texts of the church, especially the texts that were foundational to the formation of Christian faith. I liked teaching a cohesive presentation of the faith.

Do you have to be comfortable with ambiguity to do theology?
Well, that’s why I used the word cohesive. Cohesive is how you can hold some things in tension. Martin Luther said, “A Christian is a perfectly free lord of all, subject to none. A Christian is a perfectly dutiful servant of all, subject to all.” As a definition of a Christian, you’re going to hold freedom and servanthood together.

Were you ever bothered by the term “systematic theology”?
I was raised with those words. Now if I had my druthers—this won’t go over well, but I would have preferred “dogmatic theology.” See, the word “dog- matic” immediately raises red flags, but you can teach dogma without being dogmatic. A softer word might be “Trinitarian” theology. But “systematic” means you’re teaching a system. It’s hard to have a Covenant system.

Why have you been such a strong advocate of spiritual direction, which some have resisted in the past for being too Catholic or too mystical?
I think there are several factors. One is Pietism itself. You know that’s our history so the whole practice of developing or structuring the interior life has integrity with our tradition. Within the tradition of Pietism there are practices that are clearly articulated, so we are not importing something foreign. That doesn’t mean we can’t use gifts from other traditions, because we do.

With our history in classical Lutheran Pietism, we already have structures in place for spiritual development—including spiritual direction. Luther himself, as well as August Francke and Philipp Spener, speaks about conversing with another brother. Now today we would include the sister. When there are reasons for seeking clarity or even understanding and receiving the forgiveness of sins and assurance of pardon, the brother or sister can speak the words of Scripture to one another. So they particularly single out conversation.

All of them have forms—I guess I’ll use that word as long as we understand it isn’t a formalism. They do have forms for reading the Bible. So we already have a tradition that anchors what today would be called spiritual formation and spiritual direction.

Two, when North Park first started developing an interest in this, Fran Anderson (professor emerita of Christian education) also had done work in this area. She had ways of teaching this area that were appropriate for the ongoing development of this field. We also were motivated by the fact that pastors were in need of some form that was well more than training. It’s formation in the interior life so when they left the seminary and began their pastoral work or whatever vocation of ministry they were called to do, they were already equipped to develop their interior life so that the pressures and the routines of the ministry would not usurp the growth of the soul. We were trying to teach the variety of forms of prayer, of Bible reading. We had a course on anger—after all, the Bible has anger psalms. And we taught about hospitality. Scripture says a great deal about that.

In your book Alive in Christ, Alert to Life you encourage readers to do an exercise in which they reflect on major events in their lives. If you did that exercise today, what would you reflect on?
There is a long silence. He starts to answer the question, then stops, pauses, and tries to answer it another way until a full minute and thirty seconds have passed.

You know Lois and I have been married fifty-six years, and one thing is the gift character of somebody who you know is always there. That’s one thing you don’t have to worry about; I mean that’s not an anxiety factor. So I think that’s a major component in life.

Along with that, we’ve commented at home a great deal about the gift that our children and their spouses and our grandchildren are for us. They stop in and they’re not afraid to tease us. They all feel right at home here, and they know where everything is, but the gift character of our family is a major thing, and when you can say that about your in-laws, that is a real gift. We can talk to them about any subject. So that’s one of the profound things.

The other big thing is that I’ve done a lot of work with death since I moved back here. I do a lot of pastoral work at church, and I’ve been present with a lot of dying people, and I’m getting closer to that myself. I don’t think there is anything now more profound than death.

I think Christian people have to be careful that they not minimize the depth of loss that is death. You can spiritualize death to the point of dishonesty. And that does not do justice to the gospel. It minimizes the gospel.

He pauses a full forty seconds searching for words.

There’s a place in the poetry of T.S. Elliot that goes, “No place of grace for those who avoid the face.” Death removes the face. Among the Jewish philosophers no one has written more about the face than Joseph Levinass, who says that the first instance of transcendence for any of us is to see a face. Death removes the face. So this business about the face—in the Old Testament notice how many times God’s face is referred to, especially in the psalter—nothing was more terrifying than God’s face because when God turned his face, it was like death.

Death removes the face, and in a family, that face is no longer across from you at the table, or in the family room or wherever it is. So the closer you get to death, the more you think about the loss of the face. It’s easy in Christian circles to say, “Oh, they’re so much better off now.” Well, I say be careful. Be careful because the New Testament says we sorrow, but not as those who have no hope. We can’t say we should not sorrow. That is to deny your humanity. Death is a real thing. It’s a phenomenon that nobody has ever grasped because it is the ultimate loss. Only those who are left know what death is. Those who have died don’t know. They’re not the ones who don’t see the face across the table.

Each time I encounter death, I face my own death or that of someone close to me. You’ve got to let yourself know what it is; otherwise you minimize the gospel, because the gospel says it will be reversed. It doesn’t say it will be prevented. And it does not say you will be spared.

Why do you think we cling to life so fiercely when we have the promise of so much in the future?
I think that for those of us who enjoy our lives and our grandkids, I don’t know why we’d want to say goodbye to it because life too is God’s gift. You see, I’ve baptized all my grandchildren so I have a sacramental connection to them. I think that you know the need to cling to life has levels because there are some people who wouldn’t care, but some things are hard to say goodbye to. Not because you are a materialist but because they are genuine and significant, and they are significant—not in an idolatrous way but in a gift way, and so there is gratitude.