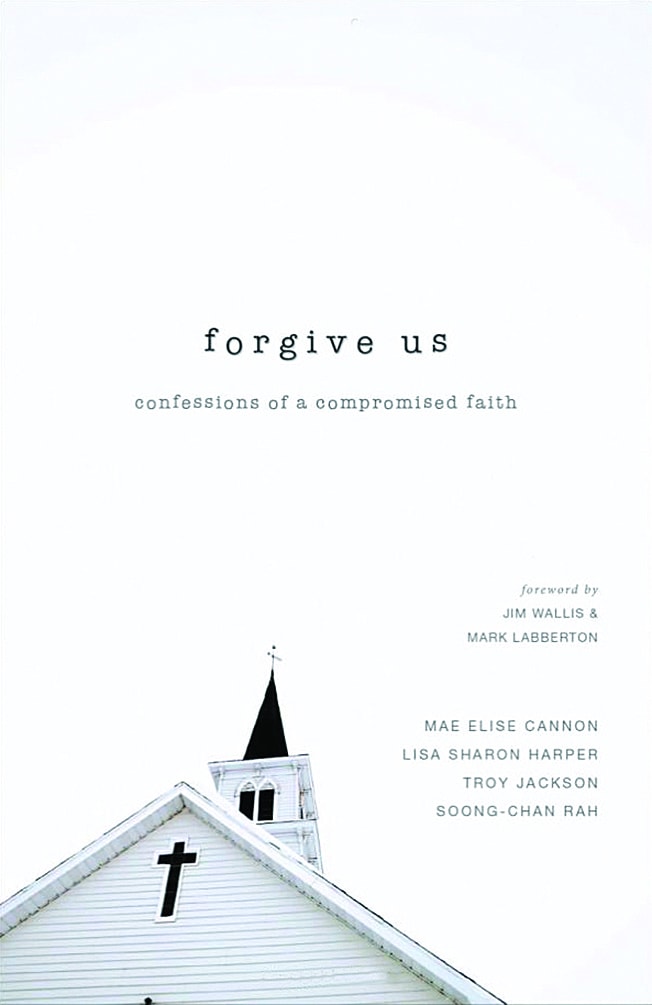 I served a church where we regularly confessed our sins in unison readings or responsively, followed by words of assurance from one of the pastors. After several months a friend came up to me concerned that always having to confess our sins made worship kind of depressing. Confession is not fun, he suggested. Confession does not feel good. Confession forces us to face the bleaker parts of our lives where sin has made its mark.

Forgive Us: Confessions of a Compromised Faith will evoke plenty of strong reactions. The book is written by a team of authors: pastor and historian Troy Jackson, and Covenanters Mae Elise Cannon, Lisa Sharon Harper, and Soong-Chan Rah. Included in each of the seven chapters is a description of a specific topic where the church has sinned, a sign of hope in the church where we are getting it right, and a written lament specific to the sin(s) the chapter addresses. The authors’ concern is that the evangelical church too often sees itself as the problem solver in the world, ignores its own tainted history, and does not think it really needs help.

I was startled to read that when Europeans arrived in this country, a population of 5 million Native Americans were speaking 375 languages—but their number was reduced to 600,000! The authors paint a painful picture of the Trail of Tears, the Indian Removal Act of 1830 under Andrew Jackson, and the steady discrimination against the original residents of the United States.

In exploring sins against people of color the authors tell the agonizing stories of slavery and exclusion. They write that “white evangelicals have a great difficulty in seeing and responding to systemic injustices” (p. 83). This was probably the hardest chapter for me to read, since I am a white male from European (Swedish) extraction and third-generation immigrant. I have lived in places of exclusion and privilege, and I’ve lived as a minority in an African American majority community. The broad strokes with which the authors painted this picture did not correspond to the people I knew (my father-in-law went to the deep South to intentionally plant an integrated church camp in the county of the Grand Dragon of the KKK). I never received any message of “whiteness becoming the embodiment of all that is good, true, and honorable” (p. 84). But, like I said, this book provokes deep responses.

The authors also dive into the church’s engagement with the LGBTQ community. Our track record is poor and so is the culture’s at large. The authors make a strong argument about Romans 3:23, stating that “all have sinned and fallen short of the glory of God” means everyone, not just those who identify as homosexual. When it comes to whether same-sex orientation and relationships qualify as sinful behavior, the authors duck the issue saying, “but in this chapter we won’t debate that” (p. 130).

This is a great book for a small-group discussion. The authors paint issues with broad strokes and too often employ hyperbole to describe the white evangelical church. White males who read this book will probably be on the defensive most of the time. I’m trying to pay attention to my reactivity and explore it. Are the authors pointing out something I am avoiding or blind to? Maybe. Do the authors lump the white evangelical church all together in one simplistic target? Sometimes that seemed to be the case.

The topics addressed are real and serious ones that should always be scrutinized through the lens of Scripture and the person of Jesus Christ. This book raises legitimate concerns about when the church (or individual Christians) establishes a hierarchy of sins according to its culture and not according to the Bible.

The call at the beginning of the book is for confession to “tell the truth about God, about us, and about our actions” (p. 10). The question beneath the question is, whose truth? The truths portrayed here are not always the truths I’ve known and experienced. The book describes indisputable historic truths like the horrors of lynching and the truths of Japanese internment camps during WWII. We are not a pure and righteous nation. We have sinned. About that there is no doubt. But so too has every culture in every time. Sin is well known in white men and black men, in Asian women and Jewish women. As the authors appeal to Romans 3:23, they seem to miss that it continues to apply to all people in all time. We all have sinned and fall short of the glory of God.

So my criticism of this book is that I felt scolded as I read it, knowing that in each coming chapter I would be portrayed as in the wrong and told to repent. That became wearisome. The topic remains vital; it was the tone that was harsh for this reader. I also wished for some liturgical advice for pastors and church leaders who read this book. While the book highlights areas that the church needs to examine, I would have appreciated some steps beyond the written lament. But if you want to read a book in a group that sparks discussion, this book will fill the bill.

Don Johnson is pastor of Montecito Covenant Church in Santa Barbara, California. Citing the late Edwin Friedman, he says toxic systems and behaviors recirculate unless they are addressed and disempowered. In this issue Don reviews Forgive Us , which addresses a number of “unpaid bills” that have deeply troubled the American church. Don loves to swim in the ocean year-round to remind him of the big waters that cover the earth.