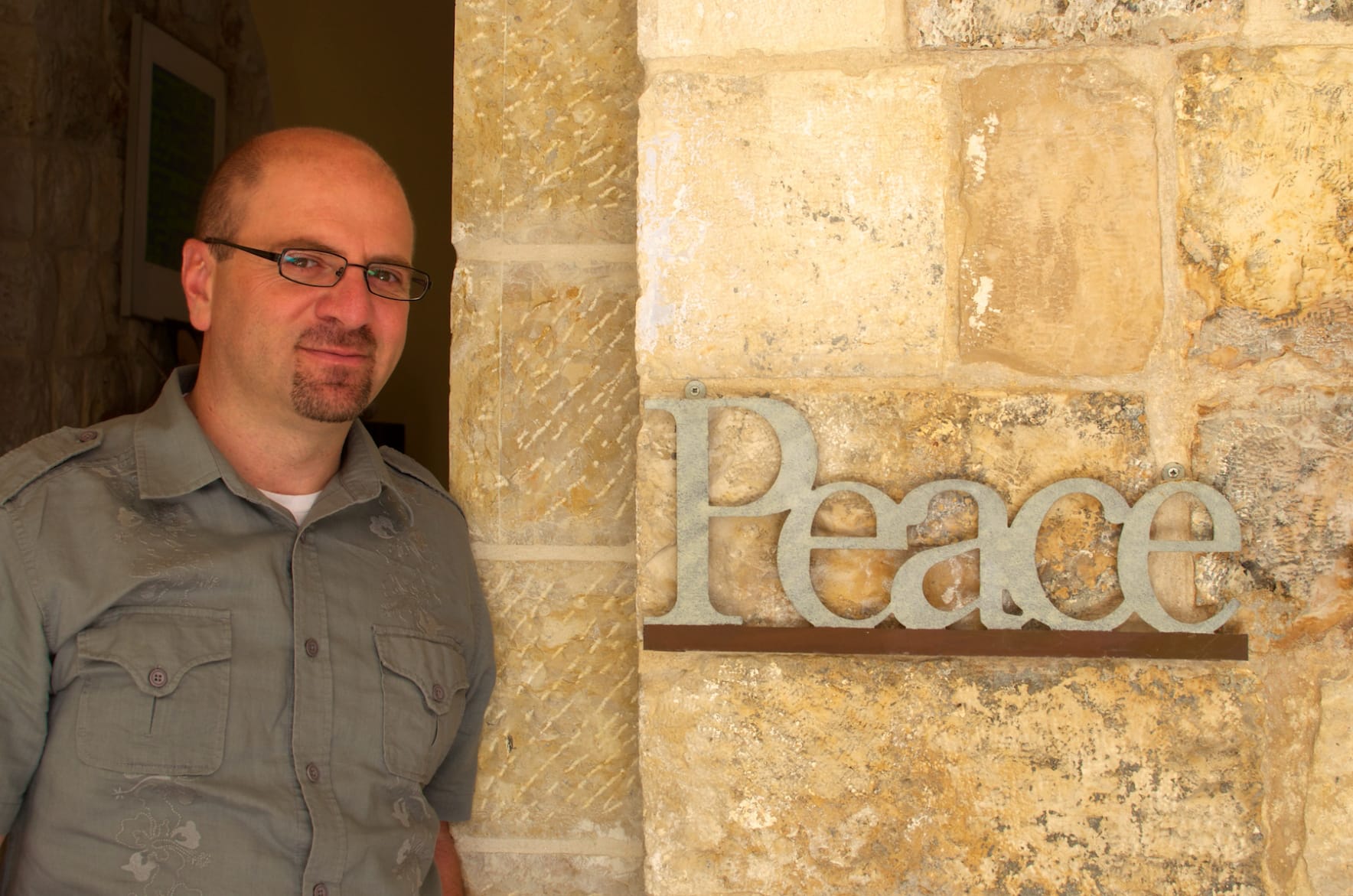 When American evangelicals say they are 100 percent pro-Israel, they communicate something else to Palestinian Christians.

[/vc_column_text][/vc_column][/vc_row][vc_row][vc_column width=”1/1″][vc_column_text]BETHLEHEM, WEST BANK (June 23, 2016) — Many Palestinian Christians feel wounded, even betrayed, by American evangelicals who offer unqualified support for Israel without considering the suffering of their Arab brothers and sisters in Christ.

“To many Americans evangelicals, we are irrelevant,” laments Yohanna Katanacho, the academic dean of Nazareth Evangelical College (NEC). Or, he adds, they equate all Palestinians with terrorists.

Katanacho said he wants American evangelicals to realize that they are members of the same body as Palestinian Christians and to remember the words of the Apostle Paul in Romans 12—“If one part suffers, every part suffers with it”—as well as his admonition in 1 Corinthians 12 to “mourn with those who mourn.”

For Katanacho and other Palestinian Christians, that means asking the American church to hear their views on the conflict raging in their region and to do so without prejudging or preconditions. “We need Christians to listen to the pain of all the people in the land,” said Sami Awad (top photo), founder and director of Holy Land Trust, a nonprofit organization in Bethlehem that seeks to build peace through nonviolence.

The Evangelical Covenant Church and individual congregations have been doing more listening lately. They are developing closer relationships with Palestinian Christian organizations that are committed to reconciliation and theological education institutions, such as Bethlehem Bible College (BBC) and NEC.

Covenant World Relief helped sponsor the latest Christ at the Checkpoint Conference earlier this year. It was the fourth biannual gathering to focus on reconciliation in the region. A dozen Covenanters, including North Park Seminary dean Dave Kersten and Canada Conference superintendent Jeff Anderson, attended.

BBC president Jack Sara said, “We are honored by the growing cooperation and partnership with the ECC, through support, advocacy, and sharing of knowledge.”

To many American evangelicals, we are irrelevant – Yohanna Katanacho

[/vc_column_text][/vc_column][/vc_row][vc_row][vc_column][vc_column_text]Especially in the United States, many evangelicals ascribe to the theological view that God promised that the Jews would return to the Holy Land, and that the creation of Israel in 1948 fulfills biblical prophecy. That belief can play out in the secular arena when politicians, backed by evangelicals as well as other segments of society, declare they are “100 percent behind Israel.”

“I would say that using political and theological beliefs to filter out Palestinian voices, to filter out my pain and my cry is the biggest challenge and danger we face by American evangelicals who are completely pro-Israel,” Awad said.

To not listen to those cries and voices, Sara said, is to forget, “God loves my people, the Palestinians.”

Recent Pew Research studies reveal the wide chasm between American and Palestinian evangelicals. A study released this past March reported that nearly 80 percent of Christians born in Israel or East Jerusalem believe the existence and growth of Jewish settlements are harmful to Israel-Palestinian relations, and 86 percent believe the United States is too supportive of Israel. That study also reported that 50 percent of Israelis want all Palestinians removed from Israel.

By contrast, a 2013 study found that only 12 percent of white evangelicals in the United States and 16 percent of black Protestants believed America was too supportive of Israel.

“My world has become a world of death and hate,” said Katanacho, “I live in a society that doesn’t want its inhabitants to be Palestinian.”

Katanacho and other Palestinian evangelicals openly and routinely speak out against regional violence including by Palestinians, but they complain that pro-Israeli viewpoints are almost always the only part of the story that is shared. For example, Jews and many American evangelicals celebrate May 14, 1948, the day Israel was declared a state. However, Palestinians – including Christians – call it the Nakba (“the catastrophe.”)

For them, the catastrophe continues, they say. Palestinian Christians want American evangelicals to know that they face daily injustices . They do not share many of the same rights as non-Arab Israelis and even American tourists. Travel restrictions, for example, prevent many Palestinians from ever visiting some of the holiest Christian sites.

Then there is the wall.[/vc_column_text][/vc_column][/vc_row][vc_row][vc_column width=”1/1″][vc_single_image image=”30628″ alignment=”center” border_color=”grey” img_link_target=”_self” img_size=”full” css=”.vc_custom_1466720855024{margin-right: -80px !important;margin-left: -80px !important;}”][/vc_column][/vc_row][vc_row][vc_column width=”1/1″][vc_column_text]Israel has erected a wall that stretches around 75 percent of the West Bank. In most places it is topped with barbed wire, but in others, such as in Bethlehem, it is made of solid concrete and stretches 26 feet high, twice as tall as the Berlin Wall. Each day, those Palestinians who are allowed to work in Israel must pass through checkpoints to get to and from work. The process can take up to several hours each morning and evening. Many Palestinians are not allowed to visit family members on the other side of the wall.

International organizations such as the United Nations have criticized Israel for constructing the wall and especially for taking additional land to construct it. The differences in narratives can be seen in how it is referred to. For Israelis, it is the “security wall”; to Palestinians it is the “separation wall.”

Jewish settlements have displaced Palestinians from their lands, much of which has forcibly been taken from occupants whose families had lived there for centuries. Thousands of acres of orchards have been torn down and businesses forced to move. In Hebron, wire mesh has been stretched between buildings on either side of the marketplace because settlers throw trash and body waste down onto the market. Israeli forces protect the settlers.

One soldier said that the ultra-orthodox settlers “just want us to kill Palestinians.”

“There is a double standard when it comes to contemporary reality,” Munther Isaac, academic dean at BBC told the audience during the Christ at the Checkpoint conference in March. “Almost every time I speak to a (Western evangelical) group I am asked, ‘Do you acknowledge Israel’s right to exist?’ It’s quite amazing to me that I—the occupied—am being asked to recognize the right of my occupier to exist. Well, does Israel recognize my right to exist, and do you as Christians who seek to defend Israel give me the right to exist and the right to freedom of self-determination?”

Palestinian evangelicals say they grow weary of feeling that they have to constantly justify themselves. “We are always having to prove we are not terrorists,” said Dina Katanacho, director of the Arab Israeli Bible Society and wife of Yohanna. “I am not a terrorist. You don’t have to be afraid of me. Why do I have to say that every day?”

It’s quite amazing to me that I, the occupied, am asked to recognize the right of my occupier to exist. Well, does Israel recognize my right to exist? – Munther Isaac

[/vc_column_text][/vc_column][vc_column width=”1/2″][vc_single_image image=”30634″ alignment=”center” border_color=”grey” img_link_target=”_self” img_size=”full”][/vc_column][/vc_row][vc_row][vc_column width=”1/1″][vc_column_text]She doesn’t expect everyone to agree with her, but she, like others wants to be heard. They point to the Larnaca Statement, an agreement reached between Palestinian Christians and Messianic Jews last January to honor and engage with one another positively despite vast differences in their theologies and narratives. At the core of the agreement is their belief that all share in the unity of Christ.

Many Messianic Jews see the return of the Jews to the land and establishment of the state of Israel as a sign of God’s faithfulness and that Israel must control the territories as necessary to maintain security and prevent further violence.

Yet, according to the statement, “Many Palestinian Christians see the presence of the Christian church in their land as a testimony to the faithfulness of God, and the establishment of the state of Israel as a catastrophe for their people. They see the Palestinian refugee problem, the lack of equality within Israel, the ongoing occupation, and the expansion of settlements on Palestinian land, as illegal and unjust. They perceive their survival and duty to involve resistance to these injustices by peaceful, legal and non-violent means.”

The statement continues, “In spite of our different views, we commit ourselves to listen to one another, to learn from and respectfully challenge the narrative of the other, to critically evaluate our own narrative and to work towards an inclusive, bridging narrative.”

Palestinian evangelicals hope their counterparts in America will do the same.

Videos from the Christ at the Checkpoint conferences are available online.

Photo of the wall and Munther Isaac by Andrew Larsen.