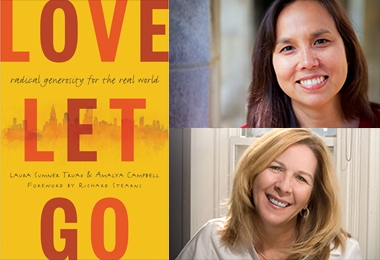 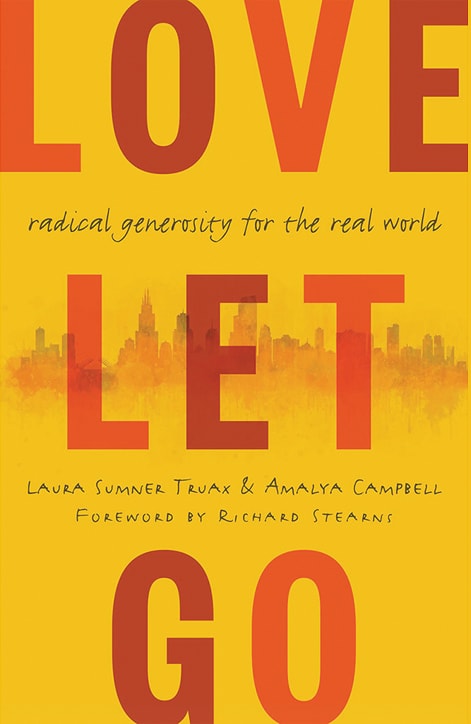 The idea of gratitude journals used to make me a bit skeptical. If you have to make yourself write down what you’re thankful for, do you really feel grateful? Or is such intentionality perfunctory by nature?

Then one of my kids was going through a hard season, and I was feeling anything but grateful. And one day I finally got it. Looking for something to be thankful for, especially when it’s not easy, is exactly the point of such a practice. The act of seeking out moments of grace when they seemed impossible changed my outlook. I realized I never would have noticed the small gifts that did come along if I hadn’t been deliberately looking for them.

In Love Let Go Laura Sumner Truax and Amalya Campbell talk about learning to reclaim our identities as giving people. “We learn thankfulness by thanking,” they write. “That’s what those gratitude journals are all about. It’s the ongoing habit of naming our blessings on a regular basis…that leads to the benefits of better health, deeper sleep, and greater connectedness with others.”

Their book tells the fascinating story of how radical generosity changed their community at LaSalle Street Church in Chicago, where Truax serves as senior pastor.

Back in the 1970s the church had partnered with a handful of other faith communities to build some much-needed low-income housing in the city. Thirty-five years later the property was sold, and LaSalle’s portion of the proceeds was an incredible $1,530,116.78.

The amount was approximately double their church budget. And they were in the midst of a $50,000 deficit. What would they do with all that cash?

This is the intriguing account of how the church figured that out.

After some initial discernment among the leadership, they decided to start by giving each person in the congregation a check for $500, with the instructions to go out and do good in God’s world. It was a tithe of the full amount, and they named the campaign LoveLetGo.

Some people sent their share of the funds overseas to organizations doing good in the world. Some gave theirs back to the church. One homeless man in the congregation rounded up his friends who lived under the viaduct and took them to a show and a restaurant for dinner. “For the whole day it didn’t feel like they were homeless,” he said. “It was a good feeling to help somebody out like that.”

Another man named Dan wanted to give away his money in person $20 at a time. He knocked on the door of a daycare center in his neighborhood to ask if one of the parents might be in need. The woman who opened the door responded with skepticism. No, she didn’t know anyone who would need that, she said as she tried to close the door. When the man repeated his offer, explaining that it really was a free gift, she hesitated. Finally she asked, “Could I keep it and use it myself?” It wasn’t the response he expected, but he said sure, if she really needed it. “She blessed him and called him an angel, saying she never thought she would see an angel. With tears in his eyes, Dan blessed her back.”

Narratives of such individual decisions are interspersed with sociological research about giving, what makes a happy life, or psychological hurdles we face in our efforts to live generously.

But what makes Love Let Go so compelling is the long, slow process LaSalle Street Church went through to decide not only where the rest of the money should go but who they were as a congregation and who they were becoming. The authors talk about listening inside out (brainstorming, researching, and meditating) and listening outside in (paying attention to the needs of the world and their community—identifying “the sweet spot of generosity comes at the congruence of identity and unmet needs”). They practiced thankfulness—and they let go.

What makes Love Let Go so compelling is the process LaSalle Street Church went through to decide not only where the money should go but who they were as a congregation and who they were becoming.

A quick search on Amazon for book titles with the word “generosity” can produce an overwhelming list. Often such reading can make for guilt-inducing despair. How many of us can claim to be truly generous all the time?

Love Let Go is different. I couldn’t put it down. The transformation that began in this one congregation seems accessible, as if readers could join the movement. And the generosity unleashed didn’t stop with this project—one year after LaSalle distributed the $500 checks, the church was asked to help sponsor refugees arriving in their community. They needed housing and expenses for a newly arriving family. That meant raising $6,000 in three weeks. It was more than a little daunting.

Sumner and Campbell write that the church had realized that “the dollars they gave through LoveLetGo looked awfully similar to the dollars sitting in their wallets and bank accounts.”

And in the end, “That’s where generosity starts. With where you are and who you are right now, at this very moment.” Amen.