A Slice of Pietism 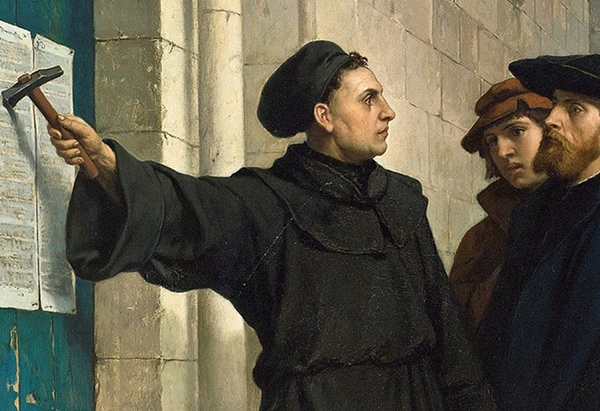 A Slice of Pietism

(or arguments) on a church door in the town of Wittenberg. Within four years, he had been excommunicated and the Christian family tree had broken into Catholic and Protestant branches.

Or so the story goes.

In truth, the Reformation was not so much an event as a process, both older than Luther and continuing into our own time.

“Reformation” had been talked of for at least a century before the Ninety-five Theses, as European Christians dreamed of restoring the ideal form of an increasingly corrupt church. Even after Luther burst onto the scene, he was just one of many reformers: some stayed in the Catholic Church; others followed Luther in trying to start fresh. As new denominations and traditions took shape, Protestants continued to wrestle over the meaning and implications of Luther’s principles: “salvation by grace alone through faith alone,” “the priesthood of all believers,” and “Scripture alone.”

And they rarely felt satisfied for long with the results of their reforms. After all, if Luther was right that the individual Christian remained “simultaneously saint
and sinner,” why should a community of Christians be any closer to perfection?

So I suggest that we keep in mind another historic Protestant slogan: that churches like ours must be both “reformed, and always reforming.”

Seen in this light, the 500th anniversary of the Ninety-five Theses is not only an occasion to celebrate Luther’s Reformation. It is a time to recommit to an ongoing reformation. Indeed, that’s our heritage in the Evangelical Covenant Church, since we’re a “Reformation church” that inherits its Protestant beliefs by way of a later attempt at continuing reform: the movement known as Pietism.

Protestants, says historian Alec Ryrie, “have always known that their religious life is flawed and inadequate, and no sooner create an institution than they suspect it of calcifying into formalism and hypocrisy.” There’s no better example of that theme than the late seventeenth-century movement of Pietism, which Ryrie says brought about “a rekindling of the love affair with God that had been Protestantism’s beating heart since Luther and that had run through its veins ever since.”

What Ryrie means is that Protestantism has always had less to do with intellectual belief than with the lived experience of God’s love—which then flows into love of our neighbors. But as a young Lutheran pastor named Philipp Spener looked at German churches in the 1670s, he saw too much “dead orthodoxy” and too little heartfelt faith. 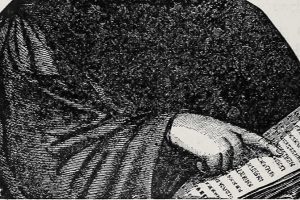 Spener had grown up at the end of the Thirty Years War (1618–1648), in which Catholics and Protestants slaughtered each other at a rate not surpassed until the world wars of the twentieth century. The price of peace was that Germans stayed divided among competing churches, which spent more time cultivating political connections and bickering over their doctrinal confessions than encouraging spiritual growth or social reform.

Spener and his followers instead preached a simplified faith that was made active in love of others. Mockingly called “Pietists” by their critics, they published Bibles, wrote hymns, prayed in small groups, and shared their stories of conversion. They also cared for the sick, gave homes to orphans, educated children of all social classes, and sent missionaries around the world—all in the confident hope that God brings about “new life” for individuals and “better times” for the church and the world. They even dared to suggest that Christians should avoid “needless controversy” on minor doctrinal issues and instead try to reunite the body of Christ.

While Spener’s movement eventually faded in Germany, the Pietist ethos of living faith kept reappearing in other corners of Christianity. For example, in the mid-nineteenth century a pietistic revival swept through Sweden. One of its leaders, C.O. Rosenius, contrasted Pietism with the nominal Christianity he saw in the state church: “A Pietist is the one who not only has the name, the semblance, and the shell of godliness, but the very thing itself, the reality, the kernel, and is a living product of God’s word.”

Many of these Swedish Pietists joined the great migration to the United States, where they founded the Mission Covenant in 1885. Throughout the history of our denomination, Pietism has continued to give Covenanters hope in the midst of conflict and uncertainty. As our president Gary Walter often says, our love of God and neighbors flows out of “our spiritual lineage of Pietism” and “will help us contribute to the shalom of a broken society.”

So how can our Pietist heritage help us to take up the ongoing work of reformation, five hundred years after Luther? How can we cultivate a living faith in our own time?

First, we need to recognize that Pietism requires a conscious decision. It can’t be inherited from family or absorbed from the surrounding culture. It requires us to reject the anxious pull of fear, the angry rhetoric of division, and the deceptive security of power and prosperity.

To choose the Pietist option is to opt in to a distinctively hopeful way of following Jesus Christ: to seek to grow more and more like him, to live at peace as part of his body, and to fulfill his mission in service to others.

If you want to choose that option, then you might start with three actions:

#1 Come to the Bible as “an altar where one meets the living God.”

In most respects, Spener thought he was simply recovering what Luther had already taught, starting with extensive use of Scripture. “The more at home the word of God is among us,” Spener wrote, “the more we shall bring about faith and its fruits.”

Not only by hearing the word preached, but by personal and small group Bible study, he dreamed that Christians’ “spiritual life will be wonderfully strengthened and they will become altogether different people.”

In a time when the Bible is no more than an iPhone away, we can be fooled into thinking that God’s word is already “at home…among us.” But we sometimes read the Bible in ways that protect us against its transformative power. We use it like a rulebook or we cherry-pick our favorite proof-texts. But at our best, Covenanters have tried to read the Bible prayerfully and holistically, recognizing it as “an altar where one meets the living God and receives personally the reality of redemption.”

#2 Live out your faith in love of neighbor.

“We love God’s word,” Walter told delegates to the 132nd Annual Meeting in June.“We ask, ‘Where is it written?’ and do our best to align with it, even when it is costly to do so.” But “Where is it written?” is most meaningful in light of another familiar Covenant question: “How goes your walk with Christ?” Reading the Bible is a kind of study that doesn’t only change how we think—it changes how we act.

“It is by no means enough to have knowledge of the Christian faith,” wrote Spener, “for Christianity consists rather of practice.” In the twentieth century, Covenant theologian Don Frisk noted that “our forefathers rarely asked, when they met their friends and neighbors, ‘What do you believe?’ But sooner or later they were sure to ask, ‘Are you alive spiritually?’ ‘Have you found life in Christ?’”

This new life is the result of conversion, but Frisk emphasized that being “converted to Christ is always in
a sense to be converted (turned) to the world. It is to see the world through the eyes of Christ, to share his compassion, to perceive his will for the world, and to strive to follow it.” If we simply “put this love into practice,” Spener believed, “practically all that we desire will be accomplished.”

#3 Form yourself and others for Christian unity.

Alas, it’s hard to love our neighbors when Christians scarcely seem to love each other. “For the whole law is summed up in a single commandment,” wrote the Apostle Paul, “‘You shall love your neighbor as yourself.’ If, however, you bite and devour one another, take care that you are not consumed by one another” (Galatians 5:14-15).

Yet churches are often fractious communities, whether it’s the first century or the twenty-first. Again and again, Paul exhorted early Christians to “clothe yourselves with love, which binds everything together in perfect harmony” (Colossians 3:14), to “maintain the unity of the Spirit in the bond of peace” (Ephesians 4:3).

Nothing less than our witness and our mission depend on doing what Paul urged. Jesus prayed that his followers “may become completely one, so that the world may know that you have sent me and have loved them even as you have loved me” (John 17:23). Those who “bite and devour each other,” by contrast, will make poor ambassadors of Christ’s ministry of reconciliation.

This doesn’t mean uniformity or conflict avoidance. But it does mean that we need to recognize that our old Protestant instinct to separate is worsened by our immersion in a polarized society that is sorting Americans into different tribes. Lest we be conformed to that world, we need to engage in formative practices that make us capable of a countercultural unity.

Of course, that kind of change won’t happen overnight. But churches that are “reformed, and always reforming” don’t offer quick fixes. Instead, we must study God’s word, live out our faith in love, and strive for unity with patience, and in hope.

In the end, the Pietist option is to live in active expectation that the God of the resurrection works through people as imperfect as us, to reform his flawed church and, through it, to renew the weary world he loves so much. 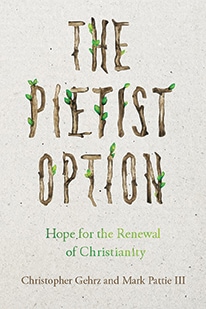 The Pietist Option: Hope for the Renewal of Christianity

In The Pietist Option (October release), Covenanters Chris Gehrz and Mark  Pattie show how Pietism holds great promise for the church—and the world—today. Modeled after Philipp Jakob Spener’s 1675 classic, Pia Desideria, the book makes a case for the vitality of Pietism in our day. With its emphasis on our walk with Jesus and its vibrant hope for a better future, Pietism connects with the ideas and issues of our day. This book offers a revitalizing option for all who desire to be faithful and fruitful in God’s mission.