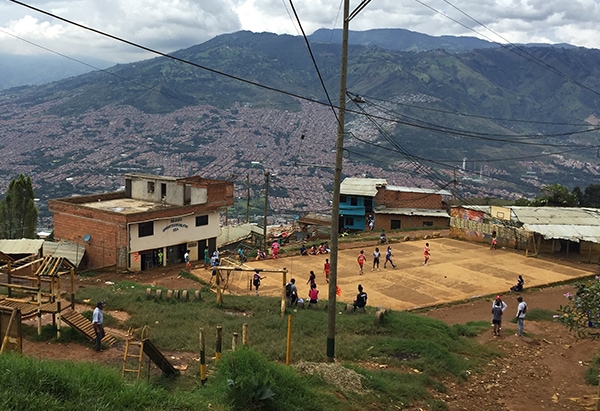 [/vc_column_text][/vc_column][/vc_row][vc_row][vc_column][vc_column_text]The numbers of people who have been forced to leave their homes throughout the world are staggering and growing—imagine the entire population of the United Kingdom or half the population of Mexico having to leave their homeland. How do we begin to understand what that means? While the scope of this global crisis may seem incomprehensible and the solutions beyond our reach, at the heart of the crisis are individuals trying to survive to keep their families together, and to find safe landing. In this seven-part series, we look at the stories of those who have sought refuge and those who have entered into their lives to offer help and support.[/vc_column_text][vc_column_text]This story is Part-seven of the Place of Refuge series. Click here to view additional stories.[/vc_column_text][/vc_column][/vc_row][vc_row][vc_column][vc_column_text]Colombia is no stranger to the global crisis of forced displacement. According to the United Nations refugee agency, Colombia hosts the most internally displaced people in the world, with approximately 7.3 million people forced to leave their homes from 1985 to 2017 due to decades of violence, armed conflict, drug trafficking, and accumulation of land by large landowners.

With no camps for displaced people in Colombia, they are forced to settle in marginalized communities with less access to adequate housing, clean water, education, and job opportunities. The reality of displacement is evident in neighborhoods like Granizal where Marina, who is fifty-two years old, has been living for the past eight years after being displaced from four different territories since 1995. She has had to start from nothing in each new place she has settled, “invading” a territory, arriving in places of high vulnerability and complex problems.

Comunidad Cristiana Shalom, a Covenant church in Medellin, has developed relationships, formed partnerships, and served alongside those who are the most vulnerable in society in holistic ways. Under the leadership of pastor Carlos Diaz, their work with the internally displaced began in 2005 when a family from the church was forced to move to an area primarily made up of internally displaced people (IDPs). Shalom accompanied this family and began to serve in Granizal where approximately 25,000 people live in conditions of extreme poverty and vulnerability.

“Shalom’s presence in this community has been transformational over the years,” explains Pastor Carlos, “beginning with prayer groups and health brigades, later planting a local church, and in 2013 developing a community foundation: Transformación Comunitaria para la Paz (TCP). It was developed in collaboration between Shalom Covenant, the Asociación Pacto Colombia, and DIGNI (a Norwegian Christian NGO).”

Shalom was given economic resources from DIGNI in order to initiate and develop a project for a period of five years. TCP coordinator Cristina Monsalve says, “After almost a year of listening and walking alongside the local people, TCP created four areas of focus: investigation, consultation, projection, and formation. The objective was to address the causes of the actual situation of the people who were living in Granizal and to help the local community to know their rights and advocate for themselves.”

The foundation also used sports and recreation as a way to protect children and youth from getting involved in gangs, drugs, and other illegal activities present in Granizal. Knowing that children and women suffer most from displacement, the TCP team learned that there was a group of female teenagers that wanted to practice some kind of sport, but there was nowhere in the community for them to do so. A soccer tournament that engages teenage women was initiated. This tournament (Women Have a Right to Play) has been offered for the past five years and involves around a hundred teenagers and their families, as well as community leaders who serve as coaches.

“Not only does Transformación Comunitaria para la Paz equip us to be better in sports, but more importantly it helps us as youth to develop on a personal level, improving our daily lives,” says Yurani, a seventeen-year-old who has participated in the program since it began. “I am so grateful because it has been the only organization that has invested in us teenagers in this community.”

Yurani participated in the formational process of the program, which included learning how to resolve conflict. Through the conflict resolution focus she saw major changes in the way teams and participants interacted. This year Yurani has appreciated the opportunity to learn more about God through the Alpha series that they are going through together. She has also grown from being a player into being a coach. “I wanted to coach because I want to transmit what I have been learning over these years to girls who are just beginning in the process.”

At the invitation of community leaders, Shalom Covenant has begun working in another displaced community nearby called Manantiales. Here, alongside local leaders, they are developing projects that seek to support two vulnerable populations: the elderly and pregnant women/new moms. In collaboration with Shalom, the Covenant foundation called Hands with Hope has begun providing entrepreneurship classes in this displaced community in response to the desire of people to create a sustainable income for their families.[/vc_column_text][/vc_column][/vc_row]