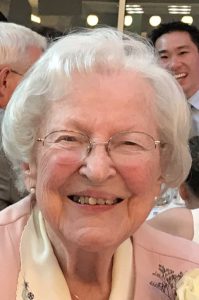 Janice was born October 26, 1924, in Tonawanda, New York. She earned an associate’s degree at North Park Junior College and then her RN at Swedish Covenant Hospital School of Nursing.

Janice liked to say she was active in every organization in the church except the men’s group—and she hosted and fed them.

She was preceded in death by Warren in 1985. She is survived by a daughter, Ann (Timothy) Carlson; a son, Kurt (Kristin) Swanson; four grandchildren, and five great-grandchildren.

A celebration of life service will be held at 2 p.m. Sunday, May 27. at The Holmstad. Memorial gifts may be sent to The Holmstad Benevolence Fund, 700 W. Fabyan Parkway, Batavia, IL 60510.