Delegates Vote Down Discussion on Sexuality 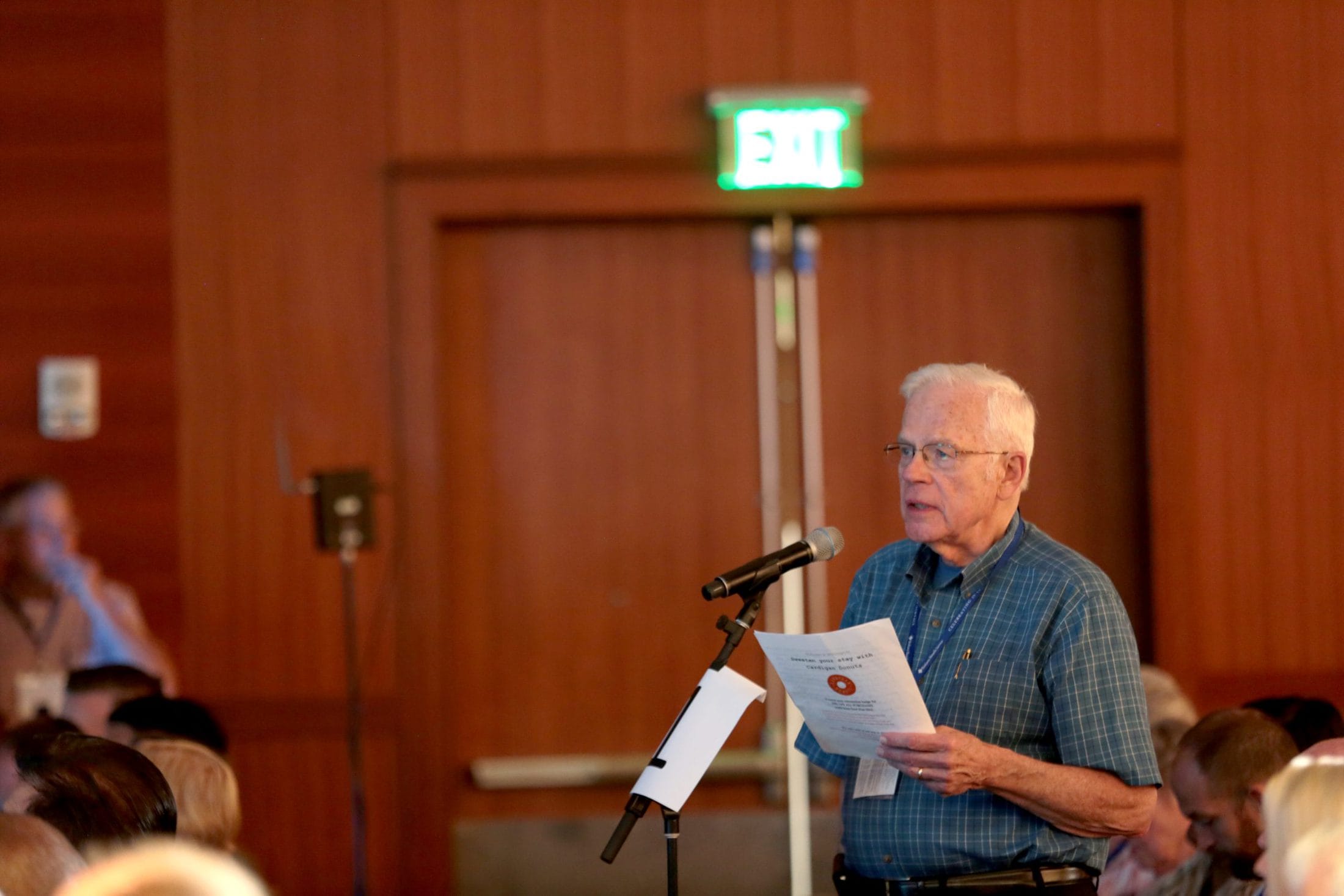 MINNEAPOLIS, MN (June 22, 2018) – After intense debate, delegates to the 133rd Annual Meeting of the Evangelical Covenant Church, defeated a motion that would have added an agenda item that would call for forming a task force for the purpose of studying the denomination’s stance on sexuality.

The denomination’s official guiding position is, “Faithfulness in heterosexual marriage, celibacy in singleness.”

Those opposing the motion stated that the issue has long been settled. Delegates in support of the motion contended that the Covenant has always been willing to discuss issues and that a “no” vote would be a break from that tradition.

Herb Hedstrom, a retired Covenant pastor and member of North Park Covenant Church in Chicago, introduced the motion that would form a task force that would include three lay members and a pastor from each conference and would include “gender, racial, theological, and sexual diversity.” Two North Park Theological Seminary faculty members who hold differing views would be appointed by the school’s dean to lead the task force. The goal would be to present a recommendation for consideration at the Annual Meeting in 2019.

“We disagree within the Covenant, within our congregations about all sorts of things, and we’ve all prided ourselves on that unity in Christ first of all and foremost,” said Hedstrom, who noted that this year’s gathering was the forty-fourth he has attended. “That hallmark has allowed us to model Christ both in how we agree and how we disagree with each other. I believe it would be wise to pause and to reflect on the historic roots as a denomination and to re-enter a period of discernment on the topic.”

Hedstrom emphasized, “The motion asks not that we change our position but that we establish a path for discussion.”

Several delegates spoke against adding the motion to the agenda. Paul Knight, pastor of Hope Covenant Church in Grand Forks, North Dakota, said, “We’ve been having discussion on this since 1996.”

Wayne Park, lead pastor of Woven Covenant Church in Houston, Texas, and president of the Covenant Asian Pastors Association, also spoke against the motion. Park said he saw how discussing the issue “tore apart” the Presbyterian Church of the United States of America.

Rich Theilen, interim pastor of Salem Covenant Church in Pennock, Minnesota, stated, “We have twice as a denomination affirmed a clear position that is theologically sound and pastorally sensitive.”

In support of the amendment, Doug Bixby, pastor of Attleboro (Massachusetts) Covenant Church, said, “We can say we have discussed this but there hasn’t been a motion since 2004.” He added that the large number of delegates at the meeting—the third largest in Covenant history—was due to the desire of many people to discuss the issue. “If we ignore this issue, if we stop talking about it, we will fail people in our churches and in our families.”

Pete Hawkinson, pastor of Winnetka (Illinois) Covenant Church, spoke in favor of adding the motion to the agenda. “The truth is as it has been throughout our history a discerned position. But we are in a relationship around it. In order to do that, we need to continue to discern. Discernment is not a historical issue. It’s an ongoing reality.”

Mark Nilsen, pastor of Salem Covenant Church in Worcester, Massachusetts, told the gathering that he has one son who is straight and another is gay. He then noted that as a pastor he won’t be able to officiate either of their weddings because he is barred from officiating at same-sex unions. “I will not do for one what I am not able to do for both,” he said.

Susan Johnson, who has served as chair of Community Covenant Church in West Peabody, Massachusetts, for the past six years, said, “There is not one detail that my congregation agrees on,” but added, “it is in the discussion that the light shines. To be Covenant means we can disagree and in agreeing and disagreeing, we discuss.”

Frank Kunkel, a delegate from Eastside Covenant Church in Tucson, Arizona, stated, “We are the leaders of our church. We are sent here as representatives of our churches, and regardless of my personal opinion, mister moderator, I feel I would be remiss in my duties as a leader and a representative if we do not at least discuss things that I know we all discuss in our church. It would be a dereliction of duty ignoring what we are being sent to do, sir.”

In the end, two-thirds of the meeting voted against the motion.