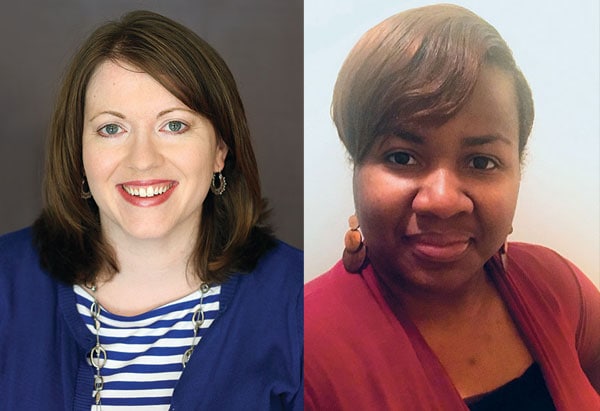 Recently Devyn Chambers Johnson, co-pastor of Community Covenant Church in Springfield, Virginia, hosted a daylong seminar called Talking with Children about Race. She invited fellow Covenanter Rukiya Davis from Windsor Mill, Maryland, to be the presenter. Davis earned a master’s in Christian ministry from North Park Theological Seminary and recently earned her master’s of social work. “From my perspective,” Davis says, “there aren’t a lot of clinically trained people who work with children and families in need inside the church. I want to advocate for people who are caught up in the foster care or assistance systems.”

Why did you create the Talking with Children about Race seminar?

Devyn: My husband and I have two biracial children, Rosie (five) and Susanna (two). I grew up in the suburbs of Seattle in a very white area, and I was very naïve about race. My husband, Ryan, grew up in Rockford, Illinois, where they were still busing kids in the 1990s to desegregate schools. Becoming parents of biracial children changed our worldview. I try to see the world as my children might see it, especially now when they can’t verbalize it. I am very aware when they are the only people of color in the room.

Who was it for?

Devyn: The playgroup I was running in the church was more diverse than the surrounding neighborhood. I think part of that was because of our family. People started talking about what it is like to raise their kids in a mixed-race context. Several of the women were in biracial relationships so it was a conversation they wanted to have. They especially wanted to know how to talk to their children about race. We wanted to be proactive about helping parents hold great conversations in people’s homes.

What were your goals for the event?

Rukiya: The most important thing for me was that we create a safe place to talk about bias and fears. I wanted each participant to reflect on their own personal journeys. Our stories shape our definition and thinking about race and culture.

We talked about our first memories related to race. We explored some history about race and the definitions of ethnicity and talked about some case studies on how children view race. It was eye-opening for many of them. Some of the parents were a little alarmed that they hadn’t had the conversation, but everybody was glad to have the opportunity to share and to learn.

The group was really transparent, honest, and vulnerable. I felt like it was really the right time for this conversation in that church.

How did participants respond?

Devyn: We had forty adults from fifteen different churches and various ethnicities there. Rukiya did an amazing job at holding space for conversation. It was so powerful for people to think through what to do when their kids ask questions about race. It had been a burden on my heart, and Rukiya created an atmosphere of trust and opened the door for others to speak honestly. This was exactly what our church needed.