The Alpaca in the Manger 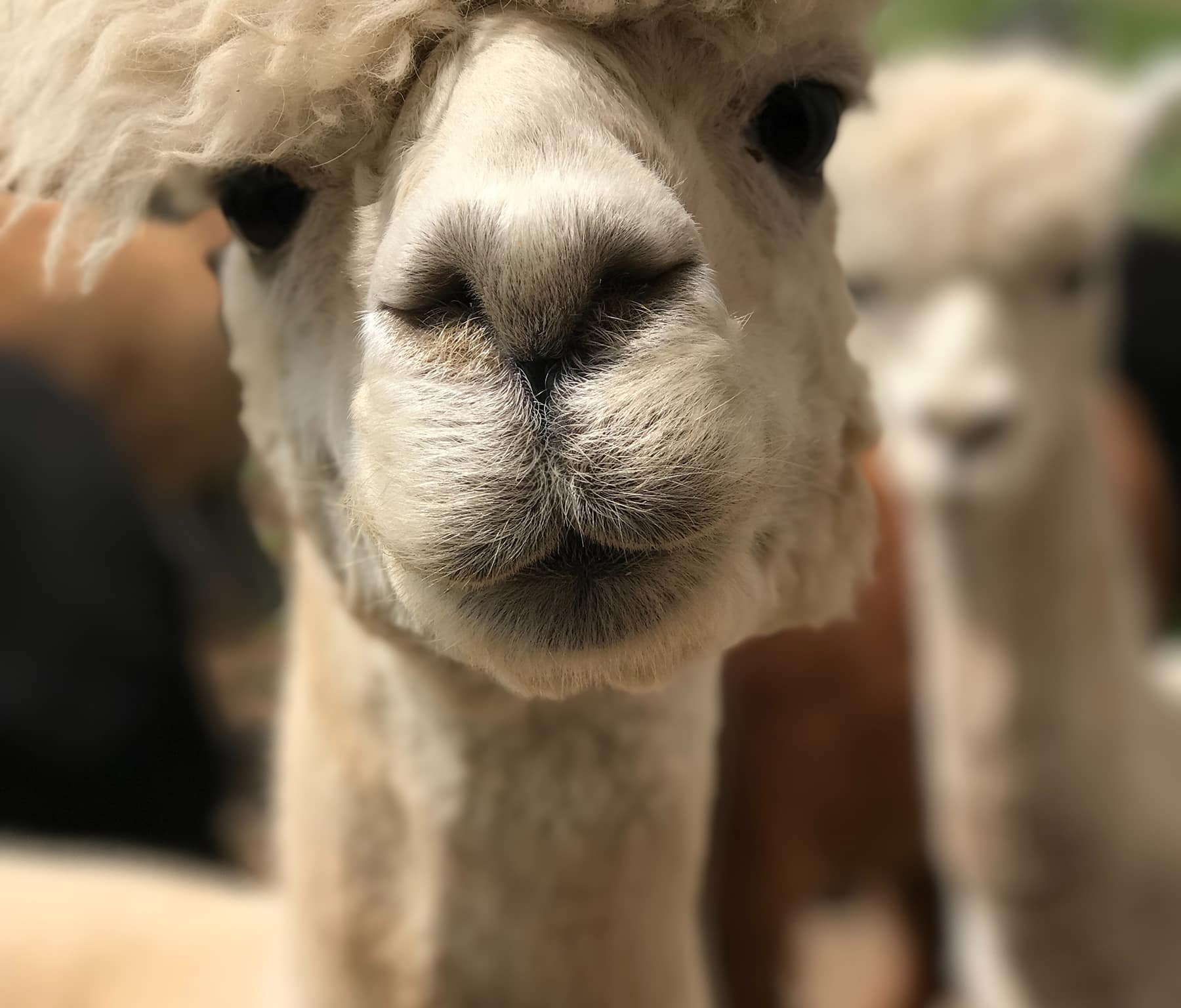 The Alpaca in the Manger

And Other Misapplied Lessons on Christmas

There are so many stories of Christmas. There’s the one of the overtired mom who searches forthe Lego Star Wars Destroyer set, only to find out it’s $159.99—and that’s when she starts to figure out that Christmas comes without packages, boxes, or bags. It’s in your heart.

There’s the one where all the red and green tinselly decorations show up in stores in September right along with the bloody skeletons wielding machetes, and then you’re stuck with trying to somehow process them both even though they are only two aisles away from each other.

There’s the one when you find out some of your friends don’t do the Santa thing, but you do, and you wonder if you are going to heaven after all.

There’s the one where your son has been lectured by the children of these anti-Santa folks and the weary despair on his face when he returns from school with this news is like watching Willy Loman come home
from work.

There’s the one where you try to remember that Jesus is the reason for the season, but you just spent way more than you should have at Hobby Lobby for decorations because you want Jesus’s season to be perfect. Just like him.

There’s the one where you try to eek an old timey Christmas tale out of your grandma and she just gets a rather blank expression and says, “It was the Depression,” and you offer, helpfully, “Oh, did you get an orange in your stocking, like Laura Ingalls Wilder did?” and she purses her lips and says, “We didn’t hang up stockings. We wore them.”

And then there’s the one where the overly sincere parents try to bludgeon gratitude into their children.

It started after our annual Christmas box shopping trip. This is our tradition: my boys pick out gifts to send to children in the DR Congo—without asking me for the Lego Star Wars Destroyer set. It’s a tough gig, so I prepare them with the usual, “Now, you know this trip is just to get stuff for the Christmas box. If you see anything that you might like, you need to file it away under ‘things I want for Christmas but just this once I’m going to let it go,’ and leave it at that.” Both boys nod in agreement, but this speech is always forgotten once we walk into a store. I have a theory that the Lego company laces their boxed sets with pheromones. Even if we are over in the frozen foods section, both boys start quivering and sniffing toward the toy aisle.

I figured that starting in the dental health section would keep us all safe. But as we piled toothbrushes into the cart, Henry longingly stared at the display and whispered, “I wish I had a toothbrush.”

Last night I related all of this to the husband, who blustered, “Were these kids paying any attention when we forced them to watch the black-and-white version of A Christmas Carol last year? Tiny Tim? God bless us, everyone, and all that?” I nodded and pulled the casserole out of the oven. Eyeing the casserole, he added, “We could just not feed them for three days.” That’s when I reminded him about social services.

So, instead, we volunteered to be bell-ringers. Doing so would teach our children that acts of service help us understand the needs of others, and that would make us grateful for all our own blessings. Right?

It seemed like a good idea at the time.

Our slot for bell ringing was from seven to eight at the local Tractor Supply Store on the coldest night in the history of humankind. My children were layered so heavily that they looked like tiny Michelin Men, standing poofily by the sliding front doors of the store, ready to greet the on-comers. Only, there were no on-comers. It was seven o’clock on a Thursday night, and evidently no one really needed supplies. To fill the time, we practiced our ringing. Within minutes, both boys had mastered how to ring that bell with ear-splitting passion. I checked my watch. We had been ringing for seven minutes and thirty-two seconds.

The husband, ever cheerful, suggested we sing a few Christmas carols. I regretted deeply that I had ever agreed to marry this man. He now wanted me to sing to strangers, something that no introvert can do without feeling like she might burst into awkward flames. But, really, the flames might have been a good thing at this point since I could no longer feel my extremities. I grabbed a small child for warmth, not sure which one because of the layers, and sang out, “Joyful and triumphant!” and the child started crying because he could no longer feel his face.

Meanwhile, the other kid had disappeared.

I found him inside the store by the dog beds, and for just a minute we both stood there, gazing at all that cozy woolliness. “I wish I had a dog bed,” he said.

“Come on, kid,” I clapped a hand on his back and stared grimly toward the sliding doors. “They need us out there.”

Except, they didn’t. There was no one. There was no happy clang of pocket change into the bucket. There was no, “Merry Christmas to you!” to all the holiday shoppers, and well-wishing and good feelings. Finally, one customer did come in, but he avoided eye contact on both his entrance and exit. Charlie provided a play-by-play of this poor fellow’s walk to the car. It went something like this, “Well. There he goes. He didn’t give us anything. Not a quarter even. Usually people have at least a quarter, in their car or maybe their pocket. But no. Not this guy. He didn’t give anything at all.”

Meanwhile, Henry had resorted to running in and out of the sliding doors for a breath of warmth, while the husband sang his one-hit wonder, “O Come All Ye Faithful,” yet again with a lot of bravado. I edged away, also toward the sliding doors, feeling rather angry about his insistence on repeating the chorus.

Finally, we had another customer. A double-doored truck pulled up, large and sleek, and out piled a family. We knew them. They attend our church, so they had to give us money. The inside of the truck glowed warmly, and we all sidled a bit closer. The dad was jovial. “Howdy! Quite a cold night for bell ringing, eh?” We nodded, too cold to muster language. “We’re just here to get some food for our alpacas—they gotta eat. Even when it’s cold.” Henry perked up.

“Alpacas? Aren’t those the llamas? The ones that are so—”

And we all nodded. We liked wool.

When our time was up, we decided that burgers and fries were the only way to defrost ourselves. Also, nothing else caps off an evening of helping others than dinner at a chain restaurant.

We were grateful for all of it. The warm air. The large televisions booming everywhere. Our overly cheerful waiter. The mediocre food. We sat and chewed silently, and finally I offered, “Well, that was kind of neat! I think we should do this every year!”

Charlie, ever to the point, said, “Why?”

“Well, because it helps people. People who don’t have much at Christmas. It helps us realize how much they need. It helps us be grateful for all we have.”

“Wait, am I supposed to be grateful I don’t drive a big huge truck and own llamas?”

Henry stared off wistfully. “I really want an alpaca.”

I looked at Brian. He looked at me and smiled. As had so often happened in my misadventures in parenting, what I wanted to happen versus what actually transpired were worlds apart. But it was okay. It made me grateful for a sense of humor. And grace. Grace is gratitude’s big sister, after all.

I looked around the table. Charlie was eating his fries, staring at one of the wide screen televisions that were displayed all around us. He was doing that humming and nodding thing he does when he has food and sports at the same time. Henry was spilling his lemonade and attempting to wipe it up by basically pushing the drink off the table into his lap. Brian was looking up Ted Talks on gratitude on his phone. And I was happy. I loved this gang. We are a mess, and I belong right here with them.

Gratitude does not bludgeon. It alights. And then it gives us a hug and shows us how we fit in this world. In this moment with the greasy fries and thawing toes, I was grateful that this was my fit. I was really grateful for my perfectly imperfect family.

And next Christmas, we will carry on the bell ringing. We must be there. For the alpacas.