At the Hub of Renewal

The Ongoing Ministry of Presence and Trust

Ten years ago, Gretchen Guillette rented a 15-passenger van and loaded it up for a “mobile mission trip” to nearby Northwest Tulsa, Oklahoma. Guillette, who serves as missions and outreach director of Redeemer Covenant Church in Tulsa, had no way of knowing where that journey would take her congregation.

Fifty years ago Northwest Tulsa was a thriving community, but when the oil refineries began to leave town in the 1960s and ’70s, many jobs and businesses went with them. Now, according to U.S. Census data from 2016, half the residents live at or below the poverty line—twice the average of the rest of the state. Northwest Tulsa has the highest incarceration rate for women in Oklahoma. Local school officials say 80 percent of students from kindergarten through high school do not read at grade level.

Initially members from Redeemer, a congregation of around 1,000 people, began to engage the community by helping out at the local elementary school. “We signed up to be lunch buddies and reading partners to kids,” Guillette says. Some volunteers served as aides in classrooms, helping teachers with projects and working with students.

At the time, Jesse was in first grade at Mark Twain Elementary School. His dad was incarcerated, and Jesse lived with his grandparents, along with his mom, siblings, and cousins—10 people in all. A Redeemer volunteer, Lynne Fondell, began serving as Jesse’s mentor, and they met together weekly to work on his homework. Jesse seemed to love their time together, but over time, Fondell began to realize something. Jesse couldn’t read.

With support from the school counselor and his family, Jesse was able to get tested. He and his family learned that he was dyslexic.

The Common Good’s primary goal is to provide resources, services, and opportunities for the children and youth in the 74127 zip code.

So every week for four years, Fondell traveled from her home south of Tulsa to pick Jesse up at school and drive him to tutoring with a dyslexia specialist. They stopped for dinner and then returned Jesse home—a trip that totaled nearly 50 miles. Jesse learned to read and began to succeed in school. He begins his senior year in high school this fall.

As the congregation’s passion for helping elementary students grew, Redeemer’s partnership increased. Coordinating with the science teachers, a group of retired doctors, nurses, and engineers came up with hands-on science classes for fifth-grade students every other week. Some of their activities included building rockets and a tornado wind chamber. They also dissected cows’ eyes and inflated cows’ lungs.

Other volunteers started a rhythm and arts camp held each summer the week after the school year ended. Their goal was to create a place where students could learn, grow, and experiment with rhythm and sound. Around 100 students rotate through percussion, ukulele, hip-hop dance, spoken word poetry, and choir. At the end of the week they host a lunch and concert for the parents.

A Beautiful Day in the Neighborhood

“Beautiful Day” started as a one-day project where volunteers worked on the school grounds. “We cleaned up for teachers, planted flowers, and did general cleanup around the school,” says Guillette.

In 2012, the project expanded. The previous year, a nine-year-old who attended Mark Twain Elementary had suffocated at a city park when sand collapsed on top of her. Redeemer worked in partnership with the city to address safety concerns at that park—the city purchased mulch, and church volunteers spread it across the playground to prevent future tragedy.

Now as many as 200-300 people volunteer each spring for Beautiful Day (it was canceled this year due to the pandemic). They have cleaned out a house that had been pepper-sprayed to help make it habitable again. They have painted curbs with house numbers and cleaned out as many as 31 dumpsters in one day.

Each year on Beautiful Day the church also hosts a sports camp for hundreds of neighborhood kids at Mark Twain Elementary. The students rotate through basketball, baseball, football, and other sports, learning skills and sportsmanship. “Through the sports camp children are able to learn some organized sports and enjoy a fun day of playing,” says Guillette.

Sheri Carpenter has been a counselor at Mark Twain for 13 years. She has witnessed relationships between Redeemer, the school, and the community grow and deepen. “Redeemer started out making gift baskets for teachers and serving as lunch buddies. Now they are fully integrated into the fabric of the school,” Carpenter says. “In a community that has a hard time trusting people, they have earned unending trust and the right to be heard. Our school superintendent says we couldn’t do life without our faith-based partners.”

Redeemer has made a tradition of giving Thanksgiving baskets to families from the school. One year two women from the church brought a basket to a grandmother who was raising her five grandchildren. The children’s parents had been in and out of jail, and their grandmother shared with the volunteers some of the challenges she was experiencing raising the children. As they got to know her better, Redeemer volunteers pitched in to help with home improvement projects and other needs.

One of the children was named Tarissa. “We always noticed her in the background,” says Barbara Rogers, one of the women who first brought the food basket to the family. At the time Tarissa was 10 years old, and she covered her mouth when she talked because she was embarrassed about her teeth. The group introduced Tarissa to a dentist from the church, and Rogers took her to appointments. The dentist addressed some tooth decay and provided Invisalign braces to straighten Tarissa’s teeth, boosting her confidence.

Tarissa is now 21 and earned all As in her final semester of college last spring. She has a job and recently purchased her own car. And she still meets with Rogers regularly. Getting to know the family through the years “has given me the joy of connecting with people,” Rogers says. “It also has helped me see the needs of underserved communities up close.”

Her experience is reflective of Redeemer’s work in Northwest Tulsa. Guillette says, “We got in the messy of the community. When you see a child at lunchtime at school, it is different from being in their homes. Once we were deeper in their lives, we realized the needs were so much greater than we could address just through mentoring.” 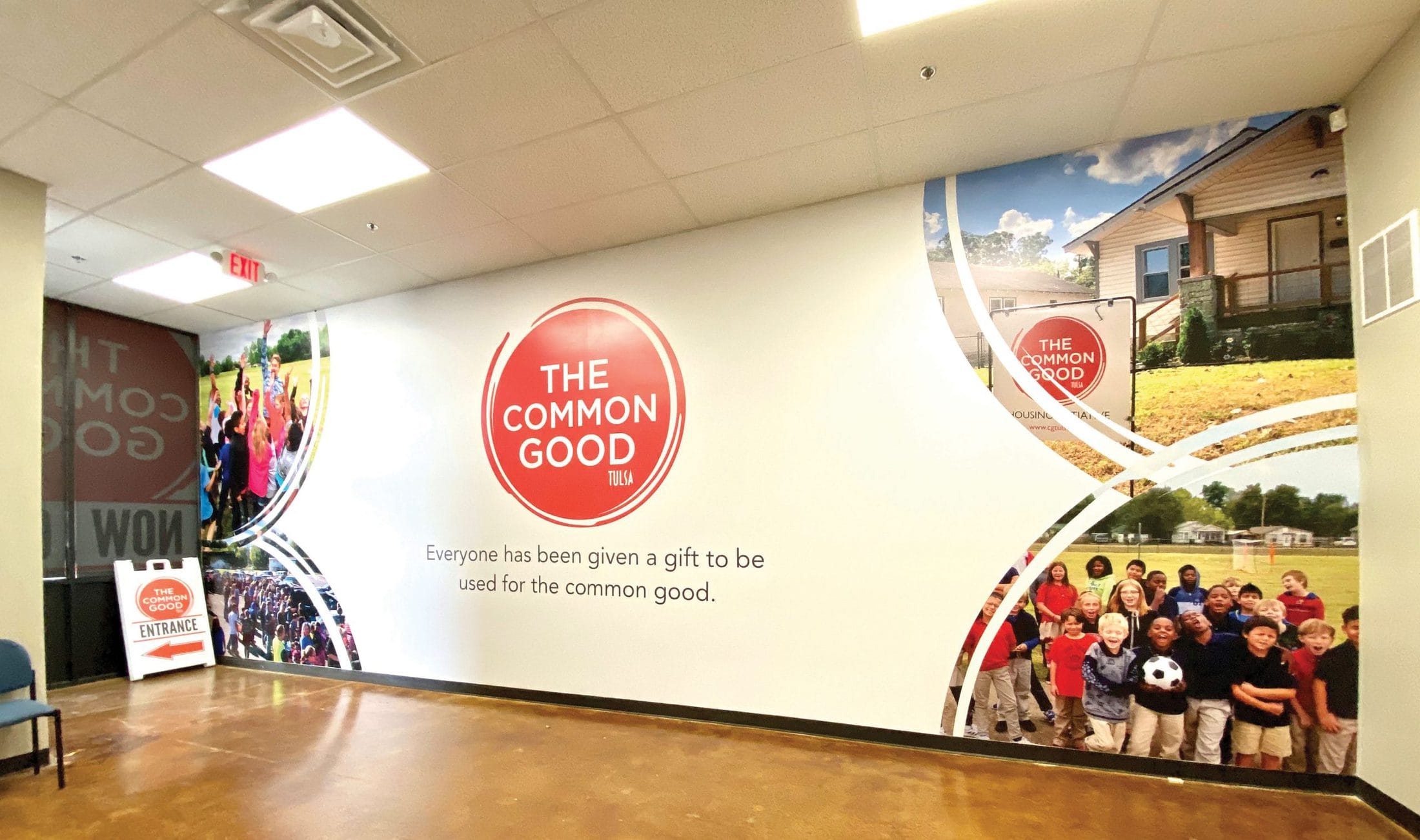 Food for the Hungry

Two years ago Redeemer asked the parents at Mark Twain, “If you were mayor, what would you do for this community?” The number one response was: bring in a grocery store.

When the local Warehouse Market closed in April 2017, Northwest Tulsa became a food desert—the nearest grocery store was five miles away. Only two bus stops are located in that area of town, which means public transportation is not easily accessible to all.

The closing of the 46,000-square foot Warehouse Market galvanized Redeemer to another new venture. A vision was born to help create a place where residents could come together safely. Individuals, local businesses, and foundations joined with Redeemer to purchase the warehouse. Their goal was to establish a community center and grocery store.

In 2019, the Common Good was formed, a nonprofit whose mission is to work for the common good of families in Northwest Tulsa through six essential initiatives: education, career development, mental health, advocacy, housing, and sports/arts programs. The Common Good’s primary goal is to provide resources, services, and opportunities for the children and youth in the 74127 zip code. It is supported through foundations, private donations, and Redeemer.

Last fall, the Hub opened. It is a multi-service facility that houses an after-school program and organized sports. Programming was on hold for a time during the pandemic, but they have reopened on a limited basis. In the mornings community members come in to walk and exercise. Monday through Thursday students come in for organized sports and enriched learning (art, math, literacy). They paint book boxes for the community and learn how to build skateboards. “Some of these students have been kicked out of school for bringing guns to school. Some were throwing firecrackers at our younger students as they left summer camp. But we are getting to know them and building relationships together,” Guillette says. Some local youth pastors are coming in the afternoons to hang out with the kids.

In the afternoons, churches come in to host vacation Bible school. “Since we are a new community center, new churches are getting involved. Those churches will continue to be involved in deeper ways going forward,” says Guillette.

The Hub is dedicated to empowering the community, so staff is hired from within the Northwest Tulsa area. This summer they hired student workers and junior high helpers to assist in summer programming. “We are really trying to train up workers,” says Guillette. “They are learning how to work, some of them for the first time. For many of these students they are literally the first person in their families to hold a job. Their families are either chronically unemployed or on government assistance. So they are really proud of themselves.”

In June, the Hub started distributing food through the government-funded Go Fresh campaign in response to the coronavirus pandemic. As of July, the Hub had distributed more than 200,000 pounds of food with more distributions set to happen throughout the summer.

Plans are in the works for Common Good to bring a grocery store back to the community that will hire from the neighborhood. The site will host greenhouses, gardens, and hydroponic gardens to help supply the produce for the store. It’s a complex and expensive project, but they hope to establish the store by the end of 2020. Ultimately, the grocery store will pay rent to the nonprofit to help offset the costs of the community center.

Bill Clark, who founded Redeemer in 1987, was called to return as lead pastor in 2015 after a 17-year absence during which he served two other congregations. “I was astonished at the work the church was doing to meet the needs of Northwest Tulsa,” he says. “More than 200 members were working to engage that community.”

“Working in Northwest Tulsa has taken our eyes off of ourselves” says Clark, who is retiring at the end of the year. “It has given us a systematic and focused way to reach our community.”