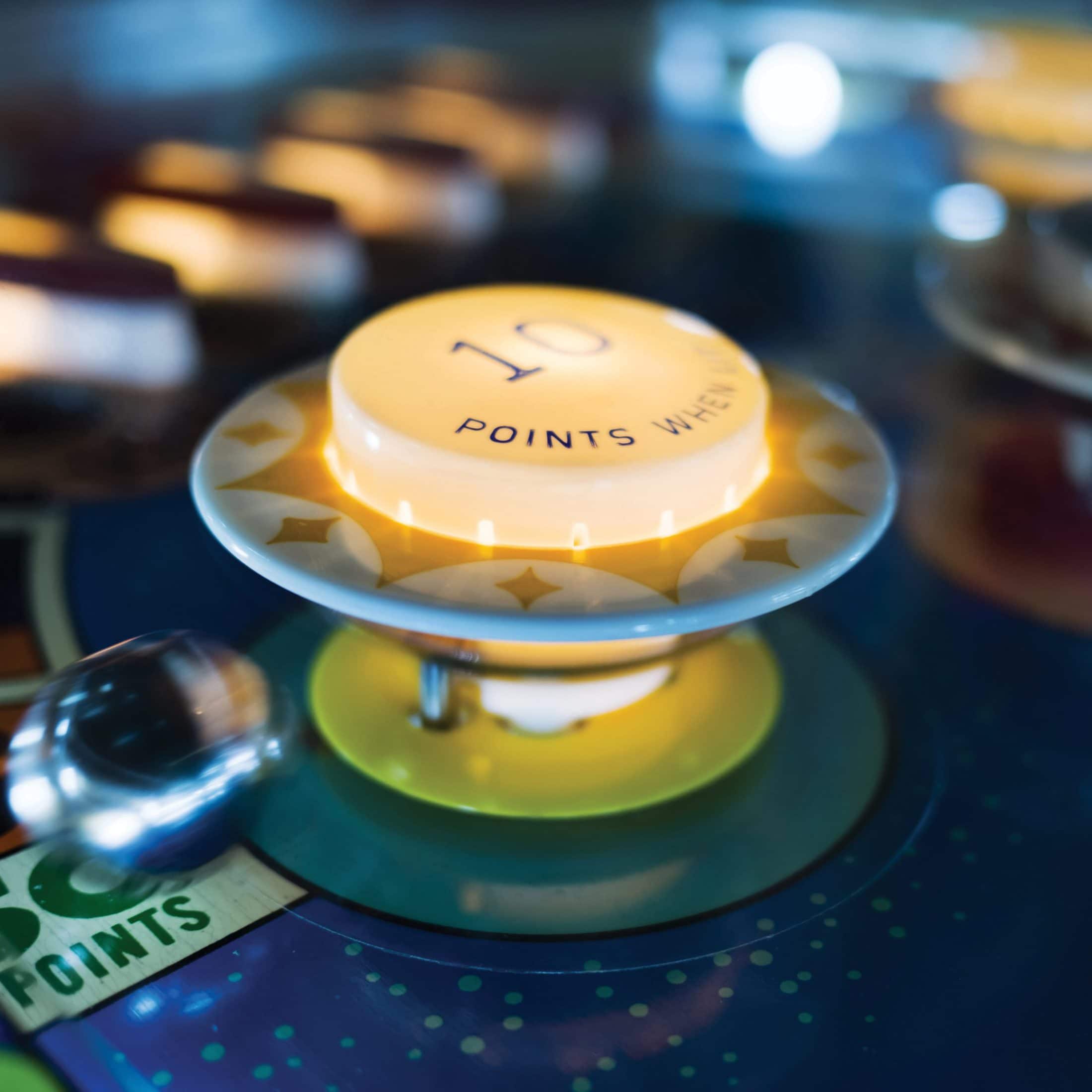 Deepening My Faith Through Mindfulness and Radical Acceptance

I’ve long believed that our life experiences can be like a cosmic pinball game. We often move from one event to the next in ways that can seem random, yet each one “bounces” us ever closer to God. My ending up at a Buddhist university studying psychology was no exception.

I spent my undergraduate years at Wheaton College, the self-proclaimed “Harvard of Christian schools,” where I studied political science, with the intention of going into government. However, by the time I graduated, the only thing I was sure of was that I did not want to work in politics. Bounce.

Not knowing what to do next, I signed up with a temp agency. They assigned me to work at an organization serving people who have intellectual disabilities, where I eventually moved from temp to full-time case manager. Bounce.

Through connections in that field, an opportunity arose to teach dance classes to kids with special needs. In researching how I would do that, I stumbled upon the profession of dance/movement therapy. Bounce. In applying to graduate school to become a dance/movement therapist, I discovered that only six or seven such programs were offered in the country. One of them, at Naropa University, was right in my backyard. Bounce.

As I engaged my graduate school journey over the next three years, I began to realize that the healing work of therapy—the redemption of relationships through relationship—was in many ways a reflection of God’s desire to redeem humanity. Even more surprising was the fact that completing my education at a Buddhist university would deepen, expand, and cause my Christian faith to thrive.

A small, eccentric school in Boulder, Colorado, Naropa describes itself as “rooted in contemplative education” and “the birthplace of the modern mindfulness movement.” The university offers programs in yoga studies, traditional Eastern arts, and Buddhist psychology—a far-cry from the largely conservative, explicitly Christian culture at Wheaton College.

After attending an in-person admissions weekend, which included group workshops, course previews, and one-on-one interviews, I believed the program would be a good fit. Still, I was apprehensive. Would being in class in this environment be akin to stepping into spiritual battle? I imagined my faith being challenged outright and considered how I would respond with the academic apologetics I had absorbed as an undergrad. Friends and family, too, wondered what I was getting myself into.

One of my first semester courses was a practical introduction to mindfulness meditation. Our textbook, The Posture of Meditation, proposed that a more accurate translation of Jesus’s beatitude “Blessed are the meek, for they shall inherit the earth” would read “Fortunate are they who have softened the rigidity within, for they can gain access to the universal healing power of Nature.”

What? Those were certainly not words I had ever heard anyone ascribe to Jesus. When I brought my concerns to my senior pastor at Centennial Covenant Church in Littleton, Colorado, who is also a trusted family friend, he responded, “You know, meditation is actually a very ancient Christian practice.”

For the first time in my faith journey, I learned that included among the many ways Christians have put theology into practice over the centuries, mindfulness, meditation, and contemplative traditions have been valued approaches to God. This idea of “softening the rigidity” was the beginning of a change in my own faith journey. Whereas the explicit challenges to my faith I feared never did materialize, I did find myself in many a conversation or classroom discussion with colleagues who had very different worldviews from my own. By approaching these interactions with softness, I was met with softness, and discovered that we shared many values in common.

Around that time my church family began to use the metaphor of fences and wells in our conversations. An argument against legalism, “fences and wells” posits that there are two approaches to drawing people toward faith. Focusing on fences indicates that one’s beliefs and behaviors place them either “in” or “out” of the fold, us versus them. Building wells, on the other hand, offers a life-giving spirituality that draws people ever closer to the truth. Though some of us may be nearer or farther away from God, what counts is moving in the right direction. Rather than the spiritual battles I may have anticipated with my classmates, I found that though we came from very different traditions, in many ways we were all moving in the same direction—toward God. The invitation to soften helped to open my eyes to the imago Dei reflected in my classmates and teachers.

According to Jon Kabat-Zinn, professor emeritus of medicine at the University of Massachusetts Medical School and founder of a clinical program on mindfulness-based stress reduction, being mindful means “paying attention on purpose, in the present moment, and non-judgmentally.” A major benefit of being present in the moment is that much of our human worry is focused on the past or the future. By remaining in the present moment, we often reduce unnecessary anxiety. As Jesus tells us, “So don’t worry about tomorrow, for tomorrow will bring its own worries. Today’s trouble is enough for today” (Matthew 6:34, NLT).

We often move from one event to the next in ways that can seem random, yet each one “bounces” us ever closer to God.

The years after grad school came with their fair share of worry in my life. We are all created by God with unique emotional makeups, and my husband is one of those people whose emotional makeup tends toward depression and anxiety. When dealing with any kind of mental health challenges, the ups and downs can be unpredictable from day to day and week to week. In some ways, being a therapist by profession can make it especially challenging to support a spouse with mental illness. As much as I might want to, I just can’t fix my spouse. I believe intentionally trying to live in the present saved our marriage. Mindful awareness invited me to stay present in the midst of arguments. It means validating each other’s feelings. It means fully embracing the days or moments when everything is going well, even when yesterday seemed nearly impossible. Without present-moment living, it would have been easy to let the painful experience of the previous week spill over into an otherwise pleasant moment together, creating resentment and preventing us from appreciating the good days that do come. That’s not to say that we never discuss how the difficult days affected us, but there’s a time and place to have those conversations in a fruitful way.

Developing awareness and living in the present doesn’t just reduce worry. These practices have the potential to open our eyes to the beauty of life in each passing moment. Author and Franciscan priest Richard Rohr explains, “We cannot attain the presence of God because we’re already in the presence of God. What’s absent is awareness.” How much do we miss when we move through life at a million miles an hour, always reaching for the next best thing? Perhaps the psalmist’s invitation to lie down in green pastures beside quiet waters does not require us to go anywhere, but rather to open our awareness to the presence of the Good Shepherd who is with us in each moment. At least, that’s what I found to be true when I began my own journey through the valley of the shadow of death.

Long before I received the official cancer diagnosis, my mantra was, “I’m going to worry about one thing at a time.” From the day I first felt a lump in July 2019, to scheduling an appointment with my doctor, to being referred for a biopsy, I told myself, “One thing at a time.” I knew it would not do me any good to worry about what might happen ten steps ahead when I did not yet know what the next step would be. Finding out that I had breast cancer at 31 years old probably should have been shocking news. Yet somehow from day one I was filled with a peace that passes understanding.

The term “radical acceptance” was coined by Marsha Linehan, professor of psychology at the University of Washington and developer of Dialectical Behavior Therapy (DBT), a system she created to treat challenging mental illnesses by combining mindfulness teachings with Western psychology. Though popularized by DBT, the idea of radical acceptance has ancient roots in Buddhist philosophy. Linehan explains, “Radical acceptance means complete and total openness to the facts of reality, as they are, without throwing a tantrum.” In other words, it means looking at reality and recognizing that “it is what it is.”

Radical acceptance does not mean we have to like what’s happening or that we have no desire to change it. It does mean we stop wasting energy fighting against what is, and instead focus our efforts on those things that are actually within our control. When I radically accepted that I would be embarking on a journey of cancer treatment with all its unknowns, I surrendered my worries to God, and found peace.

Ultimately, I spent about six months in treatment, completing surgery, chemotherapy, and radiation therapy. At each stage, I reminded myself to take it one step at a time and allowed myself to accept whatever happened. About halfway through my treatment I remember thinking I was certainly walking through the valley of the shadow of death, yet because of the peace I felt as I surrendered control, I never saw the shadows. Though I had many prayer warriors interceding on my behalf, I never did manage to pray for my own healing. The only words I could pray were “Thank you.”

I write these thoughts near the end of 2020, a year that will certainly be remembered. The unforeseen challenges and societal upheavals of these last few months have brought grief and uncertainty to all of us in one way or another. In our smaller world, I am still in the early stages of remission, and my husband is newly in a healthier place. We do not know what the future holds, but we remember, “your heavenly Father already knows all your needs” (Matthew 6:32, NLT).

As we navigate questions that reach to the core of our society, may we move forward together by softening our rigidity, opening ourselves to the ways we are actually moving in the same direction. As we face the fear of an unpredictable future, may we live in the here and now, aware of God’s presence at each moment. And as we face our struggles one step at a time, may we come to accept what is, so that we may be filled with Christ’s peace.