Listening to the World

Lately my wife and I have found it helpful to relax in the evening away from the noise and chaos of the day by watching something light on television. We gravitate toward comedies that don’t ask too much of us and don’t mirror the grittiness of the world these days. 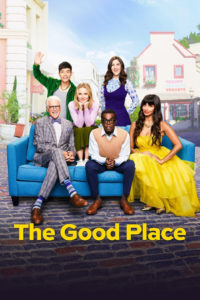 Recently we watched all four seasons of The Good Place, the NBC series starring Kristen Bell and Ted Danson. The comedy follows Eleanor Shellstrop (played by Bell) and her gang of friends as they navigate the Good Place, a heaven-like existence where good people go after they die. The problem is that Eleanor wasn’t a good person. She refers to herself as an “Arizona dirtbag.” She shouldn’t be in the Good Place.

It is an easily binge-able show, although Christians familiar with the images of hope in the Bible will likely be disappointed in this depiction of heaven. The “goodness” of the Good Place is purely external; the people there don’t exhibit any evidence that they have been sanctified. There is no God in the Good Place; it is more like an attempt to manufacture everyone’s own personal ideal of heaven. And getting into the Good Place requires earning enough good-works-points on earth—a simplistic form of works righteousness.

The Good Place is no compelling vision of heaven. But the show seems to know this—at least by the end of the series. (And that is about as much as I can say without spoilers.) The show seems to recognize that its search for hope has come up dry. And for this reason, I think every Christian should watch it.

In their remarkable book, Reframation, authors Alan Hirsch and Mark Nelson call the church to develop the art of listening to the world we live in. They note, “If Jesus’s followers are serious about entering into a culture with a story of good news that will change the world, we should probably seek to understand exactly what good news is to those we are in relationship with.” In other words, we must learn to be attuned to the longings of the world, so we can offer the good news of Jesus in a way that can actually be heard. The Good Place hands us cultural exegesis on a platter—50 episodes of our society telling us in great detail what it hopes for after death.

The world’s vision of the afterlife is weak and unsatisfying as compared to the vision we find in Scripture. But we would be foolish to dismiss The Good Place simply because it doesn’t offer a biblical hope. And we would be foolish not to recognize the longings and values in it. Some might even surprise us—such as the show’s willingness to recognize both morally right and morally wrong actions. (Maybe deep down our world is not as relativistic as we assume!)

The show eventually requires a savior character, which is found in a moral philosopher. Could this indicate that the world is searching for wisdom on living well or leading a life of meaning? Throughout The Good Place, Eleanor, and later other characters, demonstrates a dogged determination to become a better person. Might she be a paradigm for many of our unchurched and de-churched neighbors?

The Good Place offers us an opportunity to listen to what the world believes. I recommend the show, not so you can sit above it and correct it (as I did at first), but so you can sit under it and hear the longing for hope that fills our society. Perhaps this is a practice the church should engage in regularly.

The world offers us its theology in a variety of movies, television, and music. I suspect many of us are steeped in some of these offerings. What if our church small groups were centered around conversations with churched and unchurched people about shows like The Good Place? What if we used the culture’s own offering to allow our friends and neighbors to give voice to their own longings? We would be like Paul wandering through Athens listening to the philosophers. If we listen well enough, we may actually be invited to share a hope and a love that is far greater than anything the world knows. First, we must listen.