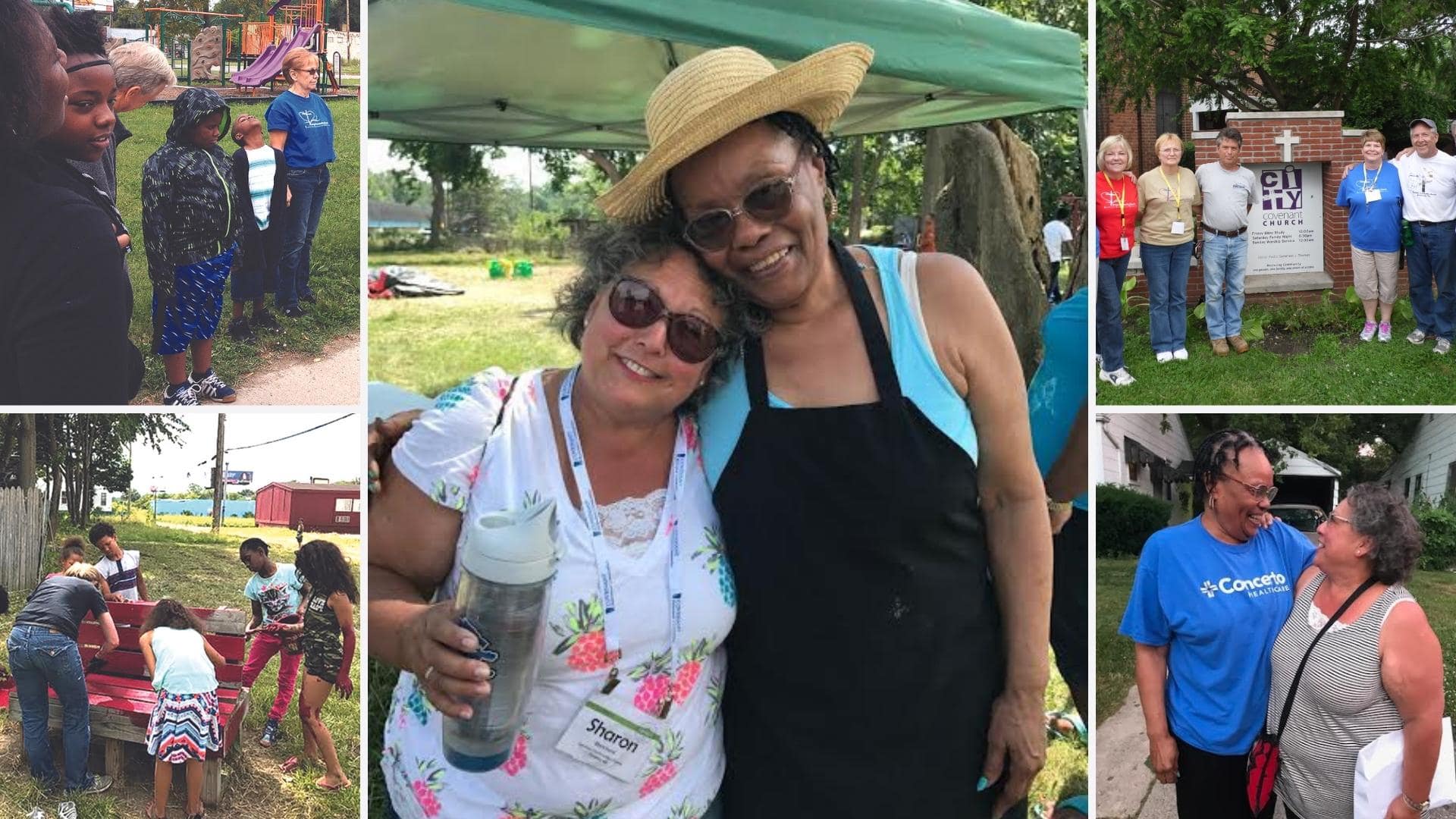 City Covenant Church is a primarily African American congregation in the Brightmoor neighborhood of Detroit.

The two congregations are finding ways to partner in ministry—and to build life-giving relationships with each other.

When pastor Becky Poor was called to serve Saranac Community Church ten years ago, she was drawn to the mission-minded generosity that is core to the congregation. Located in an area with mostly blue-collar workers, many of whom are unemployed or under-employed, the 145-year-old church has a long history of caring for the spiritual and physical needs in their community and around the world. Forty years ago, the church set a bold goal to raise their mission giving to 25 percent of their church budget. It now is about 23 percent. Their goal has been lived out through local missions, especially during Covid through programs like their food truck that served 80-90 families a month and their food pantry that served an additional 40-50 households (an increase from the 20 families per month they served ten years ago). The church supports four Covenant global personnel teams.

Great Lakes Conference superintendent Garth McGrath has called Saranac Community “a small but mighty church” because of their deep commitment to their community and care for people who are hurting.

When the Covenant Annual Meeting was held in Detroit in 2013, Saranac Community sent 10 members to participate in the urban mission experience that was offered the week beforehand. Poor says they were deeply moved by the difficult conditions they witnessed in Detroit. Since then, they have worked to develop relationships with people outside their community. One of those relationships has been with City Covenant.

Pastor Semmeal Thomas planted City Covenant in 2009 in an under-served, under-resourced area of Detroit. Ordained by the Covenant at last year’s Annual Meeting, Thomas has a heart for making sure people in his community experience the love of Jesus. City Covenant serves their neighborhood by providing after-school care, medical and dental clinics, a career/employment center, support for incarcerated persons returning home, community gardens, and the renovation of abandoned homes. They also feed people who are hungry through a program called Breaking Bread. Four days a week they serve food to 150 people each day—600 meals a week.

Connecting in both our differences and similarities—we are strengthening the trunk of our faith so we can bear more abundant fruit together.

After visiting City Covenant and seeing the way they were actively working to transform their community, members of Saranac Community decided they wanted to participate in the ministry there. “Pastor Semmeal is amazing,” says Poor. “His church in Detroit does incredible mission with hardly any resources. We wanted to partner with them to build relationships that would support their wonderful work and help us to learn from their Spirit-led ministry too.”

So members of Saranac Community started a churchwide yard sale to raise money for City Covenant. The first year they raised $500. They have now hosted the yard sale for eight years. Last year proceeds totaled $3,000, which was divided between three communities in need: City Covenant, an urban church in nearby Grand Rapids, and Covenant global personnel Jochy and Tammi (Biggs) Hernandez, serving in the Dominican Republic. Tammi grew up in the congregation.

Poor says the yard sale just keeps growing, “This church wants to help others. The heart of wanting to give is very strong here.”

City Covenant uses the donated funds to help keep the Breaking Bread kitchen stocked with food and hygiene kits for members of their community without homes.

Poor recognizes the challenges people face every day. “Think of a tree,” she says. “If you don’t have a healthy trunk, a healthy structure, you’re not going to have healthy growth reaching out. One of my favorite verses is John 15:5: ‘Jesus said I am the vine; you are the branches. If you remain in me and I in you, you will bear much fruit.’ And so clinging tighter to Jesus together is vital. By building a relationship with City Covenant Church—connecting in both our differences and similarities—we are strengthening the trunk of our faith so we can bear more abundant fruit together.”

Thomas sees the connection between the two churches as a symbol of unity.

He recalls two years ago after his brother died suddenly of a heart attack. “One day I got a letter from Pastor Becky’s church,” he says. “It was a card with a note. The note said, ‘We found out that you have lost your brother and we want you to know that we are praying for you.’ I sat down at the table and just bawled. These people recognized my pain. They all signed the note and wrote Scriptures and such. That speaks to the unity of Christ. It blows me away. That letter could’ve been one of the yard sale checks that they send, but nothing could have been more valuable to me than the effective, fervent prayers of the people of Christ.”

When Thomas was ordained, Saranac Community reached out to him to celebrate. When Poor was ill a year ago, Thomas sent a card and reassured her that his church was praying for her. And he offered words of wisdom and support that helped Poor persevere through a challenging time.

“The two churches have way more in common than not,” says Thomas. “Pastor Becky recognizes that. She has shown me her pastoral excellence. The job for us as the body of Christ is to be unified. We are coming together as one in Christ.”