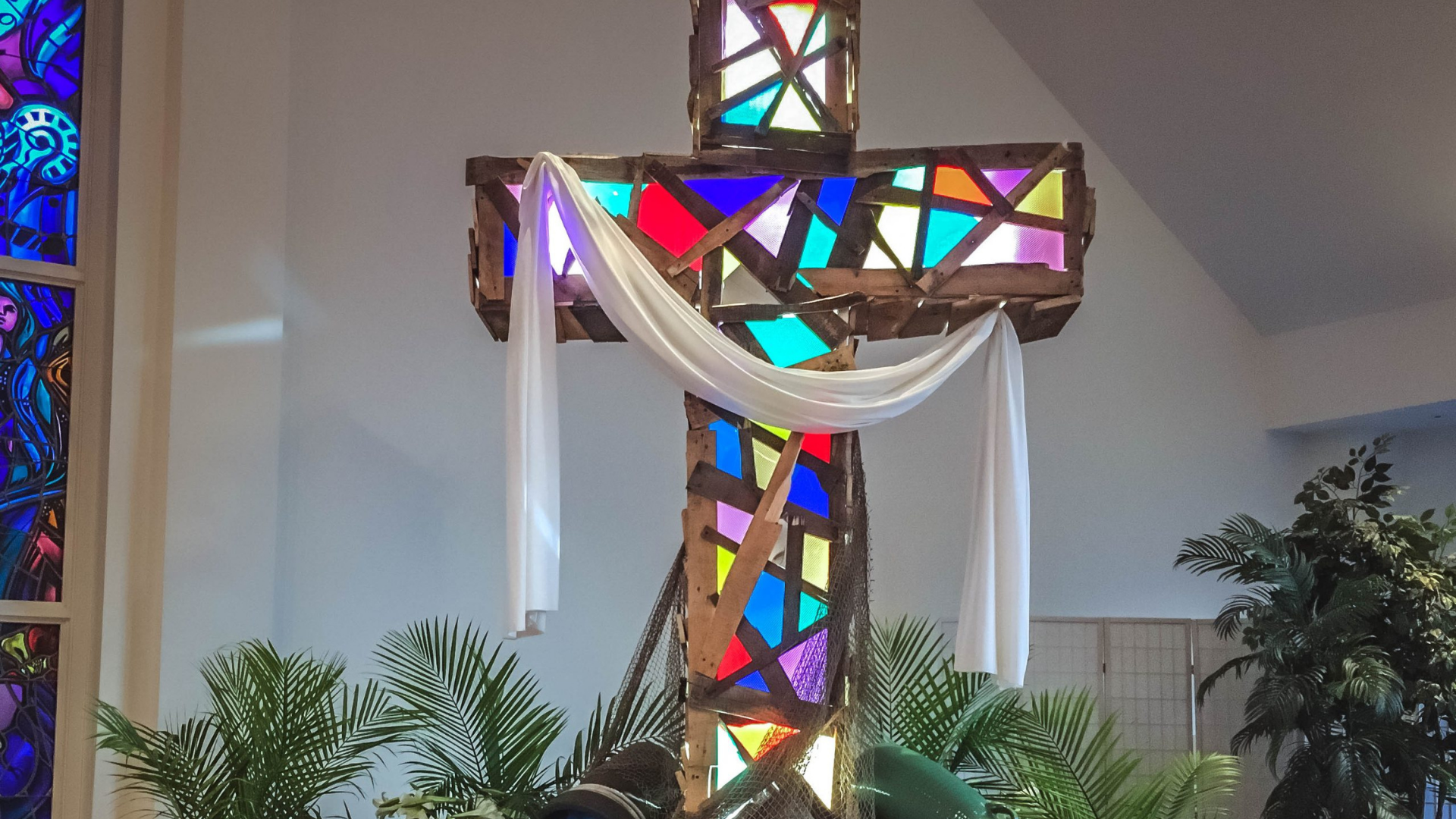 The Creativity and Innovation of Worship in Liminal Times

One of the subplots of Finding Nemo involves some fish in the tank of a dentist’s office who are trying to escape. The post-credits scene depicts the end of their long-awaited successful escape attempt and, as the last one plops into the freedom of the ocean, they all cheer. Then, an awkward pause. And one fish says, “Now what?”

If any phrase describes the place at which we currently find ourselves, it’s that question: Now what?

There’s been a pandemic—now what? Lots of people won’t come to worship in person—now what? I don’t have enough volunteers—now what?Our funding is drying up—now what?

Anthropologists, sociologists, and psychologists will tell you that innovation rarely arises during times of tranquility; rather, it’s in times of massive disruption that our best innovation occurs. Anthropologist Victor Turner called this “liminality,” the time when circumstances get really hard and we are forced to either adapt or give up. And while disruptions such as changes in pastoral leadership, the closing of a church, cultural difficulties, and transitions tend to be turning points, they’re generally not fun times. These are seasons that can refine us into better disciples of Jesus and better churches, because circumstances push us to re-focus on what it means to be God’s people in this world and what it takes to creatively adapt to a new environment. 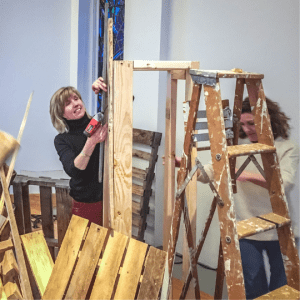 Creativity doesn’t tend to happen when we have unlimited resources. When people do have all the resources in the world, it’s remarkable how often they end up doing basically the same thing as everyone else. (If you need an example, last summer the three richest men in the world were competing in the exact same space race.)

But in liminal times, we are almost required to strip the extra away—the extra financial baggage, the traditions we’re holding onto because they’re comfortable, the new projects we started because someone had a pet idea, even though it didn’t really fit the ministry’s vision. Liminality forces us to focus on what matters most because when everything around us changes, why we do something doesn’t need to change, but how we go about it almost certainly does.

So how do we lean forward, rather than burying our collective heads in the sand? The world of creative design has three principles that can help us lean into these new realities.

Do you know why you do what you do? I mean, do you really know? So many of our leadership conferences, books, and articles focus on how to cast vision, but we often end up focusing on the mechanics—the how— rather than on the actual vision, or the why.

I’m a worship pastor, and for more than ten years I’ve tried to help our teams really focus on why we do what we do. Romans 12:1 says: “In view of God’s mercy, offer yourselves as a living sacrifice, holy and pleasing to God; this is true worship.” So what is worship? It’s an active response to God. Notice the plural “yourselves” (“all y’all” needs to become standard here!) into a singular (a living sacrifice)—true worship means we’re all responding to God’s mercy together.

Maybe it sounds too simple, but think about the potential applications. Singing together is responding to God’s mercy in corporate song. That means the primary purpose of the worship team, the choir, the organist, and the tech team is to lead our congregation in singing together, as a response to God’s mercy. At one point when our church’s attendance numbers required us to combine two worship services of disparate styles into one, it was the why of singing that kept us together, not the how. People felt deep loss knowing that their style of worship would be less frequent, but we spoke with them as groups and individuals, trying to help them but their fears into perspective. “How,” in this case was a musical style, how we sang and played a particular set of lyrics. By focusing on why we sing, we could ask questions about how the Bible says we ought to do that. Scripture focuses on our posture toward God, not the method or style of the music itself. 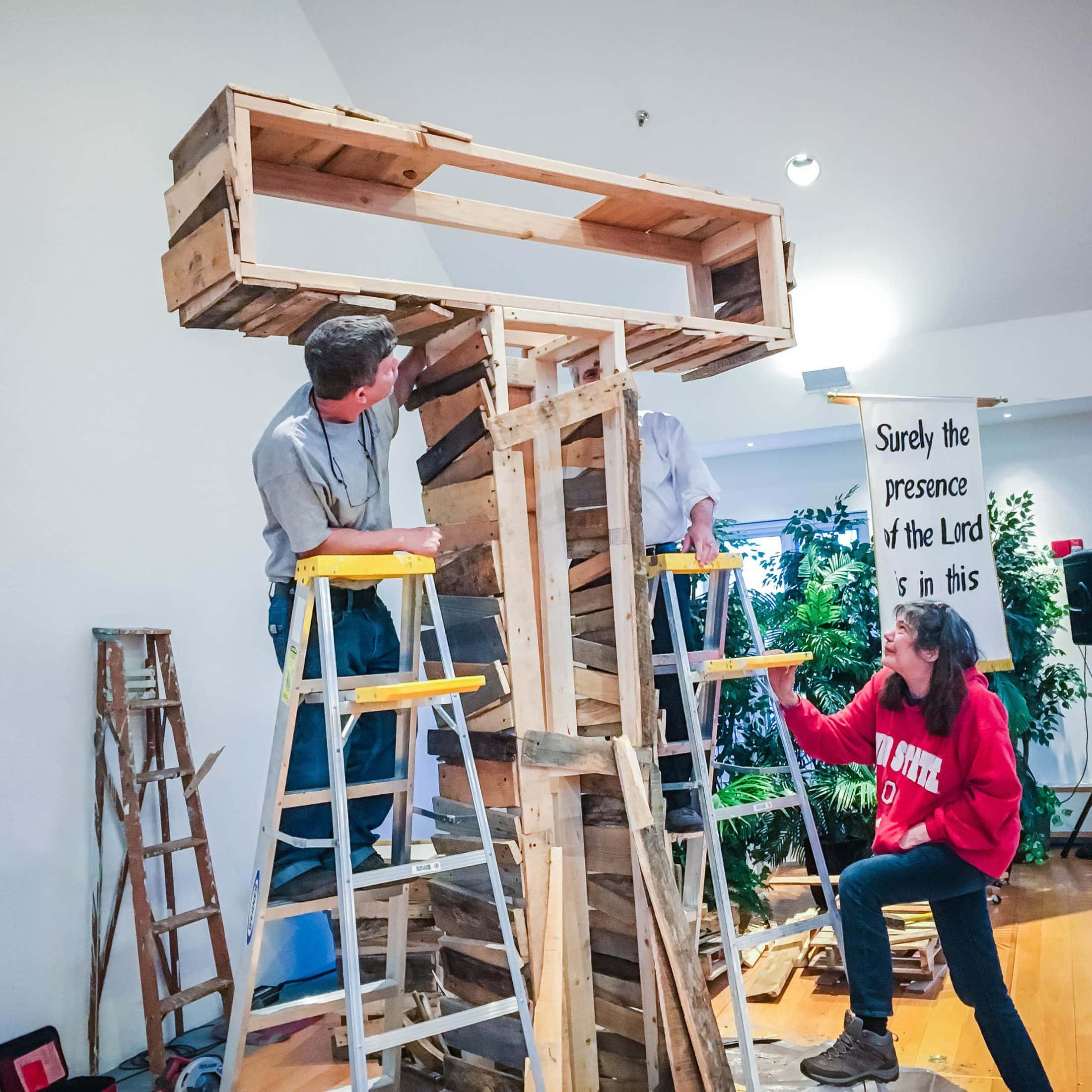 We worked to teach our congregation that we can love one another by singing one another’s songs, in their most authentic style. We didn’t tone down the drums or the organ. And to top it off, each musical culture has something to learn from and to teach the other. Our congregation has continued to sing strong because they caught the vision that the together was as important as the singing itself. We still wrestle with this as a congregation, but as author and pastor Andy Stanley says, this is a “tension to maintain, not a problem to solve.”

Romans 12:1 can also apply to our calling to be a witness in this world—in our daily lives, to our mission work, to our hospitality, to our generosity as a church toward our community, toward acts of justice. How we treat others is a way of responding to God’s mercy. These are all acts of true worship.

If we take the time to learn our why, we can apply that to our context: our neighborhood and the people in it, their customs, their motivations, their dreams and aspirations, their hangups, their hurts and pain and history. “Why” is about purpose, no matter what the circumstances.

One of my favorite books on creativity is Hatch, by C. McNair Wilson. Among several gems in this book (I recommend it for the margin doodles alone) is a brainstorming process called “yes, and.” When we collaborate, we have a tendency to focus on efficiency, which means arriving at the best idea as fast as possible. The problem is, in our gusto to be quick about it, we often end up shooting down good ideas. Not only can that cause hurt feelings, it can also lead us to discard ideas that could have turned into something genuinely helpful.

We also tend to have a scarcity mentality when it comes to resources. We think there’s never enough. I can’t tell you how many brainstorming sessions I’ve been in where my first thought is, “Oh, we couldn’t possibly pull that off! It’s so expensive / hard / big / small / complicated / impossible.”

This is where “yes, and” comes in. When we engage in collaborative creativity, the rule is that we don’t shoot down anybody’s idea, no matter how ridiculous it may sound. The guideline is that we say “yes, and…” and add to the idea. That pushes us to truly explore options to their fullest potential, rather than settling for a mediocre result.

Several years ago, my second Easter here at Bethany Covenant Church in Berlin, Connecticut, was fast approaching, and our lead pastor had an idea for exploring some visuals for a Lenten sermon series about how God never wastes anything. So we pulled together a team of creatives. Our first idea was to use a cross to represent the series theme. We talked about that for a little while and decided that using a cross to represent Easter was a little too obvious. 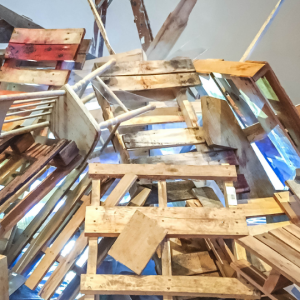 I had just read Hatch, and I realized we’d already entered a familiar pattern of shooting down an idea—so I stopped the conversation, explained the process of “yes, and,” and suggested we try it. We read the series description again, and someone said, “What if it wasn’t just a cross, but we built the cross over the six weeks of Lent?” Then someone else said, “Yes, and what if on the first week it was just a pile of rubble? I mean, that one is about Samson.” And then someone else said, “Yes, and if nothing is wasted, what if the whole thing was made out of garbage?”

The creative juices were flowing, and after several hours had flown by, we had an absolutely stunning idea that ended with a 13-foot cross built across the six weeks of Lent, Good Friday, and Easter. Each week something in the morphing pile related to the sermon that day until Easter came and the front of the finished cross fell away to reveal back-lit stained glass. The crazy part? It ended up costing us a grand total of $200. And it’s a project we still hear about here at Bethany.

By taking the time to explore “yes, and,” we can consider possibilities we would never have tried otherwise. “Yes, and” does require that we be willing to “fail forward,” as it were—we’ve had a couple of doozies, to be sure—but our motivation to continue trying outweighs the failures by a long shot, and the community that these projects has created is deep and strong.

Connecticut closed down for Covid on a Thursday night. That meant we had a very hard choice to make very quickly, because the headlights of the Sunday train were pretty bright. Obviously church wasn’t happening in person that weekend, but the question remained, what could church be if we couldn’t be in person?

It felt like there was nothing we could do, but we had to do something. Our desperation pushed us over the threshold from panic to creativity. We started asking, what is church (why), and what does it look like while everyone’s stuck at home (how)? And what do people really need in this moment? 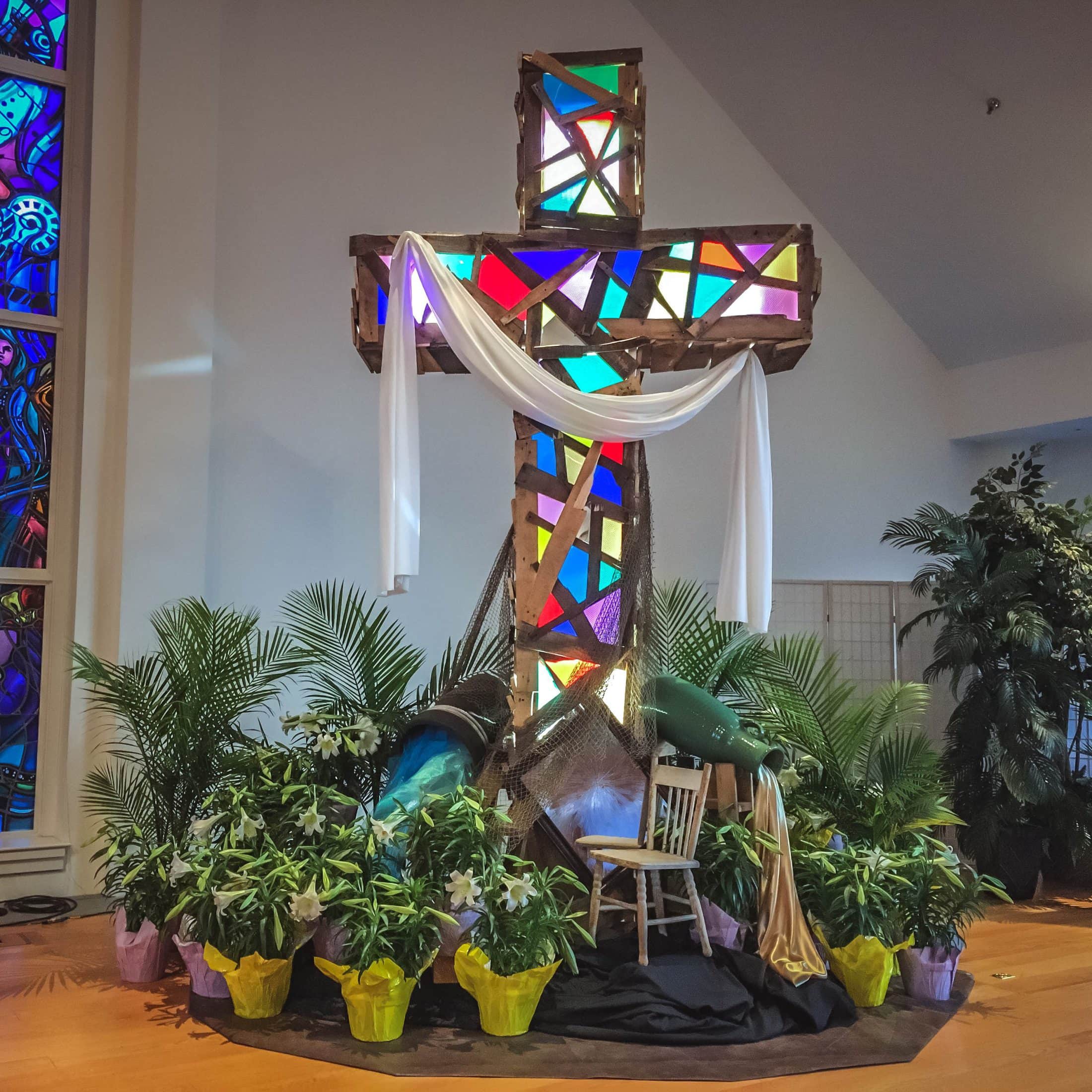 I pulled out an old video camera and set up a few stools on our stage, and we recorded a short prayer service to upload to YouTube for Sunday. But then Monday came, and we had to ask, “Well, now what?” Each day that week, we went through the steps that eventually constructed our online presence: devotions, family moments, and within two weeks, full worship services. It was a long process. Our whole service structure has changed, and we have a fantastic streaming service now as a result of what we learned when circumstances forced us to think beyond our habits.

Desperation can show us what we really value.

Ultimately, this is about perspective. It is our “why” that needs to succeed, not our “how.” If the “how” isn’t producing disciples who make disciples, if the “how” isn’t equipping and empowering people to love God and love one another, we can’t blame the culture or the circumstances or “those people who just don’t get it.” A particular “how” is just one of a myriad of ways to do things. Maybe it used to work, maybe it could still work again someday, but perhaps now is no longer the time for this particular method. When we’re desperate for a particular “how” to succeed, the “why” simply becomes “success.” And success is not the “why” to which we are commissioned. When we are desperate for the right “why” to succeed, the “how” becomes more natural and flexible. We’re okay releasing the “how” to experimentation.

You were not called to your church or your community because of your skills or your desires or your preferences. Those things may have gotten you there, whether it’s for your job at a church or elsewhere. But we are called to serve people; to equip and empower them to be like Jesus, to love God and love neighbors, to make disciples who make disciples. How we do that will change, and that’s okay; the God who sends us is our sturdy foundation, and is with us the whole way.