The Making of Biblical Womanhood: How the Subjugation of Women Became Gospel Truth

“The Bible says women aren’t supposed to preach. It’s right there in Paul.”

I distinctly remember my conversation with Jason. We were both in our 20s. I was the lead pastor of a church plant; he was close friend, an invested member, and a faithful volunteer. Jason had concerns about my position on women as preachers. Caren had recently joined our Sunday morning preaching rotation, and Jason was convinced this was wrong. I suggested that there are different ways to read Paul’s words on women and preaching, but he remained unmoved.

Sherri (not her real name) is a dynamic co-host for a Christian radio group in our area. On occasion, she is asked to preach at different churches, including her home church, where her husband is the pastor. When a friend mentioned this practice at a gathering of radio personalities, Sherri was instructed to refer to these opportunities as “speaking engagements,” not preaching. 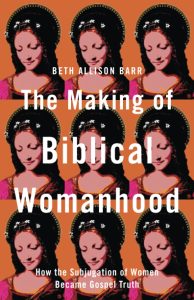 When I was a youth pastor, some students in our group attended a private school connected to a local Baptist church. Each year the students elected an upper-class student to serve as their chaplain. One year during my tenure, the students elected a female. One of the pastors confronted the school’s staff chaplain, demanding she be removed. The pastor said, “This issue (the doctrine that preaching and leadership is reserved for men) is a hill that I will die on!” The staff chaplain paused and replied, “Then you need to find a new hill.” The student chaplain remained and thrived in her new role.

Some of these experiences happened decades ago. While I don’t know that it would have changed any of those complementarians’ minds, I wish I’d had Beth Allison Barr’s book The Making of Biblical Womanhood as a resource. It would have helped me clarify my own understanding of Scripture and encourage others to rethink their ideas on biblical interpretation, women, ministry, and patriarchy.

Barr writes as a woman who has been personally affected by patriarchy in church systems. Her account of her husband’s firing from his church due to his views on women in ministry is heartbreaking but not uncommon. Barr’s personal narrative, along with her expertise as a historian, provides a compelling framework for her argument: the evangelical church’s commitment to patriarchy hurts women, dilutes the gospel, and robs the church of key voices.

She writes, “As Christians we are called to be different from the world. Yet in our treatment of women, we often look just like everyone else. Ironically, complementarian theology claims it is defending a plain and natural interpretation of the Bible while really defending an interpretation that has been corrupted by our sinful human drive to dominate others and build hierarchies of power and oppression.”

Barr walks the reader through Scripture and history to support her claim. The marginalization of women isn’t hardwired into God’s design for humanity. Rather, this is a result of the fall.

When readers come to Ephesians 5 and Colossians 3 with a clearer understanding of Roman cultural roles for family members, they read Paul’s epistles differently. In Romans 16, Paul unapologetically names women who serve both Christ and the church faithfully: Phoebe (a deacon), Priscilla (a mentor to Apollos), Junia (an apostle).

Barr goes on to identify key female voices in medieval church history. She introduces names that may be new to readers: Margaret Kempe of York, St. Margaret of Antioch, Bishop Genovefa of Paris, and Bishop Brigit of Kildare. These women boldly embraced their calling and gifts, which were often affirmed by their communities if not by the religious establishment.

The Protestant Reformation, the Enlightenment, the Industrial Revolution, and the rise of American evangelicalism all influenced the evolution of modern patriarchy. While these movements sometimes advanced the role of women, they also contain key threads that warp a reading of Scripture that affirms women as equal partners with men in ministry leadership roles.

Two issues spring from Barr’s work. The first is a call to an honest reading of Paul’s letters against the biblical record of his ministry. In Acts 21:8-11: “Leaving the next day, we reached Caesarea and stayed at the house of Philip the evangelist, one of the Seven. He had four unmarried daughters who prophesied. After we had been there a number of days, a prophet named Agabus came down from Judea.” Luke’s traveling party, including Paul, meet Philip’s prophet daughters.

Per his own writing, Paul identifies prophecy as a gift to be regularly exercised in local church worship for teaching, exhortation, and rebuke. He does this is in
1 Corinthians 14, one of the same passages used to silence women at church. “Two or three prophets should speak, and the others should weigh carefully what is said. For you can all prophesy in turn so that everyone may be instructed and encouraged” (vv. 29, 31).

If Paul affirms prophecy, a speaking gift, but believes it is reserved for men, why is he silent in Caesarea? Luke’s implication in Acts 21 is that it is right, normal, and expected for women, including these specific four women, to speak to congregations in worship.

The second issue is the question of technology. These days, more Christ-followers are consuming biblical teaching through digital avenues than ever before. Podcasts, YouTube, TikTok, and Twitter have democratized how content is created and delivered. And yes, patriarchy has found a digital presence and continues to garner support in some circles. At the same time, women who have been barred from pulpits, classrooms, and ordination processes are lifting up their voices online. This is a unique moment for the church to support, encourage, and affirm their gifts and honor their stories.

It can be tempting to believe that because we live in a theological and doctrinal space that affirms women as leaders and pastors, patriarchy no longer rears its ugly head in our congregations or there’s no work left to be done on this front. But The Making of Biblical Womanhood calls us beyond understanding to vigilance. Her book is a must-read for clergy and lay leaders alike.