The Ministry of Tight Lines and Fresh Cuts 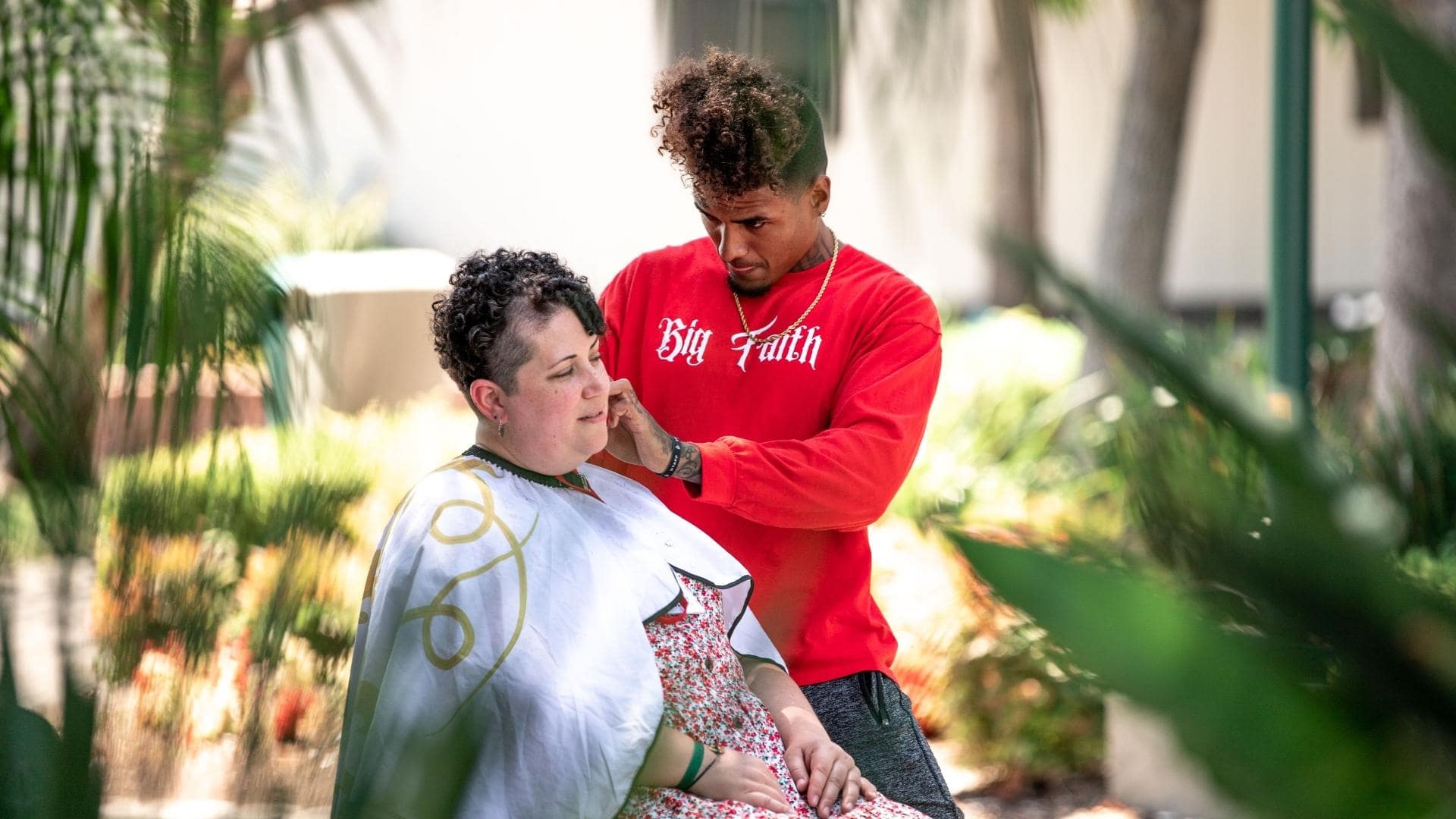 Michael “Big Faith” Brown arrived on the campus of Biola University last summer sporting a bright red sweatshirt with a frizzy mini-mop of hair sitting atop a fresh fade, a fully tatted-up left-arm sleeve, and a full-length neck tattoo with the letters YHWH.

Brown was attending Unite West, the Covenant youth gathering of the Pacific Southwest, Pacific Northwest, and Alaska conferences. As a youth leader in my mid-forties, I arrived at Unite, secretly hoping to connect with some younger adults whose cool factor might rub off on me a little bit. This guy fit the bill—and then some.

Brown has an ongoing relationship with one of the ministry leaders at Eagle Rock Covenant Church in Los Angeles, mostly because of his background in outreach ministry through hip-hop. “Big Faith” is the nickname he uses onstage. When I met Brown after a youth leader meeting and we quickly bonded over a shared love of Christ and hip-hop, I expected him to tell me about his heroic exploits with bombastic beats and witty lyricism.

But like Moses before the exodus, God did the unexpected—by first changing what was in his hand. Instead of a microphone, Brown was holding barber clippers.

“It started just a few months ago,” said Brown, as we sat down for a Zoom conversation several weeks later. “My own barber is a beast—like he’s really good, and I’d been seeing him for a long time. But he was so good that he was really busy, and not that available.” So Brown decided to take a chance on a different barber.

But he wasn’t impressed. “I mean, the dude couldn’t even do a proper lineup.” When the man said he’d been cutting hair for years, Brown had a realization. “It made something click in my brain,” he said. “I don’t know…maybe it was a spiritual awakening.”

His siblings all had demonstrated artistic talent with drawing and making tattoos, but he’d never been able to replicate their artistic success. That day, however, Brown began to wonder if perhaps he too was called to make art—with hair.

“I’d been struggling for employment and trying to hear from God about what to do next. I felt like, ‘If this guy is out here doing it, maybe I should be out here doing it.’ And then I realized, when you’re giving someone a cut, you get to talk to them, you have them in your chair right there, for maybe an hour. It was like the Lord took a veil off my understanding, and I started to see it so clearly.”

So after obtaining a pair of decent clippers and a few other barbering tools, Brown set out to find people on whom he could practice by giving them free haircuts, including people living without homes or in other vulnerable situations. Sure enough, it led to many different opportunities to speak to people and share words of peace, encouragement, and at times, share the gospel of Jesus.

“I mean, cutting hair is a ministry, first and foremost,” he says. “So when they invited me to come [to Unite West], I figured I might as well just bring my clippers too, ’cause, hey, you never know.” So after making a few friends shortly after arriving on campus that first afternoon, he was soon outside, cutting hair and talking about Jesus.

“It was amazing. It started with just one, but after a short while, there were a bunch of guys who showed up, and we just started to chop it up around the Scriptures and stuff, guys started sharing parts of their life with me and with each other. We kept it up so long, I didn’t even make the evening session, but it was all good. I guess we had our own Bible study that night.”

The longer I hung out with Brown at Unite, the more I felt my own likeminded willingness to follow the Lord’s leading, wherever it might take me. He just seemed to have a grounded sense of optimism and joyful excitement. Coming out of this season of pandemic and church drama, it was a welcome contrast to the tired cynicism I’d seen more recently.

Which reminded me to ask about the name. “When I was trying to think of a name, I remembered what Jesus said about how you only need a mustard seed of faith. And I started wondering, ‘If God can do all of this with a little faith, what could happen with big faith?’”

Recently, Brown has been teaming up with local outreach groups, cutting hair at community events. He still keeps up in the rap game, but now he’s finding just as much joy from cutting hair because he sees how directly it can benefit others.

The name of his barbering ministry is Faithful Fades. One gentleman in his chair hadn’t had a haircut in four years and was apologizing for an infirmity that caused mild convulsions. Brown says being able to cut his hair was a blessing. “Almost immediately, he started opening up to me. I could see there was a vibrant, happy person in there, but at that moment he was in a storm. He needed someone to talk to but had no one he could trust. Of all the people he could’ve called for a haircut, God allowed him to come to me.”

So if you’re at an outdoor Christian event in north LA between Glendale and Pasadena, you might just run into Mr. Big Faith. And if you’re not close enough to read the tattoos, just look for the guy with a microphone in one hand and barber clippers in the other.