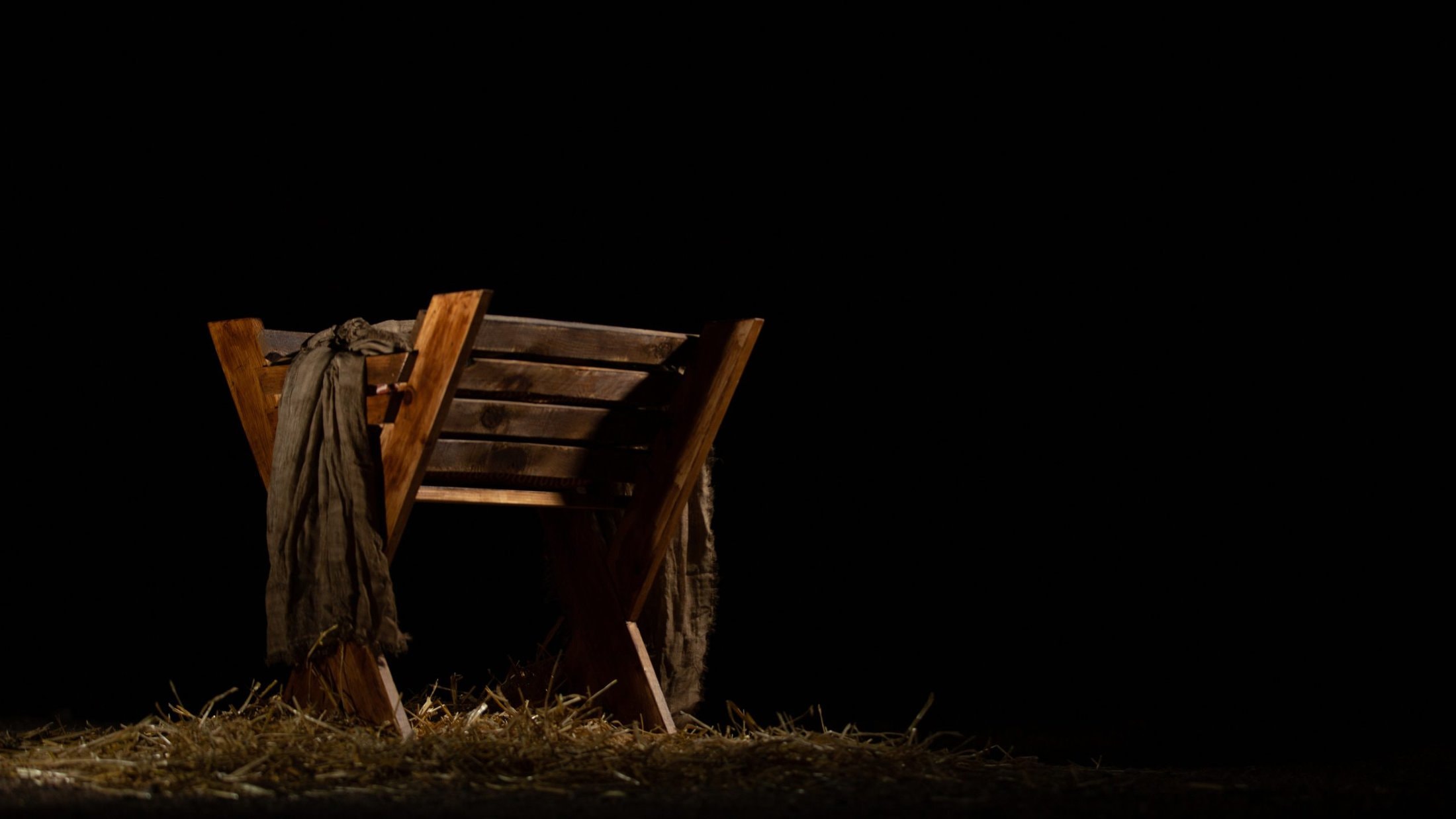 Juana and Fil Nesta inspire their Covenant community to reach their neighbors through a Christmas nativity festival.

If during the Christmas season you find yourself binging holiday movies on Lifetime or the Hallmark Channel, you’re familiar with meet-cute scenarios involving hotels, inns, or bed-and-breakfasts. Not only are they often beautiful locations to feature attractive people in cozy situations, but they’re part of the original nativity story. After all, the Scriptures tell us that Jesus was born in a manger in Bethlehem because there was no room in the inn. 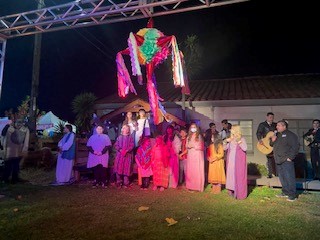 This treasured image of young Mary and Joseph sojourning their way through Bethlehem seeking shelter for the night, is at the heart of the Mexican traditional festival known as “Las Posadas.” Translated literally as “The Inns,” Las Posadas is a cultural re-enactment of this nativity journey in the form of a lively festival full of traditional Mexican food and music.

So when Fil and Juana Nesta were called into co-pastoring roles at Stockton (California) Covenant Church and the primarily white congregation wanted to connect with their brown, Spanish-speaking neighbors, staging a Las Posadas festival seemed the most natural way to proceed.

But it wasn’t simple, said Juana. Not only did it require a lot of event planning and preparations, but huge ministry transitions were happening along the way.

Journeying through Transition and Tradition 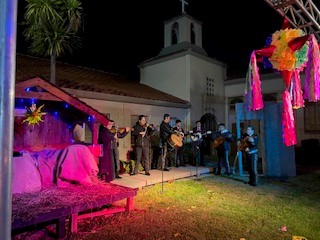 But last year, as Stockton Covenant was coming out of the pandemic, they really wanted to find an authentic way to connect with their community. A Las Posadas festival seemed like a no-brainer.

Las Posadas is a traditional Mexican holiday, stemming from a Catholic tradition that goes back to the 1500s. The word “posada” literally means “place,” like a hotel or an inn. In this context it means the journey. “In essence, it’s a nine-day procession, re-enacting Mary and Joseph as they knocked on doors,” Juana said. “And on the ninth day, once someone finally opens their doors, there’s a party. And Mexicans, we always party!”

In December 2021, their festival featured Mary and Joseph dressed in period garb, traditional Mexican food, and a mariachi band on a stage with a lighting trellis.

“It was kind of funny, because when I was talking to one of the gals on the planning team and she suggested that we make pozole [a traditional Mexican soup or stew], because that’s what people would usually have,” Juana said. “I said, ‘Well, how are we gonna do that? We don’t have enough tables and chairs.’ And she said, ‘Oh my gosh, in Mexico, when we would go to the posadas, we would have to take our own bowl and spoon and they would just give us the pozole. We’d sit on the curb and eat it, and they would give us plastic bags to bring our bowls and spoons home.’ I was like, ‘You’re lying,’ and she said, ‘No, that’s how it is there. Like, you know, just make it work.’”

Yearning for Meaning and Connection

Thankfully, they found enough bowls and spoons to go around. And there was, in fact, pozole, as well as other traditional foods like tamales and even the traditional seven-pointed piñata, which in Catholic teaching symbolizes the seven sins of the world from which Jesus came to free humanity. 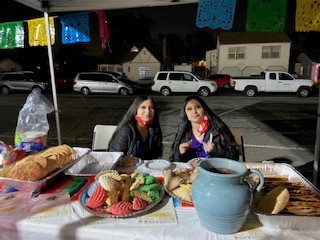 I told Juana that, like many Americans, I had a passing familiarity with the piñata as a tradition associated with birthday parties but had no idea there was any broader symbolism.

“Well, yeah,” she said. “When you get rid of the sins, you beat it down, and then there’s goodness and joy that comes out afterward.”

After a laugh, she turned serious.

“The Latino Protestant community often tries to stay away from anything that’s Catholic, but our thought is, let’s not throw out the baby with the bathwater. There’s so much beauty in the tradition, and yeah, the Catholic Church did a lot of bad things, but it’s part of the culture and tradition of our people. If we can find a way to keep the good stuff, it can be a beautiful way to reach people—not just people from Mexico but many different Latin American countries.”

Their belief in that cultural redemption was validated by the turnout.

“The community responded really well,” Juana said. “We’ve been getting calls from people saying, ‘Are you guys doing it again this year?’ People came from as far away as San Jose, which is an hour drive, just to come to our posada because there just aren’t too many in existence right now, especially coming out of Covid.”

Juana told me that she and Fil had some doubts as to whether or not they would be able to pull it off again this year, but it came together. The preparations have had a unifying effect on the congregation. 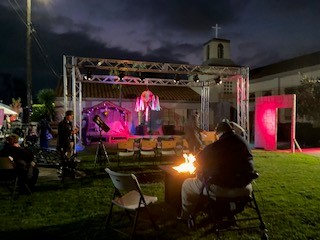 “For Fil and I, being able to put our best foot forward and do something to share Jesus with our community in a really grandiose way is really important to us. We don’t do things halfway. In everything we do, as much as we can, we want to do with excellence. The posada is a good way to share some of the beauty of our culture and our tradition.”

Posadas can also be done on a smaller scale. Joel Sommer of Access Covenant Church in Portland, Oregon, told me of a few times that Mexican immigrant families got together to have a posada in his community.

They created their own script. “After a while we kicked half of the group out of the house. They sang to us and requested permission to enter, and we sang in response by threatening to beat them with a stick if they didn’t leave. However, when we realized they were the Holy Family, we changed our tune and happily welcomed the Santos Peregrinos [Pilgrim saints]. At that point we spilled through the home into the backyard, lighting sparklers and shooting off poppers around a roaring firepit; pouring cups of ponche and feasting on tamales.”

“It was not a Posada for purists,” he adds. “My Mexican neighbor invited me to his house to celebrate Las Posadas a few days later, I think, just to show me how it’s done. But it filled our whole community with life.”

That seems to be the most important part—assembling people from the community to celebrate the nativity of Jesus.

“Finances are always an issue, and money is tight for everybody,” says Juana. “But our Latino families were like, ‘No, no, we can’t cancel it. It’s our one big event that we love, and it’s meaningful.’ We had very generous donations from our Latino families to help make this happen.”