My story is not uncommon; these “things” have happened before. I am twenty-eight years old, but remembering these “things”, I am nine years old all over again. For so many years I have blocked my memories, not allowing myself to relive the pain and the grief, just because others couldn’t deal with the truth. “Get over it,” they say, but it is not that simple. I was raped and molested by my brother. There… I said it. Why it happened, I don’t know. I don’t know if I’ll ever really know why or understand it. I was just nine when “it” happened, innocent and naïve.

He was sixteen and he terrified me; he still does to a certain extent. The first time I begged and pleaded for him to stop and was threatened that he would kill me if I ever told anyone. I didn’t, and it continued on for a year or two. I blocked so much out, that that time is now a blur.

I finally told a friend when I was fourteen. She told her mother, who told my mother, and then I finally shared what had happened. I owe my friend a lot. Who knows if I would have told otherwise. A weight was lifted, but new burdens began; stress on my family, an examination at the hospital, interviews by the police more than once, questioned by psychologists… all the while still having to deal with school. I struggled to focus, but felt out of place. I’ll never forget sitting in the court room and listening to my statement being read aloud. I still hate going anywhere near a court house. My abuser was ordered to attend counseling, but that was about it. I still see him about once a year at a family function, but I am always uncomfortable. He is still my brother, but I don’t acknowledge him as such. 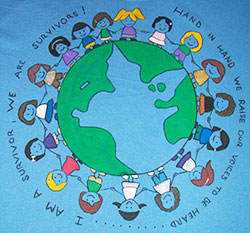 I’ll never get over “it.” “It” changed every relationship I ever had after that point. Instead of being carefree and able to enjoy life, I became cautious and shy. I kept my feelings bottled up and took a while to warm up to people. Trusting anyone was hard. I met my husband and he was super supportive and understanding about all I had been through. He was the one who encouraged me to seek counseling again.

This time it was more helpful. I still have my issues and memories, some of which came hurdling back when I gave birth to my son and suffered from postpartum depression, but thankfully I have found some new outlets to express myself. I am now making something good out of something bad. I painted a shirt that was on display at Triennial XIII and have decided to start painting the design I used onto canvas. This is my way of spreading the word that this violence does exist and we will not go unheard any longer.

Thank you to Yvonne DeVaughn, AVA, Marcia Friedman, and Women Ministries for giving me the opportunity to share a bit of my story. You have been a blessing to me and I thank the Lord for you.

Disclaimer: This translation may not be completely accurate as it is automatically generated by a computer.

Advocacy for Victims of Abuse