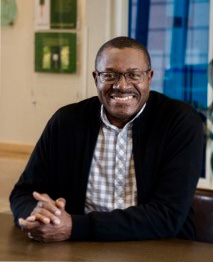 “I’m of the strong opinion that the work of Love Mercy and Do Justice is universal work,” says Robinson. “I really believe there are injustices we are called to address in every community.”

This is the philosophy he carries with him as the Evangelical Covenant Church’s nominee for the Executive Minister of Love Mercy and Do Justice (LMDJ). Robinson will sit for election June 27-29 at Gather 2019, during the denomination’s Annual Meeting, which is comprised of delegates from Covenant churches across North America and represents the highest governing body of the Evangelical Covenant Church, or ECC.

“We could work with every hamlet, township, and city across the country to do justice,” Robinson says. “When we’re in partnership with faith-based and non-faith-based people, we’re in proximity to represent the gospel of Jesus Christ.”

Raised in Chicago, Robinson now lives in Minnesota with his wife, Kim. They have seven children, the youngest of whom is a high school junior at Minnehaha Academy, a private Christian school that’s a ministry of ECC’s Northwest Conference. Robinson earned a bachelor’s degree in finance from Eastern Illinois University and a Master of Divinity from McCormick Theological Seminary in Chicago.

A church planter, Robinson serves as the lead pastor of Grace Outreach Covenant Church in Coon Rapids, Minnesota. Grace Outreach emphasizes its desire to be a multi-generational, multiethnic, Spirit-filled congregation that is “reaching up to God, reaching into the body, and reaching out to our community and world.”

Robinson, a bi-vocational pastor, also works as a senior community leadership consultant with the Amherst H. Wilder Foundation of St. Paul, Minn., where he creates, designs, convenes, and facilitates workshops for nonprofit, for-profit, and government organizations. He also serves as a leadership consultant and is the former director of Wilder’s James P. Shannon Leadership Institute.

“Paul is a gifted leader and organizational builder,” says ECC President John Wenrich. “His pastor’s heart shines through everything he says and does. His commitment to the proclamation and demonstration of the whole gospel is exceptional.”

Angela Yee, the executive director of ministry development at the ECC, says Robinson “brings the strengths of a deeply grounded relationship with God, wisdom from vast experiences, and a heart for bringing God’s love where there is an intersection of differences.”

Robinson says he is in awe of the enormity of the role as well as the work of the executive ministers of LMDJ he’d be succeeding, Cecilia Williams and Debbie Blue. He also sees how his life has aligned to take on the position, from his work in anti-racism to intercultural development to nonprofit work to pastoring.

“I believe God has been orchestrating the last few years of my life to prepare me for this moment,” he says. “All the things I had been doing in various venues, God is bringing together in one venue in working for the Covenant.”