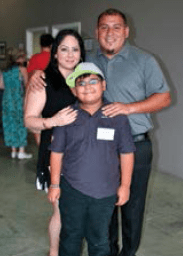 For the past four years, a small Covenant church plant just outside of Nashville has been trying to live out the words of Jesus found in Matthew 25:36: “I was a stranger and you welcomed me.”

Sometimes that’s done by greeting newcomers with a smile and a fresh cup of coffee in the church lobby or sending out flyers advertising a new sermon series. And in the case of Ricardo and Heren Morales, it meant helping reunite a young couple separated by immigration status through persistence, love, advocacy, and the power of prayer.

Eddie Poole and a few of his close friends weren’t thinking about immigration reform when they started MJ Life Church in Mt. Juliet, Tennessee. They were just trying to introduce new people to Jesus.

Among the first people to visit the Covenant church plant was Heren. A single mom, she and her son, Ozman, had moved to Mt. Juliet on a temporary basis to take care of her ailing father, who was struggling with complications from diabetes. One day a flyer from MJ Life Church appeared in her mailbox, advertising a sermon series called “The Vow,” about marriage. She decided to give the church, which was then meeting in a local school, a try.

“I wanted to get married sometime in the future so I went,” she said. “I ended up getting hooked on the series.”

The day she visited was only the second weekend that the congregation had held Sunday services. Heren liked the church because it was small and because the sermons seemed to relate to everyday life. Before long she became a regular on Sundays and eventually was one of the first people in the church to be baptized.

The church plant is a bit of an experiment. Their programs are modeled after LifeChurch in Edmond, Oklahoma, a Covenant congregation and one of the largest churches in the United States.

On Sundays, the Mt. Juliet congregation shows videos of the sermons from Oklahoma rather than an original sermon by Poole. The rest of the ministries are run by local church members. So far it seems to work. The church began with a handful of people in 2009 and now has around 160 folks in the congregation.

A few months after she joined the church, Heren met Ricardo on a blind date with a friend. The two hit it off right away. He was kind, could always make her smile, and had a very strong faith, all qualities she was looking for. Ricardo also got along well with Ozman, who is eight. Heren says that Ricardo quickly became the father figure that Ozman was missing.

Poole took more convincing. Knowing that Heren’s faith was relatively new, he felt protective when she first mentioned that she had met someone. He wanted to know that Ricardo was the right kind of guy for her and that he would treat her well.

Over the next few months, Ricardo won over Poole and other church members. Because the church was meeting in a school, they had to set up chairs and equipment every week and then clean up afterward. Ricardo quickly became a regular volunteer. And he kept showing up every week to help out, even after the church moved into a building of its own.

By March 2011, Ricardo and Heren were ready to settle down and get married. Poole officiated at the wedding and church members baked the cake and took photos. Heren’s friend Richelle Tramel put together a memory book for the wedding, which included this line: “I will love you faithfully, through the best and the worst, through the difficult and the easy.”

Despite their joy over the wedding, Heren says that one worry remained in the back of her mind. Ricardo was in the country illegally. He had come to the United States about a year earlier in order to work with his brother. She said that he told her about his status when they met, but that didn’t stand in the way of their relationship. Love doesn’t ask if you have a green card.

“It’s the kind of thing you overlook when you fall in love,” she says.

The couple was particularly worried about a local crackdown on undocumented immigration. Ricardo, who hung drywall for a living, worked in nearby Davidson County, whose sheriff was an advocate for the federal 287(g) program. At the time that Ricardo and Heren got married, that program meant that even a minor run-in with the law—like speeding or fishing without a license—could lead to deportation for someone like Ricardo.

“If you got caught, they just took you away and you’d have to leave your family behind,” Heren says.

Heren and Ricardo decided to try and get him legal status. Poole and other church members offered to help.

It’s not an easy process, says Linda Rose, a Nashville-based immigration attorney. Ricardo first had to go to the immigration office in Nashville, where he got a form stating that he was leaving the country voluntarily. He was told he had to go before March 18, 2012, which was just shy of their first anniversary. Once he left the country, Ricardo could apply for a visa to rejoin Heren, who is a U.S. citizen. That’s when things got complicated.

Crossing the border illegally leads to an automatic ten-year-ban. The only way around the ban is a hardship waiver, which Ricardo applied for last year. There’s no guarantee that the waiver will be granted. It can involve years of waiting.

“The irony is that the way the law is drafted, people who leave the country to do things the right way are punished,” says Rose. “I don’t advocate breaking the law, but it’s easier to stay in the country without documents.”

At first Heren hoped Ricardo would be home by Christmas 2012. But on December 27, she received a letter from the U.S. Citizenship and Immigration office in El Paso, Texas, saying they had received his application for a waiver—which included letters of support from church members and Poole—and needed more time to review the documents. That review could take a year.

“Please refrain from contacting us to inquire about the status of your application until the processing time of twelve months has elapsed,” the letter read.

After nine months and more than $7,000 in legal bills, Ricardo’s case was in limbo and he was stuck in Piedras Negras, a border town just south of Eagle River, Texas. His only contact with Heren was a daily phone call.

“I felt bad being away from my family,” Ricardo told The Tennessean newspaper in Nashville. “To be in the situation that I didn’t want to be in, to be waiting in that situation the whole period of time is a long time. I wouldn’t want to do it again.”

In order to get a waiver, Heren and Ricardo had to prove that his absence has caused extreme hardship. With Ricardo gone, Heren worked two jobs to make ends meet while caring for Ozman and her ailing father. Her faith and the support of church friends helped her keep going.

On most Sundays, the smiling faces of Heren and Ricardo would flash on the screen just before the start of services at MJ Life. Below the photo, taken on their wedding day, was a simple, three-word prayer: “Bring Ricardo home.”

Church members helped in other practical ways. They wrote letters in support of Ricardo’s application for a waiver and, once it became clear that his case could be delayed for months and perhaps years, began writing letters to Tennessee Republican Senator Bob Corker. One member of the church’s youth group even made an in-person appeal to the senator.

This past March, Ian Mansfield, then a high-school junior, traveled to Washington, D.C., with a school group. The trip included a meeting with Senator Corker. Mansfield took a letter from Heren with him and hand delivered it to the senator. Then he asked Corker for help in getting Ricardo home.

“It was a God thing,” he says. “As soon as I handed him that letter, I knew God would take care of it.”

For their pastor, Ricardo and Heren’s ordeal was an eye-opening experience. Poole says that before meeting Ricardo, he didn’t understand why immigrants would come to the U.S. illegally. He felt that they should either get legal status or leave.

“I didn’t understand why many would just sneak into our country,” he says. “Now I understand that the process is so messed up that the people who want to do the right thing are penalized. This has definitely put a face on this issue for me.”

Immigration reform has gained some traction among evangelicals. An alliance of denominational leaders, megachurch pastors, and heads of social service charities has started an initiative called the Evangelical Immigration Table. The group is advocating for immigration reform, including a path to citizenship.

Matthew Soerens, a training specialist who works on immigration issues for World Relief, says it often takes a personal connection for churches to get involved in immigration reform. When people hear the story of someone like Ricardo, they want to help. “All we are asking is to create a process for people who want to do the right thing,” Soerens says.

For many of the more than 11 million undocumented immigrants in the United States, getting legal status is difficult if not impossible. But for Ricardo and Heren, the prayers and persistence and some good fortune paid off. For most of the spring, Senator Corker’s office would call Heren with regular updates on Ricardo’s status. Then in late June, word came that his waiver had been approved.

After some last-minute red tape, Ricardo crossed the border on July 2 at about 5:30 p.m. and headed for home. Because they didn’t know when he’d be able to cross—Ricardo was stopped once at the border and had to go back to pay one last $165 fee and get one last bit of paperwork—Heren wasn’t able to get a plane ticket for him. Instead, he took a van from the border to San Antonio and then a bus to Nashville. Ricardo arrived home around midnight, just in time for the Fourth of July.

Bob Smietana is the religion editor for The Tennessean.