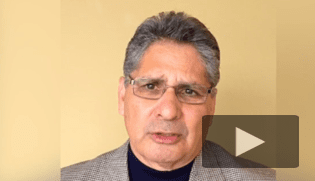 Covenant Leaders Tell Their Stories of Being Profiled

In his interview with the Companion, Alex Gee describes his experience of being racially profiled in his own church parking lot. So we asked several Covenant pastors and administrators if they had ever been racially profiled. Here are some of their stories, which have been adapted from video responses.

Efrem Smith, CEO of World Impact, is former superintendent of the Pacific Southwest Conference and former pastor of Sanctuary Covenant Church in Minneapolis.

When I was pastoring in Minneapolis, at least once a month my wife, Dinesha, and I and our daughters tried to have a gathering dinner with other families in our church to get to know each other better. On one particular Sunday evening we were having a meal with two other African American families who attended the church. We had sodas and stuff, but because we had little kids there we thought we should have some juice for them. So the two other men and I—all of us were African American—decided to drive to the grocery store to get some juice.

I was driving the speed limit, maybe even a little under the speed limit, to be honest. The next thing I knew, I saw flashing lights behind my car and we were pulled over. I was told to give my driver’s license, but what was interesting was that the other two African American men in the car were asked to show their IDs as well. That seemed weird to me.

The African American male in the front passenger seat and I were told to put our hands on the dashboard. As I looked in the passenger side mirror, I noticed that there was another officer on the other side of the car with his hand on his gun.

We were held for about twenty or twenty-five minutes. And then basically the officer who took our IDs came back and said, “You can go now.”

I said, “Was there a problem?” And he answered, “Well, it was reported to us that somebody broke into a house not too far from here, and we thought maybe you might have known something about that.” And I said, “No. I don’t.”

He walked away. He didn’t say he was sorry, didn’t apologize for the inconvenience or anything like that.

I wish I could say that was my only experience of racial profiling, but it’s just the first one I could think of.

When someone asks how often I think about the speed limit when I’m driving, I say, “All the time.” As a matter of fact, whenever I go somewhere with my family, my wife and I talk about who’s going to drive and who’s going to be looking out for the police while we’re driving. Not because we’re planning on driving ninety miles an hour or running a red light. But we’re used to being followed. We’re aware that we could be pulled over at any time.

I don’t want to make it seem like it’s a white cop, black civilian issue. I’ve been racially profiled by black police officers. Unfortunately it’s something we need to keep having reconciling, loving, healthy conversations around so that specifically African Americans don’t feel like they have to take extra precautions even when we are living life legally.

Mary Ann Owens is a lifelong Covenanter. She is married to Robert Owens, superintendent of the Southeast Conference.

A young lady walked into the store who was blonde-haired and blue-eyed. So we watched what he did with her. Not only did he not follow her—but in addition to that, he would lay the product on the counter for her and walk away to follow us. We decided at that point that we would never shop at that store again.

Ed Delgado is president of CHET, the Covenant’s Hispanic Center for Theological Education.

My wife and I were coming back from Canada to the United States at the airport, and I was stopped. I got pulled into an office. And all of a sudden my wallet was out of my pocket, everything was out of my pocket, and my documents were gone. I was by myself with an officer. The officer was taking his time. He opened my wallet, and he started pulling even the lint out of my wallet.

He soon let me go. I was able to get on my plane and go back into the United States.

Robert Owens is superintendent of the Southeast Conference.

“But what did I do?” I asked. I thought maybe it was a traffic violation. He said again, “Get out of the car.”

I said, “Why are you doing this, Officer? I mean, give me some reason. I’m a citizen here — what’s going on?” He never would explain to me.

Meanwhile, the other officer was standing at the back of the car, and he did have his hand on his gun. As I was trying to figure out what this was all about, they took my license, ran my license, and then they came back.

To watch all of our videos on racial profiling from the personal experience of these and other Covenanters, click here

He said to me, “Well, I don’t like your attitude.” And I said, “You don’t like my attitude? You stopped me for no apparent reason. Could you tell me why you stopped me?” He said, “Well, we heard on the radio that a robbery had taken place in this community, and you fit the description.”