An Unlikely Journey to an Unexpected Place 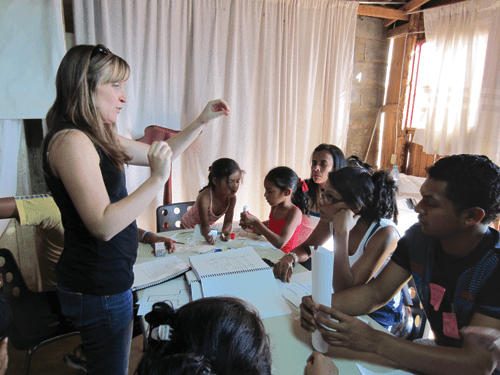 How two young people – one from suburban Minnesota, the other from rural Colombia – left their comfort zones and together followed God’s call.

Katie Isaza and her husband, Julio, are project missionaries in Medillín, Colombia.

As a young person, I lived a pretty comfortable life in the suburbs of Minneapolis, nurtured by my church family at Roseville Covenant Church. Although I had no thought of ever becoming a missionary, I participated in several weeklong mission trips with my youth group—one to Chicago and one to Reynosa, Mexico, when I was fifteen. It was the first time I ever saw the reality of poverty and injustice in the world. Jesus’s words in Matthew 25 took on a whole new meaning for me: “The King will reply, ‘Truly I tell you, whatever you did for one of the least of these brothers and sisters of mine, you did for me’” (v. 40, NIV). And while I didn’t know the impact that first trip to Reynosa would have on my life, looking back I now know that God used it to bring me where I am today.

Julio grew up on his parents’ farm in the countryside of Colombia. He and his three brothers helped with the daily chores such as milking cows, and they enjoyed swimming in the river near their home. During every school vacation Julio helped his father grow corn, cassava, watermelons, and rice.

Although he never expected to leave the farm, increased armed conflict in the rural areas of Colombia forced his family to leave when Julio was thirteen. They moved to a small town where the conflict was less intense, and Julio was able to finish high school.

Julio’s family was Catholic, but they rarely went to church. Being Catholic in his context was more cultural than an identification with a particular faith. When he was in high school, friends on his soccer team began to invite him to a church. He vividly remembers one night walking to the front of the church on a rainy evening and asking the pastor to pray with him. For the first time Christ and the good news of the gospel became real to him. It was a scary step of faith—what would his friends and family think? His father in particular was disgusted. But Julio could not deny that God was calling him. And not long after, he was able to lead his mother to Christ.

When I finished high school I decided to study for a year at Covenant Bible College (CBC) in Canada. Reading about missionaries like Amy Carmichael, I was in awe of their dedication and sacrifice. I found myself asking, “What motivated them to serve others in such a sacrificial way? Did they always feel ‘called’ to a foreign country?” another country?” The answer to that one was always “no.”

I also never saw myself living in an urban setting. It just seemed too scary for a girl who grew up in the suburbs. But there was that nagging sense that if I didn’t take a step of faith, I would always wonder what would have happened if I had. So I made the crazy decision to study at North Park University in Chicago.

Now I realize that that nagging sense was the Holy Spirit and that God was drawing me to the city so that I could interact with people of different cultures. Communicating with the children at the orphanage on my first mission trip to Mexico had developed a love for the Spanish language in me. So I decided to study Spanish and sociology at North Park, where I also served as a volunteer with World Relief.

One evening as I was serving at a shelter for women and children, I sat down to talk with one of the mothers. When she asked what I did, I told her I was studying sociology. She told me that she too had studied sociology and had worked as a social worker. Of course she never thought she’d end up homeless.

The conversation rattled me. I felt inadequate and ill-equipped to make a difference.

Yet God was teaching me that it wasn’t my competence that was needed, but a willingness to be used by God. Henri Nouwen expresses this idea beautifully in his book ¡Gracias!: “The more I think about the meaning of living and acting in the name of Christ, the more I realize that what I have to offer to others is not my intelligence, skill, power, influence, or connections, but my own human brokenness through which the love of God can manifest itself.”

Meanwhile in Colombia, Julio finished high school and left his small town for the city of Bogotá in hopes of finding work. This was also a frightening move. It wasn’t easy to find work, and Julio had no knowledge of the ins and outs of living in an urban setting.

Shortly after moving, he met Covenant shortterm missionaries Roger and Karen Gilbert, who invited him to worship at the local Covenant church. Roger became a mentor and friend, and he introduced Julio to other Covenant missionaries. Julio was welcomed into the church and invited to use his gifts.

Yet when missionaries Gary and Mary Lou Sander invited him to be a part of a new church plant and to serve in children’s ministry, Julio was uncertain. What would his friends and family say? He was in the city to work and make money, not to serve in ministry.

Two key moments in Bogotá stand out for Julio. One was seeing a brochure for North Park Theological Seminary in the Sanders’ home. He began to talk to Gary about what it would be like to study there someday. The reality was that it was very unlikely for a variety of reasons, one being that Julio spoke no English. Another barrier was that the thought of going to another country was downright intimidating. But Julio couldn’t let the dream go.

The other moment was discovering the Missionary Prayer Calendar. When he saw the calendar on the table at the Sanders’ house, he asked what it was. They explained that in the Covenant people prayed each day for different missionaries around the world. The concept of “missionary” was a new one for Julio. But he found himself thinking, One day I would like to be a missionary and be in this calendar.

He began to pray. Over time he began to feel a nudge to attend seminary. The Colombian Covenant Church, along with the missionaries there, encouraged him to study at the Biblical Seminary of Colombia in Medellín.

The first semester was challenging and Julio struggled to fit in. He found the academic environment intimidating, especially as most of his classmates already had higher education. There were times when he became overwhelmed and he was tempted to drop out. Yet through the support of his professors and friends, he persevered.

In 2002 Julio was invited to go to Norway with a Colombian team for nine months as part of an exchange program with the Norwegian Covenant Church. He had never been outside of Colombia before.

It was challenging, to say the least. He experienced moments of utter loneliness. As well, he struggled with the tension of living in a wealthy country while at the same time knowing that his friends and family were laboring to provide for their needs on a daily basis. Yet despite those difficulties, Julio experienced God’s presence in real ways while he was there. And it was in Norway that he began to dream about a soccer ministry that he later implemented in some of the most marginalized neighborhoods in Colombia.

While I was in college I spent a semester abroad in Spain. It was a difficult and lonely experience, and afterward I thought, “Okay, I’ve done that. Now I know that living abroad is not for me.” But after I graduated in 2000, I was invited to serve as the dean of women for Covenant Bible College–Ecuador. I didn’t want to leave the States again, nor did I want to deal with the loneliness of being in another new place. But I couldn’t deny the Spirit’s prompting, and I accepted the job. When I arrived in Ecuador, I had an overwhelming sense of coming home. What an unexpected and yet welcomed experience it was for me. Even in the midst of the challenges of living in another country, it was evident that this was where God was calling me to serve. I served in Ecuador and other Latin American countries for the next three years.

During that time I participated in a Covenant youth conference in Cartagena, Colombia. At one of the evening services a group of Norwegians were sitting in the row behind me and someone was translating for them. At one point I felt a tap on my shoulder, and the translator asked me to repeat something that the speaker had said. When I turned around and saw that the translator was Colombian, I was intrigued. How did this man from Colombia know Norwegian? After the service we started up a conversation and I learned that Julio had recently returned from Norway. A friendship was formed as we shared stories about culture shock, the difficulty of leaving family, the challenges of trying to fit into a new culture, and our desire to serve in God’s mission. When I returned to Ecuador, our friendship became a long-distance dating relationship. In October of 2003, Julio asked my parents for their blessing to marry me and a new journey began for both of us.

We were married in Colombia and continued to serve the Covenant Church there in the areas of youth ministry and social outreach projects. Amazingly enough, the dream that God had planted in Julio’s heart many years earlier came true. In 2006 we were able to move to the United States where Julio enrolled at North Park Theological Seminary. We lived in Chicago for five years during which our family grew with the amazing gift of two sons.

We were tempted to stay put and live comfortably in the familiar (for me at least). Yet we knew that our time in the States was temporary. If there is one thing we’ve learned on this journey it is that it’s not about our plans for the future, but about surrendering our lives to God and accepting the invitation to participate in God’s mission.

So as we prayed, we made the decision to return to Colombia to serve together as Covenant missionaries in the areas of church planting and leadership development. It definitely isn’t easy—sometimes we have been tempted to call it quits. Still, as we look at the work of God in our lives, we cannot deny that this is where God has brought us. Surrender is a daily action. Throughout our journey we have become more aware of the call that Jesus has on all of our lives to follow him wherever we are living.

Have you ever asked the question, “How did I get here?” As Julio and I look back at our story, it seems remarkable how God brought two people from completely different backgrounds together in marriage and ministry. The journey has been a process of living into a mutual call to love God and love others. At times it has been uncomfortable, scary to step away from what is familiar. But it is amazing where God will take you when you surrender your right to control your life and when you desire to live into the call to love God and love others.