Finding Livelihood Beyond a ‘Deep Gladness’: An Interview with Nancy Nordenson 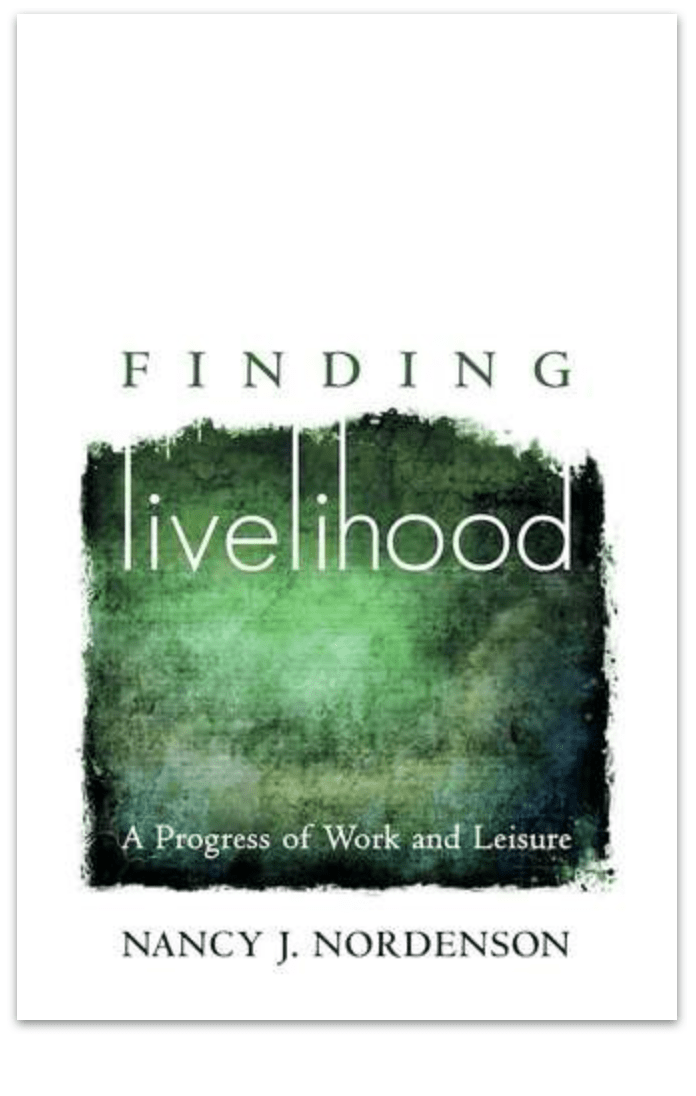 Finding Livelihood Beyond a ‘Deep Gladness’:

An Interview with Nancy Nordenson

Nancy Nordenson, a member of Bethlehem Covenant Church in Minneapolis, is a freelance medical writer by day whose writing has appeared in Harvard Divinity Bulletin, Comment, and other journals. By night (or early morning), she is a creative writer and essayist, which she considers a “spiritual vocation that I practice.” She has received notable mentions in The Best American Essays 2012 and The Best Spiritual Writing 2012. An excerpt from her just-released book, Finding Livelihood: A Progress of Work and Vocation (Kalos Press, 2015), appears in the May/June Covenant Companion.

Covenant Newswire interviewed Nancy about her book and her critique of Frederick Buechner’s oft-quoted words that “the place God calls you to is the place where your deep gladness and the world’s deep hunger meet.”

What led you to write this book?

In 2007, I wrote “A Place at the Table,” an essay that ended up being part of the book. I wrote it with the intention of working through a difficult time. My husband had lost his job the year before, just months after I started graduate school, and we had two sons in college and many years left on the house mortgage.

We had already endured a string of turbulent work years and thought we had arrived at a place of stability. I had wanted to cut back significantly on my job as a freelance medical writer while in graduate school, but this job loss changed everything. I started writing that essay to make peace with this ongoing, hard situation.

At the same time, though, I had long been thinking of writing something about a worktable that was in my home office but previously had been used in the basement kitchen of my church. The table kept tugging at my imagination, and that led me to think about the women who had worked around the table, and the communion bread I and others used to make for our small congregation.

So as I was writing about my husband’s job loss, thoughts about the table and the women and the communion bread started circling in and seemed to have something to offer this place of turmoil. After finishing the piece, I knew there was more for me to try to figure out regarding work, so the essay became the trigger for more writing and for pulling in some earlier writing I had done on work as well. The process took years not only because of my other full-time work but also because the issues at stake took a long time to think through, work through, and find ways to write about.

Your day job is as a freelance medical writer, producing articles, slide decks, and case studies. But you note in the introduction that you wanted to write Finding Livelihood in a lyric style. Why did you make that choice?

By its very approach, a lyric style points to the fact that a topic is complex and multi-dimensional and can’t be satisfactorily addressed with a classic linear structure such as I use in medical writing. It combines experience, research, reflection, images, stories, and questions and braids it all together, with the occasional imaginative leap. It is a way to look at this topic that is challenging, intellectually as well as personally, from lots of angles rather than only straight on. A lyric style lends itself to exploration rather than teaching, so the end result is a kind of meditation rather than a textbook or compendium on the topic.

The need to keep our eyes open to the movement of God in our work is a thread that runs throughout. Can you say a little about that?

In Finding Livelihood, I’m considering the workplace as a necessary venue for spiritual journey—particularly when that workplace doesn’t meet your definition of “satisfactory.” Too often we think about our spiritual journey as only involving other parts of our lives, or we judge the value of our work only by what it produces or how we contribute to the world through that work. In the book, I suggest that work is a place of spiritual transformation and growth, and that if you’re a working person, the pathway of spiritual growth goes straight through your job.

You have great respect for Frederick Buechner, but you disagree with him on what has become virtually an adage among preachers and spiritual writers that “the place God calls you to is the place where your deep gladness and the world’s deep hunger meet.”

This line of his, which is really a reiteration of something Aristotle said, has become the go-to plumb line for work and vocation. Even people I know who seem miserable in their jobs recite it as if it’s straight from the mouth of God. It’s not. Buechner goes on to say that if you’re bored at your job, you’re probably not in the right place because obviously it’s not fulfilling your deep gladness, and that if you’re doing TV deodorant commercials, you’re also probably not in the right place because that’s certainly not the world’s deepest hunger.

This seems to me to be snobby and unbiblical. It assumes to know the mind of God and it assigns a great many people to being outside of God’s favor. It also creates unrealistic and unwise expectations that lead us to believe we’re doing something wrong if we don’t find and stay in that intersection of our great passion and the world’s need.

Would the person who cleans the restrooms at the downtown bus station be allowed to participate in that definition? Or the one who sells high-end shoes in a suburban mall? As you noted, I do have great respect for Buechner and his work; I love so much of his writing. Sometimes I wonder if he really believed this himself when he said it. Now it’s taken on a life of its own—that’s my speculation of course.

If you read his memoir Now and Then, which tells the story primarily of his vocational development, you don’t see him going through a calculation of that sort for his own life. Rather, you see him taking next steps—and not always in a sense of deep gladness—as life unfolded for him.

How would you differentiate between vocation, call, career, and job? Did your view of these terms change as you wrote the book?

I intentionally decided while writing the book that I wouldn’t take a stand on defining these terms. In fact, in one essay, I have some fun with their ambiguity. There are many definitions for vocation and call being bandied about, and all of them are dependent on some grand theory of work that not everyone agrees with.

My focus in the book is not on grand theories or on helping the reader decide what their vocation is or whether God called them to their current job or career. My focus is on being human in the workplace.

Instead of trying to make my case for a definition of vocation and call, I wanted to skip right to the place of work, wherever that may be, that place where the transaction of labor and compensation is made. I wanted to spend my energy exploring the challenges of the modern workplace and the need to develop an openness to meaning despite the challenges, exploring the role of Sabbath-like leisure—time, space, rest, contemplation, and prayer—in a life of work, and exploring how sacramental living is the milieu in which work can be part of a spiritual journey that encompasses all of life.[/vc_column_text][/vc_column][/vc_row]