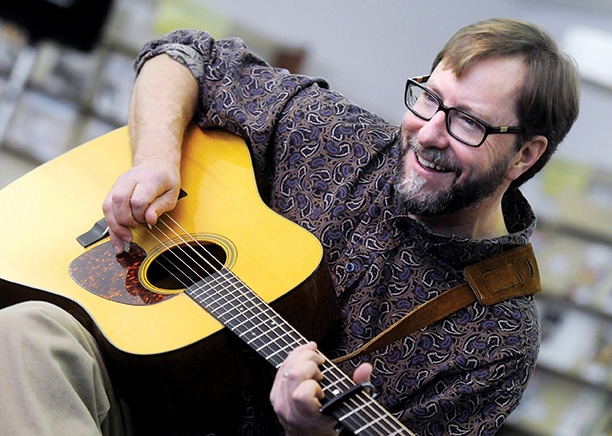 [/vc_column_text][/vc_column][/vc_row][vc_row][vc_column][vc_column_text]After a Catholic school upbringing and an evangelical season in high school, Charles Pettee headed off to college thinking that too much of the faith he had seen lacked concern for the well-being of the world. “I wanted to find some sense of reverence for nature in the New Testament. I did not see it, and there was no one to help me, so I faded out,” he says. “The Christian religion as I knew it was entirely ‘other worldly’ at best, and at worst, possibly in collusion with the powers that are consuming the world via greed, war, and pollution.”

As a “proud agnostic,” he went on to start a family and play bluegrass—until he turned forty-one. That year he offered to play “Amazing Grace” for a close friend’s funeral. He was struck by the combination of mourning and rejoicing in the community at the church he and his family now attend. “They exuded peace and a sense of gratitude,” he says. “It was unreal to me. I realized that I was poor indeed—that I had really nothing to offer my young son that would enable him—or me—to deal with the larger issues of life and death. That sounds cerebral, but it wasn’t. I was empty in my gut.”

Pettee called the church and asked if they had a “credible Bible” to read, believing that the pocket New Testament his wife had in college couldn’t possibly be a faithful rendition. “I was shocked to find that it said pretty much what the paperback New Testament had. I couldn’t square the Jesus I was meeting in those pages with the ‘Jesus’ I had come to believe was cheering on the powers that were, to my eyes, destroying the world.”

In 2000 he prayed that he would come to know the Jesus he encountered in Luke’s Gospel. “I had to learn some things in life before I could come back to the Bible. Maybe one has to have lived forty years to really understand what’s in there.”

Pettee recalls the day the Psalms started to connect for him. Patiently enduring a monotone Sunday reading of Psalm 127, “Unless the Lord builds the house,” he realized with a jolt, “That’s a real song!” Up to that time, he says, “the Psalms gave me the heebie-jeebies, kind of like the person you think is an arrogant jerk on first meeting. Only later, when you become friends, do you realize you were reacting to their most interesting qualities. You find the strong visceral reaction turns out to be love.” He knew that unfiltered honesty about life experience and the range of emotion it evokes makes for good songwriting, particularly the bluegrass that Pettee knew so well.

As a founding member of North Carolina’s the Shady Grove Band, he’d written a few songs about his re-discovered faith, but he and the band weren’t entirely keen on them. But, being a bluegrass musician, he respected tradition. So when he discovered a songbook in the Old Testament, he realized he didn’t need to rely solely on his own spiritual experience anymore. “I was looking at foundational texts—and they were crying out for music!” he says.

Pettee found a melody for Psalm 136, “an easy one, with call and response,” then another for Psalm 67, and more after that. A word had come to him before any note or chord, a hint that the music would embrace more than bluegrass: “FolkPsalm.” He recruited friends to play local venues and Americana gatherings like Merlefest under that name. A first recording became a celebration of God’s Steady Love. “It was me saying to the world, ‘Wow! Listen to what I’ve heard in these ancient songs.’ I wasn’t thinking of doing them in church at all.”

The response was encouraging: one listener said, “Nice work. Nine psalms down and 141 to go.” Pettee answered that he had no such plans. It was a one-off and the project was finished.[/vc_column_text][/vc_column][/vc_row][vc_row][vc_column width=”1/1″][vc_column_text]

“The Psalms gave me the heebie-jeebies, kind of like the person you think is an arrogant jerk on first meeting. Only later, when you become friends, do you realize you were reacting to their most interesting qualities. You find the strong visceral reaction turns out to be love.”

[/vc_column_text][/vc_column][/vc_row][vc_row][vc_column width=”1/1″][vc_column_text]But music kept coming as he continued his daily reading of the Psalter and journaling his discoveries. A second recording, True Wealth, highlighted the social justice dimensions of Psalms like 49 and 146. Churches started inviting FolkPsalm to perform. So did Ellen Davis, professor of Bible and practical theology at Duke Divinity School, who asked Pettee to come to her class and present the songs in between her expositions. She gave him a list of works in biblical scholarship to inform his writing and regularly reviews his paraphrases. Davis also wrote a booklet to accompany a third recording, The Way of Manna, an exploration of agrarian themes incorporating texts from Genesis and the prophets.

FolkPsalm’s latest recording, A Dove on Distant Oaks: Psalms for the Journey, “is a collection about the journey of faith—how it takes unexpected turns, and how the Psalms offer language and support for anything that can happen,” says Pettee. “More than anything else, it’s an effort to explore the surprising and sometimes puzzling juxtapositions of mood and topic in the Psalms.”

For example, “Psalm 95: You’ll Never Know,” starts with praise and ends with the ancestors who tested God in the wilderness: “You’ll never enter into my resting place.” Pettee says, “I tried to bring out the contrast by dropping out most of the instrumentation when it comes to God’s speech. Frankly, I’d like even more contrast, but I hope there’s enough to alert the listener that maybe this prayer is going in a different direction than where we thought it would go.” These complex changes between thanking and suddenly pleading “make the Psalms, in my opinion, superior as art to almost anything we have in semi-modern gospel music or contemporary Christian. For these latter styles, the theology and subject matter are kept extremely simple. It can’t be both praise and tearful lament in today’s pop music, religious or not. It can only be one thing. The Psalms are almost never just ‘one thing.’”

That’s why, as much as Pettee appreciates the form-based categories scholars use to designate one psalm as a petition and another as praise, he also recognizes the limits of those categories. Likewise, movements of orientation, disorientation, and re-orientation noted by Walter Brueggemann and others are helpful, “but the psalms will shift around their ‘orientation’ depending on the reading or the reader’s situation. They aren’t static!”

As much as possible, Pettee tries to include the whole psalm to follow its sense of real-life experience. When asked how he decides which psalms go with which melody, he is quick to reply: “Bottom line, the psalms choose me!” As tunes come, they usually give some indication where they want to go, though not always immediately. “Psalm 85: Glory Will Dwell in Our Land” uses an instrumental tune that Pettee wrote twenty years ago; in his words, the psalm “stepped up and grabbed that melody.” And, some psalms require more than one. The minor inflection of “Psalm 148: All of Creation Sings Praise” on Dove sounds the way it was written in 2005, but a lilting waltz-time melody went with the same lyrics on Way of Manna in 2010. “Sometimes melody and the psalm come together at once. Overall, setting these to music is an adventure in grace, a process of actually releasing control. It goes poorly when I try to ‘direct’ things,” Pettee says.

Live performances allow Pettee and FolkPsalm to present a richer, deeper version of Christian faith, even while not all members claim that faith for themselves. When all can make a performance, they have eight players, but Pettee sometimes ask members to join him for duos, trios, or quartets. That requires some adjustment of harmonies and instrumentation, so the songs keep evolving that way also. “I work with an incredibly talented bunch of people, who can harmonize with each, switch parts, etc., as needed. I am spoiled rotten by these people! I pray that our treatments of the Psalms will come alive for audiences, that they will hear them in a fresh way, relate to them better, and maybe even be tempted to incorporate them into their own prayer life.”