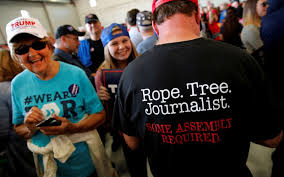 You may choose to question the veracity of this column because I am “disgusting” and “among the most dishonest human beings on earth.” At least that’s how President Donald Trump refers to me and my fellow journalists.

People are often surprised when I tell them that I have been both a newspaper reporter and a pastor. Most seem to think the two professions are incompatible. But I always explain that both share similarities at their core—both are about telling truth, lifting up the dignity of people in telling their stories, and overcoming darkness with light.

When I was in grade school I knew I wanted to be a newspaper reporter. I learned to read, in part, by keeping up with the local sports coverage in the St. Louis Post-Dispatch and Globe-Democrat. As I grew older and attended journalism school at the University of Missouri, I viewed being a reporter and editor as a way of making society better—by holding government accountable for its actions and sharing what is good in people. I would not have used the word at the time, but journalism has always been a calling.

That’s why it was so hard to make the transition when I first began to sense a call to pastoral ministry. It was almost as if I were betraying a first love. Now as a reporter and editor for the Covenant Church, I get to combine my experience in the pastorate as well as in newspapers, and for that I am deeply grateful.

As a Christian and a journalist, I found it chilling to read President Trump’s tweets last Friday in which he described the mainstream media as the “enemy of the American People.”

He already had declared the media “the opposition party” and called coverage he disagrees with “FAKE news.” While standing in front of a wall honoring dead CIA agents at CIA headquarters, he declared, “I have a running war with the media.” At a rally in Grand Rapids, Michigan, last year, he told the crowd, “I hate some of these people, I hate ’em.”

His words Friday worsen an already dangerous atmosphere. As Senator John McCain said, delegitimizing the press is what autocrats do.

Reporters covering Trump have been reduced to reporting from holding pens at the back of the room. During the campaign, some were subjected to more than 10,000 people yelling, “CNN sucks,” egged on by then-candidate Trump.

In Minneapolis, a man wore a t-shirt with words that read: “Rope. Tree. Journalist. Some Assembly Required.” Apparently it was meant to be funny. The shirt sold well online until it was pulled after the photo went viral.

At the University of Missouri School of Journalism a plaque is displayed with the Journalist’s Creed, written by the institution’s first dean, Walter Williams, in 1914. It concludes with these words:

I believe that the journalism which succeeds best—and best deserves success—fears God and honors [humans]; is stoutly independent, unmoved by pride of opinion or greed of power, constructive, tolerant but never careless, self-controlled, patient, always respectful of its readers but always unafraid, is quickly indignant at injustice; is unswayed by the appeal of privilege or the clamor of the mob; seeks to give every [person] a chance and, as far as law and honest wage and recognition of human brotherhood can make it so, an equal chance; is profoundly patriotic while sincerely promoting international good will and cementing world-comradeship; is a journalism of humanity, of and for today’s world.

It is a call to which nearly every journalist I have ever known aspires. Most journalists would tell you that their work is indeed a calling. It’s true that many of us often fall short of the ideal—just as it’s true that every Christian falls short of living up to ideal that Jesus sets for us.

When journalists do fail, we should be held accountable. But the journalists I went to school with—some of whom are part of the mainstream press that the president maligns—take seriously their call and responsibility. Every president from the founding of our country has had issues with the press. Indeed, on occasion the Obama administration froze out Fox News just as the Trump administration is doing with CNN. But even then, as Fox anchors Shepard Smith and Chris Wallace have said, Obama never denounced the media as “the enemy.”

Sarah Pulliam Bailey, a Wheaton College graduate who is the religion writer for the Washington Post and a former online editor for Christianity Today, wrote last December that, “The act of doing journalism is a way to live out my faith, a way to search for and then reveal truth in the world around me.” In that article, she admonished fellow evangelicals to stop viewing the mainstream press as evil and purveyors of fake news.

The framers of the Constitution recognized that without the press, democracy could not exist. The role of the press always has been somewhat adversarial—how else can journalists report accurately in the face of gatekeepers who are determined to either hide information or manipulate its dissemination? Pursuing truth can get messy. But that does not make the press the enemy.

What Christians should support is the pursuit of truth, especially in this “post-truth” age of “alternative facts.” We are, after all, people for whom truth matters. We are people who believe that the truth will set you free.  But when Christians are OK with calling me and my fellow journalists “the enemy of the American people,” not only is our democracy threatened, but even worse, so is our witness. 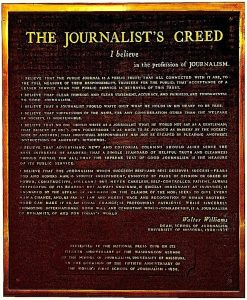 I believe in the profession of journalism.

I believe that the public journal is a public trust; that all connected with it are, to the full measure of their responsibility, trustees for the public; that acceptance of a lesser service than the public service is betrayal of this trust.

I believe that clear thinking and clear statement, accuracy and fairness are fundamental to good journalism.

I believe that a journalist should write only what he holds in his heart to be true.

I believe that suppression of the news, for any consideration other than the welfare of society, is indefensible.

I believe that no one should write as a journalist what he would not say as a gentleman; that bribery by one’s own pocketbook is as much to be avoided as bribery by the pocketbook of another; that individual responsibility may not be escaped by pleading another’s instructions or another’s dividends.

I believe that advertising, news and editorial columns should alike serve the best interests of readers; that a single standard of helpful truth and cleanness should prevail for all; that the supreme test of good journalism is the measure of its public service.

I believe that the journalism which succeeds best — and best deserves success — fears God and honors Man; is stoutly independent, unmoved by pride of opinion or greed of power, constructive, tolerant but never careless, self-controlled, patient, always respectful of its readers but always unafraid, is quickly indignant at injustice; is unswayed by the appeal of privilege or the clamor of the mob; seeks to give every man a chance and, as far as law and honest wage and recognition of human brotherhood can make it so, an equal chance; is profoundly patriotic while sincerely promoting international good will and cementing world-comradeship; is a journalism of humanity, of and for today’s world.