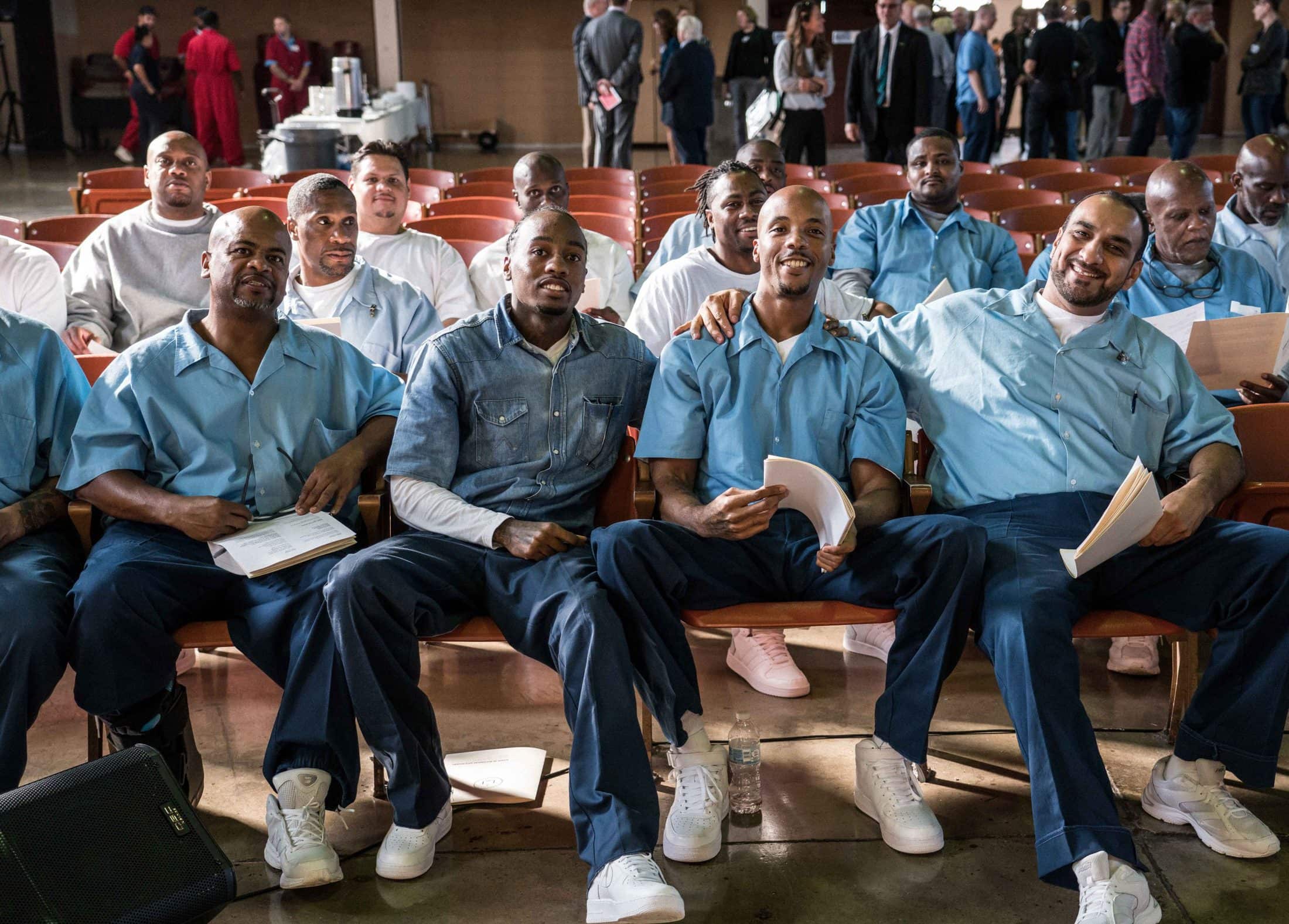 “You don’t hear this much from guys who are locked up, but I’m so glad to be here today.”

That’s how Michael Simmons began his remarks to celebrate the opening of the new School of Restorative Arts last week at Stateville Correctional Center, a maximum-security prison outside of Chicago.

The school is operated by North Park Theological Seminary and offers a Master of Arts in Christian ministry with a restorative arts focus, which includes courses on ministries of restoration through personal healing and community relationships. The degree extends NPTS’s traditional MA degree to include courses to prepare those who desire to do ministry in contexts susceptible to violence. Many of the students participated in pilot courses over the past three years and now have the opportunity to earn a degree. (“Letters from Stateville” featured students enrolled in one of those pilot courses.)

Simmons is a member of the first cohort of 40 students.

New North Park President Mary Surridge attended the first day of class with the students in August. At the ceremony last week, she said to them, “I’ve been in this role for one month and here’s what I know already: the best part of the job as president is being with the students.”

The idea for the school was birthed in a sabbatical project of Michelle Clifton-Soderstrom, professor of theology and ethics at the seminary. She also is the director for the new school.

Her research on the impact of education programs in prison indicated that higher-education programs such as the School of Restorative Arts significantly reduce recidivism and save the state an average of $5 for every $1 invested.

“Education in prison improves relations between students and staff and between racial groups. Students also become powerful role models for their children,” she said. “Most important, education helps people build meaningful lives on the inside and upon release. This program has the potential to positively impact the culture in prisons across Illinois at a grassroots level.” The program primarily serves those with long-term sentences who may be able to transfer to other prisons around the state upon completion of the program.

In addition to classic theological disciplines, students take courses in trauma and healing, racial reconciliation, religions and cultures, conflict transformation, and transformative justice. The restorative arts focus moves students from basic ministry knowledge to comprehension, analysis, and application of ministries of restoration. They focus not only on their own individual learning but on growing and deepening relationships with other students in the cohort, which is composed of both free and incarcerated persons.

Students will develop skills that are useful both inside and outside prison, from facilitating Bible studies, creative communication, and walking with people who are grieving or dying to analyzing factors that lead to incarceration, including prison pipelines.

Also in attendance at the event were dignitaries and state officials, including Lieutenant Governor Evelyn Sanguinetti and John Baldwin, director of the Illinois Department of Corrections, who told the gathering, “It’s a pretty rare event when an elected official comes to this institution. It’s a sign of how seriously we take this program.”

Burl Cain, former warden of Angola prison and founder of Global Prison Seminaries Foundation, encouraged the students to be servant leaders even in the midst of their studies. Cain has been a pioneer in offering theological education to people who are incarcerated. He partnered with New Orleans Baptist Theological Seminary more than 20 years ago to launch a Bible College. Speaking at the celebration, he emphasized the power of rehabilitation when it emerges from the example and leadership of students themselves.

“I’ve been inside prison for seventeen years and in Stateville for three,” Simmons told the gathering, “but I am learning in class that there’s strength in being vulnerable.”

That’s a common theme among the students. One added, “Inside, it can be dangerous to show weakness, but we are learning that vulnerability can be empowering.”

Steven Feagin talked about the significant impact the courses are making on him. “I came here from Florida,” he said. “I grew up with 17 brothers and sisters—all from the same mother and father, which is different from a lot of people here. I came up here to go to Northwestern on a football scholarship. I haven’t been in the system before—this is my first incarceration.”

He went on to describe an assignment in the course “Women, the Bible, and the Church” in which students were asked to write an argumentative essay one week, then the next week, to argue for the other side on a topic of their choosing. “I couldn’t do it,” Feagin said. “I couldn’t write from another perspective. Everyone else handed in their second papers, but I couldn’t write mine.” His professors agreed to let him alter the assignment. But then Feagin thought about it further. “I realized I needed to at least try. And I was able to write that paper. I learned to open up to new perspectives.”

Such assignments help students to embody empathy toward others, humility before God, and appreciation of a variety of cultural perspectives—all of which are tools in the work of restoration, said Clifton-Soderstrom.

At the conclusion of the celebration, all the participants gathered for a reception with cake and pastries. “This is the first time we’ve ever been able to eat together,” Clifton-Soderstrom said. “It’s a really good day!”