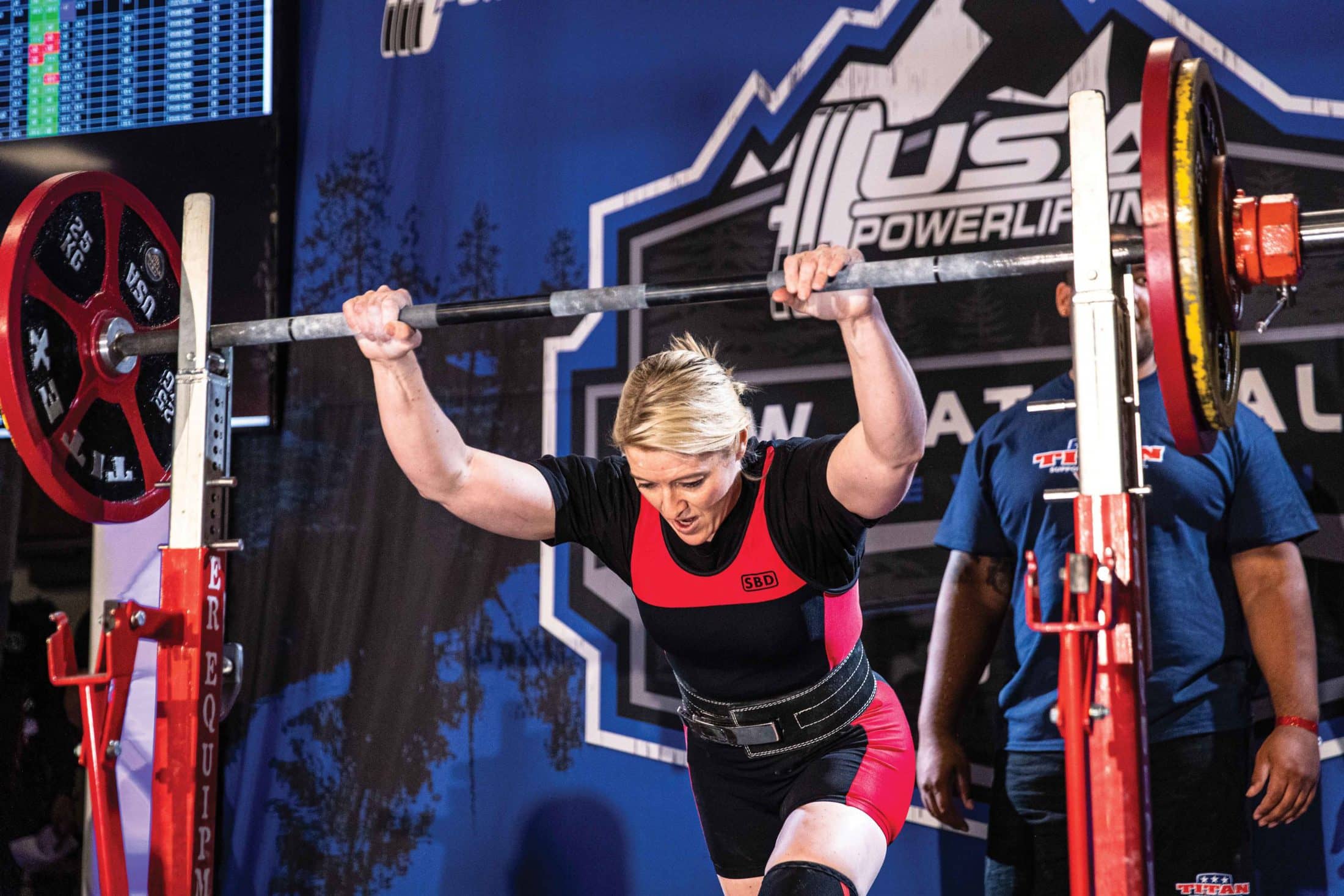 From circus school to national competitions, how one Covenanter discovered her inner strength—literally

Merideth Randles faced the 370-pound barbell on platform 3 for her third attempt with purposeful resolve. After her successful first attempt at 358, the judges ruled that she had “hitched” her second attempt by briefly resting the bar on her thigh before pulling up to a full stand. This one had to be a clean lift.

Randles, a member of Emmanuel Bible Church in Seattle and chair of the finance committee of the Covenant Executive Board, was competing in the deadlift event of the USA Powerlifting Raw Nationals, held in October in Lombard, Illinois. She knew that facing the weight after a failed attempt is as much a mental battle as a physical one.

An actuary by trade, Randles began lifting competitively just two years ago. The self-proclaimed middle-aged professional can now deadlift the equivalent of a refrigerator and has surprised herself with her achievements. “I was the math nerd in high school and lettered in band,” she says, laughing.

Her road to powerlifting began when her daughter Evelyn was in middle school and saw an ad for trapeze classes at an acrobat and circus school in a community coupon book and thought it might be fun to sign up. In her first class, Evelyn learned about safety equipment, listened to instructions, climbed the 25-foot ladder, stood on the platform, and jumped. It was a lot to take in and she was hesitant to go back.

When we stress our bodies and then recover properly
with rest and nutrition, God designed us
to grow physically stronger.
I see a beautiful spiritual parallel here.

“I didn’t want nerves to keep her from doing something she enjoyed,” says Randles. So she offered to take the class with Evelyn. It wasn’t her first foray into such thrill-seeking adventures. Randles had previously tried skydiving, scuba diving, and had once repelled from the 40-story business tower where she works in downtown Seattle for a Special Olympics fundraiser.

The class turned out to be fun for both of them. “We had a great time and just kept going,” says Randles. “I figured, if she’ll keep doing this with me, I’m going to keep doing it as long as she wants.”

Together they learned basic maneuvers and tricks—how to swing, bring their knees up on the bar, catch off a knee hang. A year later, when her younger daughter, Carolyn, turned 10, she joined them. All three participated in student shows together until Evelyn left for college. “Seeing both of them develop the confidence to climb that high platform and perform has been inspiring,” Randles says.

When Randles told her coaches she wanted to improve her trapeze skills, one advised her to focus on developing her physical strength. So she began strength training, regularly making her way to the gym. As her lifts progressed, she realized her weight numbers put her within range of competitive lifting. When she discovered some Washington state records for her category were within reach, she started working toward breaking those records.

She now holds the state record for deadlift and for the three-lift total (squat, bench, deadlift). The squat record will take some time to beat, but she is chasing that one as well.

The October 2019 competition was the second consecutive year that Randles qualified for the powerlifting nationals. For that third and final deadlift she harnessed her mindset into focus, positive thinking, and thankfulness to generate confidence and succeeded in her attempt of 370 pounds. That meant she placed fifth overall in her age and weight class of women 40-49 years old weighing 63 kilograms (138.8 pounds) or below. Her meet total, a combination of the deadlift, bench press, and squats, was 783 pounds, which broke her previous personal record of 777 pounds. She also set a new personal record in squats—265 pounds. “This has been the year of the squat,” she says. “My trainer and I dubbed it squat mania!”

“It’s a model of how churches
can live in unity….
We have to learn to lead
from ‘among’ rather than ‘above.”

As her strength training progressed, Randles discovered that the work also equipped her to participate in Spartan races, which are highly competitive obstacle course races. They vary in length from three miles for the sprint level to 30 miles for the ultra and include challenging elements such as tire flips, gravel bucket carry, atlas stone carry, and monkey bars (her favorite) that require significant sustained strength. Randles has competed in races around the world—in Hawaii, France, and Sparta, Greece—weaving the travel into business trips. The most challenging was the Ultra World Championship in the snowy mountains of Hveragerdi, Iceland, in December 2018. The 24-hour race included more than 100 obstacles and covered 30 miles. She finished in 22.5 hours, and since it was December, 20 of those hours were in the dark.

Randles has loved the whole journey, “Every step forward, the daily training, the way it cultivates courage, the communities they offer me,” she says. “When I feel my training gain traction, it gives me a broader sense of what is possible.”

And, she adds, she is learning new ways to appreciate who God created her to be. “I’ve had a long career in a white-collar job, and I really hadn’t thought too much about how God designed me physically until these experiences.”

Now she says, “When we stress our bodies and then recover properly with rest and nutrition, God designed us to grow physically stronger. I see a beautiful
spiritual parallel here. We continually face challenges and the effects of sin in life. If we truly rely on God for recovery, we grow in spiritual strength as we receive the fruit of the Spirit. Everyone can find things they are passionate about, that they want to be invested in, and feel challenged by. Powerlifting happens to be the outlet in which God is able to speak to me.”