Like other Covenant churches and communities of faith concerned about homelessness, Lakebay (Washington) Church recently banded together to help make a difference. One Sunday in August, people from the church helped to produce a “tiny house” styled micro-dwelling, which will create shelter during the winter months for someone in need. Rather than simply writing a check or sending a few volunteers, the entire congregation showed up and literally helped put it together.

Lakebay partnered with a regional organization called Low Income Housing Institute, which hosts tiny home villages serving unhoused populations across the Seattle/Tacoma metro area. The tiny home they built will eventually be transported to one such village. 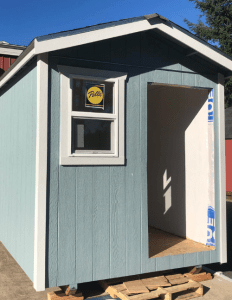 Dan Whitmarsh, who has served as Lakebay’s pastor since 2006, says the idea started after the church voted to sell a portion of their property to a nonprofit serving teenagers in crisis. The project will become a group home for unhoused teens in the local school district.

“We had a nice windfall of money come in, which helped sustain us during the pandemic,” said Whitmarsh, “but there was agreement in the group that whatever we made from the sale, we wanted to tithe and invest in the community.”

One woman on the church council heard about the tiny home villages, and the idea began to take root. The church took time during the spring to investigate the process and assess its viability—and learned that it was surprisingly straightforward.

“They provide the plans,” explains Whitmarsh. “There’s a binder with a step-by-step process, and you can either buy all the materials yourself, or you can cut them a check and they’ll deliver it all to your site.”

Lakebay Church signed a contract in May and selected a date in August. From there, it was a simple matter to consecrate the communal act of building the home as part of the rhythm of Sunday worship, since the church already had a tradition of holding summer services outside.

“One fun piece,” Whitmarsh says, “was that visitors from another Covenant church showed up that morning to our church building. They read the note we left on the door and drove over [to the location of the construction site], and joined us there. They weren’t dressed for labor, but it was an encouragement to have them there.”

During a break in the work, the assembly of believers rounded up chairs for a brief outdoor service. There was a devotional from Psalm 133, a short rendition of the doxology, and then prayer and the sharing of the Eucharist. One member prayed a prayer of blessing over the building, took a group photo, and they got back to work.

They were going to lay hands on the building as part of the prayer, but it’d just been freshly painted that morning, so they opted to skip that part.

“It was a beautiful day, there was a good spirit in the place, and it reflected the Lakebay Church at its best,” Whitmarsh says. “It was the perfect moment for God’s people to be together, to worship God with hammers and saws in our hands, and to have a tangible awareness that come this fall, someone will be living in this home. One of our folks told me afterward that while I was sharing, two bald eagles were circling overhead, and one landed on a tree behind me, keeping an eye on things.”

Whitmarsh considers it part of his calling to spearhead opportunities for his community of faith to bear public witness to God’s redemptive power.

“I’m just convinced that there’s an opportunity here for the church to shine the light of Christ in some broken and hurting places.”