Where None of Us Reflects Our Creator Nearly as Well as All of Us.

Our journeys started at opposite ends of the continent.

Tracy was born in rural East Texas during the heart of the Civil Rights movement. A child of proud Black educators, Tracy experienced and persevered through discrimination from her earliest years. Moving from a rural setting in the South to urban Minneapolis in the Upper Midwest as a young child did not mean leaving discrimination behind. The North was no racial nirvana, and the reality of discrimination was even more pronounced.

Peter was born in rural, arctic Alaska just a year after Tracy. His birthplace was far removed from the social reckoning sweeping through most of the United States at the time. Peter, whose parents were white educators, had a different experience of being a minority among the many cultural communities of Indigenous Alaskans. On the “last frontier,” focused on survival, the diverse communities of Alaska relied on one another and interacted with shared purpose and mutual respect.

We didn’t set out to make our life about racial redemption, but our origin story made it kind of inevitable.

As God ordained our paths, we walked onto campus at Biola University in southern California on the same day in the mid-1980s. We met after two white students and their parents refused to share a dorm room with Tracy. Openly agitated at the idea of their daughters rooming with “a black,” they waited until Tracy left and then moved all of her belongings onto an empty bed down the hall. What motivated them was evil, but God redeemed it for good because the empty bed was next to a friend of Peter’s who promptly introduced Tracy and Peter.

Five years later, our path led us down an aisle and into the adventure of marriage that has shaped us for 33 years. We formed our biracial family and then expanded it as six kids arrived—via both the hospital and the airport.

After two birth kids, we adopted our three oldest children—siblings from Ethiopia—and grew our young household from four to seven overnight. Two years later, we had one more child, who completed our family of eight. We celebrate a community of Black and white, American and Ethiopian under one roof. We didn’t set out to make our life about racial redemption, but our origin story made it kind of inevitable.

In his work as a high school teacher and administrator in Minnesota and Colorado, Peter experienced campaigns at various schools and districts to “Celebrate Diversity,” alongside expectations to be colorblind and impartial. Yet, despite such overt claims of harmony, he witnessed hostility and insecurity in all types of relationships.

In the early 1990s, a group of white students at a suburban high school where Peter was teaching attacked and beat a Black female student for being “disrespectful.” At the same time, Peter worked with teaching and coaching colleagues who made team selections or academic recommendations based more on negative racial stereotypes than individual ability. Educators who professed to be “colorblind” routinely discouraged students of color from more advanced or challenging classes and activities. 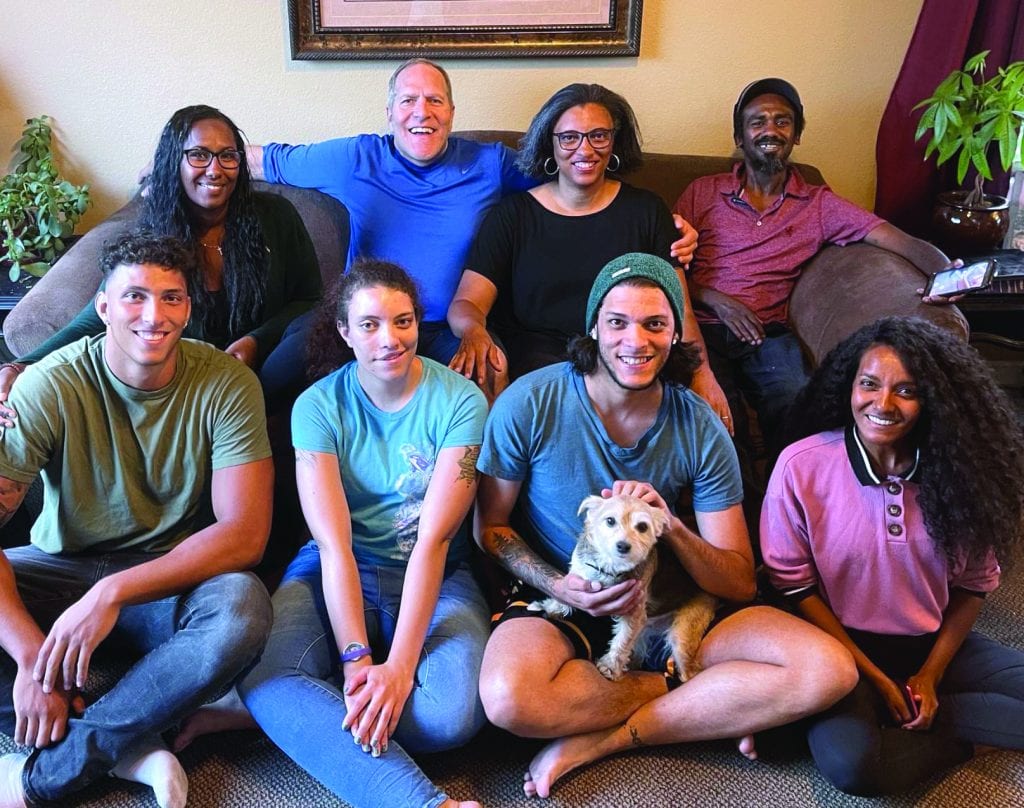 In her roles as a hospice chaplain and later as pastor, Tracy has counseled and sojourned with people from multiethnic communities and multiple faith traditions. While most were welcoming of Tracy’s gifts and ministry, some were not. On one occasion, a hospice client greeted Tracy at the door, saying that she was the first “colored” person in their home. At another patient visit, a neighbor blocked Tracy’s car with his truck and demanded to know what she was doing in his neighborhood where it appeared, “you don’t really belong.”

As a family, our children were treated differently—ignored or trusted, befriended or bullied—based on the color of their skin and their apparent identity. From racial epithets painted on our fence to being singled out for suspicion, to being beaten for being in the wrong park after dark, members of our family took turns living in the valley of the shadow of sin.

While we struggled with the reality of sin and brokenness along racial fault lines, we also found healing around our own dinner table in conversations about these real-life wounds. We tried to build a biblical response through a devotional practice we called “Family Church” where each of us prepared and led discussions about stories and passages that addressed our life.

We expanded our healing journey through partnership with faithful believers who were willing to bear the burden of the consequences of racial sin and injustice with us. We had the meaningful experience of sharing a weekend where a primarily white congregation and a primarily Black congregation came together for a seminar called “An Invitation to Racial Righteousness,” an initiative of Love Mercy Do Justice. We experienced what came to be known as I2RR as a way for whole churches to journey together toward racial reconciliation.

At the time, Tracy was serving on the executive board of the Covenant Midwest Conference and had the opportunity to participate in Sankofa, a personalized version of I2RR, where two people of different ethnicities journey together through geographic and spiritual destinations that tangibly capture some of the legacy of brokenness and healing in the United States. Years later, we had an opportunity to train with Covenant leaders from across North America in the expanding expression of I2RR.

Experiences of trauma within our family and devastation across the country compelled us to speak up and take action at an ever-deepening level. With a burden for congregational and personal redemption, we developed RedeeminG Race, a ministry where we share our story and invite others onto the pathway of healing.

We know that Christ’s kingdom, expressed through the local church, holds the only answer for redeeming the brokenness that has diverted us away from God’s plan for diversity as a blessing. Our purpose is to provide opportunities for churches to take responsibility and exercise community leadership that reflects God’s design for sanctifying diversity.

There is no Redeeming Race without grace at the center. Our conviction is that race-based sin and division represents the complete absence of grace and that healing requires massive infusions of grace-based interactions.

As a hospice chaplain, Tracy witnessed many people arrive at the table of reconciliation without the foundation of biblical study. That led us to choose Psalm 23 —the most familiar passage of all—as the core of our redemptive dialogue. Through prayer, we found a framework within the Shepherd’s psalm that spoke to our heartfelt need:

Both believers and churches have gotten race wrong for millennia. But Jesus invites us onto a righteous path of peace and protection in the power of his name. Christ the Redeemer covers us in his identity and anoints us for reconciliation at a table of redemption. The Lord’s Table is also our fellowship of communion—a common unity in the shared sacrifice of body and blood. When saints of all races “do this in remembrance” of his sacrifice, we are unified in submission and gratitude before our Savior.

In contrast, the powers and principalities of the world tell us to “look out for ourselves” and “cast down the oppressors” as a response to past sin. The prescription they offer is self-exaltation and universal accusation. We can hear it after every high-profile racial incident—accusation from one side, denial from the other, and a chorus of defensiveness all around.

But God is building something better. In God’s kingdom, racial sin is a source of sorrow but not irredeemable shame. Racial repentance leads to healing, not another cycle of harm. In the house of the Father, we will gather the full spectrum of race and ethnic traditions, where none of us reflects our Creator nearly as well as all of us.

In our seminars, we journey through a “grace space” where churchgoers can gather over a weekend in honest dialogue about the wounds of racial division. We use a mix of large-group presentations, small-group discussions, and individual, overnight reflection to cultivate new convictions and motivation to identify and take the next right step toward redeeming race.

We are guided by the presence of a shepherding Savior who sanctifies us daily. Our responsibility is to partner in the work he is doing as Redeemer. As believers on that path, we cry out with the psalmist, “Search me, O God, and know my heart; test me, and know my thoughts. See if there is any wicked way in me, and lead me in the way everlasting” (139:23-24). We value corporate confession and restoration, and we believe that begins with a personal admission of sin and shortcoming.

We believe sharing our personal stories of trauma, sin, healing, and hope is the only way out of our present darkness. Political leadership and social activism can be powerful forces for justice, but only the church that lifts up Jesus Christ can draw all of us into merciful fellowship. In Christ we pray for forgiveness, and we pray for the grace to forgive those who sin against us. Since racial division has been a mechanism of so much evil, reclaiming and redeeming our racial identity through Christ is a powerful witness to God’s redemptive plan.

Like the personal conversations of Sankofa and the congregational invitation to racial righteousness, we invite individuals, families, and communities to be vulnerable about racial division, misunderstanding, and even sin. Our enemy, the deepest racist of all time, wants us to stay separated, stay proud, and stay in judgment. But by the Spirit, we can come together in humility and mercy to redeem the Creator’s original design.

In our own home, and across our dinner table, we see why God called us—from Alaska and Texas, from education and church ministry—into a fellowship of grace. The problems of racial sin are profound, but God’s grace is more than sufficient.

Our journeys started at opposite ends of the continent, but our paths came together, and we’ve been writing a story of “grace expectations” ever since.