The Beautiful Chaos of Change, Ministry, and Hip-Hop

Missional storyteller Jelani Greenidge met Covenant global personnel Tammi and Jochy “IronHeart” Hernández at the Unite West conference last summer. They followed up with a virtual sit-down to discuss Jochy’s hip-hop ministry in the Dominican Republic and how they balance artistry, mission work, and family life together. Their conversation has been edited for length and clarity.

Can you begin by telling us how you became involved with the Covenant?

Exactly. So that was Tuesday of Thanksgiving week, and the deal was just for that weekend, so we would have to go on Friday. And she’s like, “Yeah, I just thought it would be fun to dream.”

That same day, the head of our pastoral relations called me and said, “We had a meeting last night, and we were talking about you,” which isn’t something you necessarily wanna hear.

Right? Yeah, that could go either way.

He continued, “We were talking about how you hadn’t had a vacation in a long time. So you need to tell me by Friday where you’re going, and I’ll buy your ticket”.

Yeah. So we headed down here, and we spent that week reconnecting with people we had met over the years.

God used that week to say, “This isn’t about just taking an occasional trip for you. This is your call.” So I emailed the Covenant and said, “This was my experience. I don’t know what any of this means.”

I started out officially working with Merge Ministries as a trip facilitator—now they’re called coaches. Then I started doing consulting for churches in the United States and Canada on healthy mission practices, especially with churches doing missions in Haiti.

When Jochy and I met over eight years ago, we started looking at how we were going to meld our ministries together. We both had a heart for being bridge-builders. We wanted to plant a church for those who don’t feel welcome in a traditional church. 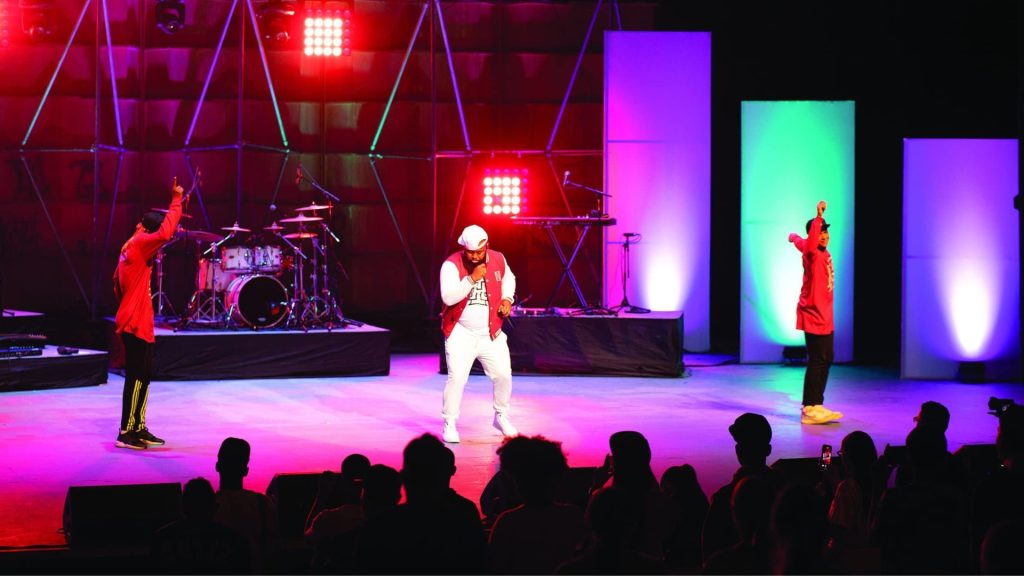 So, Jochy, how did you enter the picture?

Jochy: I used to be a professional dancer. I used to breakdance, krump, and a bunch of other regular hip-hop. I was part of the entertainment team [at a resort], doing choreography on the main stage every night. When I became a Christian, I started asking God how I could use my talent in the church. Because for me, I’m not a bench Christian. You have to use me or lose me. I will not just be sitting around and watching. I brought that question to my pastor, and he told me to use my talent to reach out to kids. So I did that for a long time.

How old were you at this point?

About 17 or 18. At that time I was doing hip-hop classes every Saturday afternoon, so I started opening each class with a brief devotional, and then we would go at it, full speed. All the kids from the neighborhood were so excited that a bunch of them started attending church. We started a youth service, and it went from around 15 regular kids to about 60 fast.

Then one day around 2012, after performing in a Christian concert, I went back to my house and felt this weird sensation. The next day my mom took me to the doctor, and he did all these tests. We found out it was a pre-heart attack. The doctor said, “You have two months to have heart surgery, or it’s gonna be too late to fix it.”

I come from a poor, low-income family, single mom, two siblings, and I’m adopted. And then I lost my job, which meant I lost my insurance. The surgery was about $89,000, or about three million Dominican pesos. You can buy a house with that.

I was visiting heart and lung specialists; I saw like five of them in one day. And then we went to a clinic and found out about a special program where doctors from Texas come and perform surgeries at low cost. They happened to be coming during the time when I needed my surgery. So we went to the appointment, and they interviewed me and explained what would have to happen if I were to get the surgery, all the things I would have to commit to. There were 15 candidates for only ten surgeries, and I was the last one on the list to be interviewed. But when the guy returned, he told me that I would be the first to have surgery.

Afterward, they told me, “You can’t do breakdancing anymore.” I went back to my pastor, because I was wondering how I was going to be useful to God. My pastor basically told me, “If God let you go through that process, he’s gonna give you something else to do.”

That’s how I started getting into music performance, rapping and improvising and all that. When the doctor told me not to dance, I was thinking, No, this is part of who I am. I have to dance. So I had to find a way to keep doing it without putting myself at risk.

Even if it wasn’t exactly like it was before.

The confirmation came when we were doing an outreach, and a couple guys and I were doing beat-boxing in the corner, making beats and stuff, and I was freestyling with biblical phrases and rhymes. We were two blocks away from where I used to live, and all these kids started gathering around. And then out comes the biggest drug dealer in the community. I was thinking, Oh man, I’m in trouble. But he didn’t stop me. After I finished, he called me over to talk. I’m a dead man right now, I thought. But he said, “I wanna hear more about that God.” He accepted Jesus that day. He stopped selling drugs and opened up colmados, or convenience stores, because he wanted to build up the community instead of tearing it down.

So that was my confirmation. 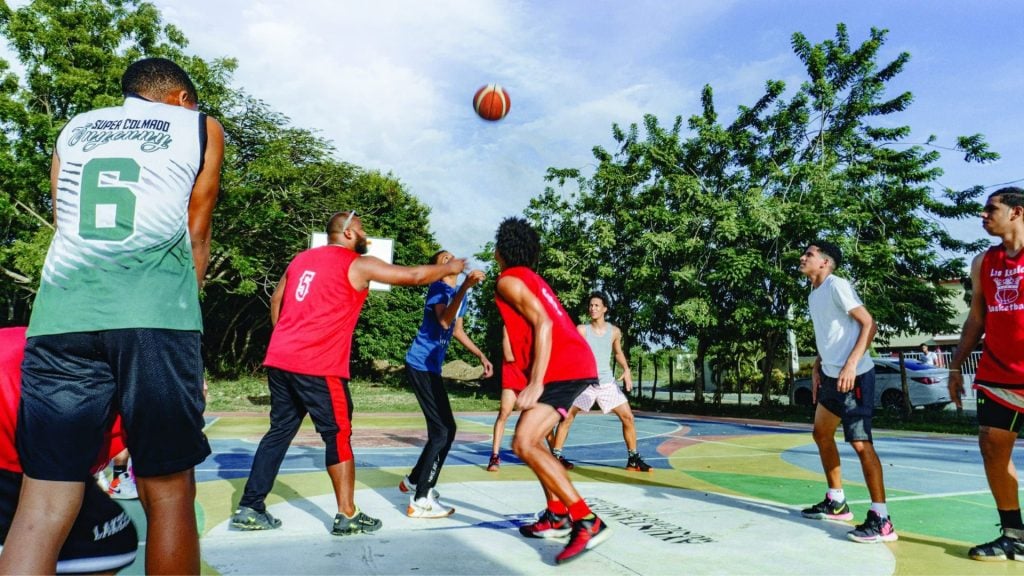 How did the name IronHeart come about?

Jochy: In trying to find the right name for my new stage of life, I was thinking about the fact that I actually have a new heart.

Jochy: I figured if I call myself IronHeart, it sounds cool, but also people will ask me what it means, and it’s an opportunity to share my testimony.

Jochy: I didn’t at first, but after diving into the ministry I realized there were more people in it than I thought. But it was still an underground movement and really persecuted by the church. There was a lot of pushback from the Christian community, people saying that hip-hop was evil or from Satan. They were like, “You can’t dress like that; you can’t talk like that.”

Even though there’s a lot of cultural differences between where I am in the US and the DR, that part is completely consistent. I grew up with the same kind of thinking.

Jochy: After a few years, I started trying to learn more about my capacity and what other talents I could use to reach people. I became what they call a tentmaker, a bivocational missionary. In the dance crew I used to have, instead of being the lead dancer, I become a mentor. That led to my becoming an actor. I starred as the protagonist in the first Christian dance movie in the Dominican Republic. That’s how I met Tammi—I was dancing in a hip-hop video.

Tammi: We had been in one of the same churches, but we didn’t know each other. A mutual friend asked me to come help during a video shoot. I didn’t know I was gonna end up being a backup dancer in the video!

Jochy was the choreographer, and we started taping the video. Then the electricity went out. My friend said, “Jochy, why don’t you tell us your story?” He mentioned just a little bit about the heart surgery, but then the lights came back on. So I Facebook stalked him and said, “It was great meeting you, and I’d love to hear the rest of your story sometime.” That was all it took.

Seventy-five percent of the congregation at Tal Como Soy are young men.

Jochy: We started talking about how our talents would meld together—her skills and my skills, her capacities and my capacities. We were both passionate about reaching people, about pastoring people who have no place in the traditional church.

How is your church different from what we traditionally think of church?

Tammi: Our church is called Tal Como Soy (Just as I Am) and we started the church to reach those who feel on the outside of the traditional church. There is a lot of legalism here so a vast majority of the community to which God called us felt like they don’t belong or are wanted. God has filled Tal Como Soy with young men! About 75% of our congregation are young men, 12-25 years old. We use a blend of hip-hop/rap along with more traditional praise and worship.

What has it been like for the two of you doing ministry together?

Tammi: There are so many different parts of the culture where fundamentalist Christians clash [with our ministry]. A few years ago there was a church that was okay with Jochy coming in and singing and rapping at church. He was wearing his T-shirt, hat, etc. I was pregnant with our son, so I was wearing leggings and a long shirt. I had a song with Jochy, but they wouldn’t let me onstage because I wasn’t wearing a skirt. In some places people may be accepting of rap music, but not of women in ministry, whereas in other places it might be the other way around.

Jochy: One of my friends always says that time is the best friend of Christians, because in time your testimony is gonna talk louder than any of your words. 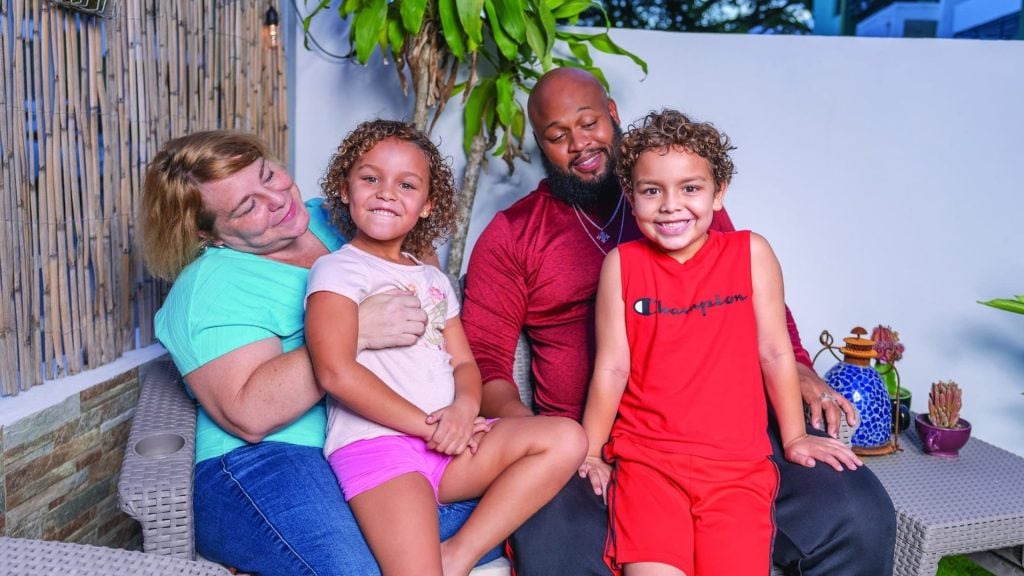 How do you balance all that with having a family?

Tammi: It’s multifaceted. We like to call it beautiful chaos. Our kids are four and six, and as global personnel, we have to make sure that the ministry is being supported, so that adds another layer. We’ve had to sit down and streamline, figure out how to make better boundaries for ourselves. We’re trying to be very intentional about having a Sabbath day.

Jochy: In the mix between being a pastor, being missionaries, and being a musician, it works if you have a really good team of leaders around you. We’re co-pastors, and we have another leader who is like a third co-pastor—someone with enough knowledge and ability to make good decisions and manage the church while we’re not there. We were out of the country for two weeks, and he took care of everything.

If you could go back in time to when you were first starting out, what’s one piece of advice you would give yourself?

Tammi: Establish boundaries from the beginning and guard our family time.

Jochy: For me, I need to remember that I won’t love anybody more than God already does. Early on, I made decisions based on love that risked the stability of my family. So I have to remind my young self, “Okay, you love the people and want them to know Jesus, but God loves them even more, so just step back and let God work.”