OMAHA, NE (June 27, 2019) – It was fitting that Ed and Lynda Delgado stood together as they received separate Irving C. Lambert Awards last Friday during the opening dinner of the 134th Annual Meeting of the Evangelical Covenant Church. The award honors the recipient’s commitment to urban ministry.

The couple, who first met in grade school, have supported each other’s work around the world. They have served in Haiti, the Dominican Republic, Mexico, Central America, South America, Africa, and Asia, as well as the United States. 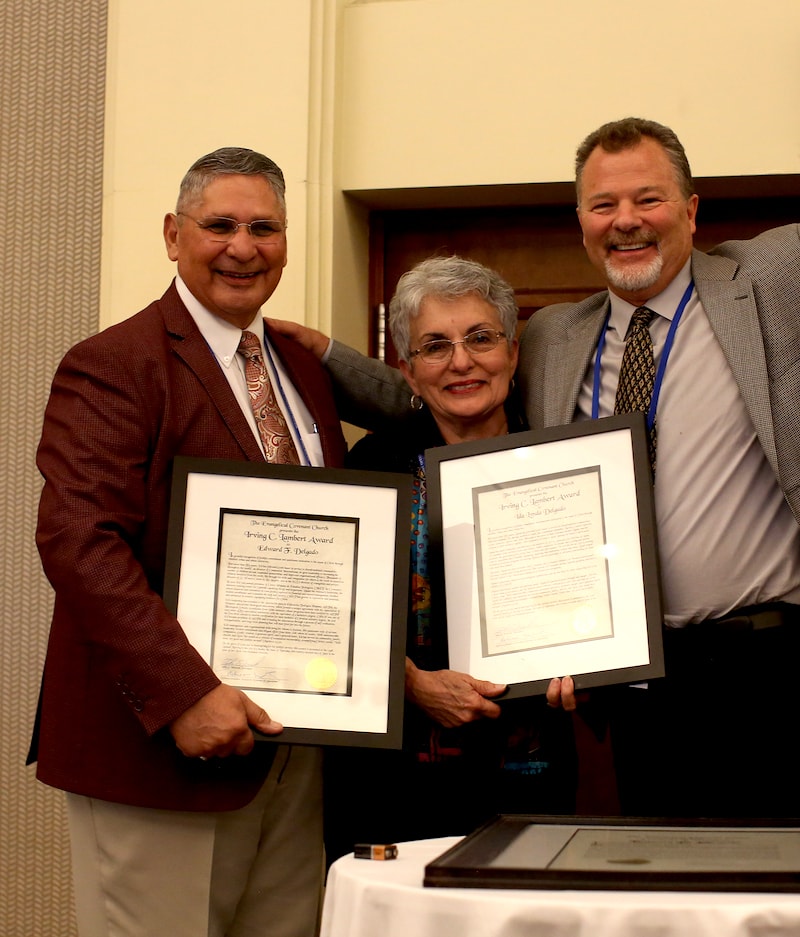 Ed is retiring this year as president of Centro Hispano de Estudios Teológicos (CHET), the Covenant theological school for Spanish-speaking pastors, church planters, and lay-people. He has nserved in that role since 2007. Prior to that, he directed the work of Compassion International in South America, Africa, Mexico, and the Caribbean. He also had served as CHET’s vice president, and director of evangelism for the denomination’s Department of Church Growth and Evangelism.

Under his guidance as president, CHET became one of the first three Hispanic biblical institutes to receive certification for its bachelor’s of Christian ministry degree under standards that were approved by the Association of Theological School (ATS) and the Educational Hispanic Theological Association (AETH). That has made earning a baccalaureate degree for pastoral ministry more affordable.

.The school also started 12 learning centers in six states in the United States, and had students in other countries, as well.

Ed said Lynda’s support has been essential to his own ministry success. “We’ve always been partners, and there’s no way I could have done this without her.”

She added she was grateful that he had always supported her work. Over the years, Lynda has been a leader in Women Ministries’ Advocacy for Victims of Abuse program from its inception; helped pilot the formation of Crescendo, the Covenant’s ministry for “boomers and beyond;” participated in North Park University’s VIVE program, which introduced the school to Hispanic students and families.

She learned of the nascent AVA program when she offered to volunteer helping stuff envelopes for Women Ministries, which started the program in 2003. She attended the first training for advocates. “It was so eye-opening,” Lynda recalled.

In 2018 she led an AVA training team in Argentina and Colombia, where they educated women and teens. There are tentative plans to offer the program in Cuba in September. Lynda also has helped develop a certificate program at CHET for training Hispanic leaders on advocacy and healing.

Through her work with VIVE, Lynda increased North Park’s engagement with Hispanic young people. “This was another time of connecting the next generation to know their resources, their gifts and opportunities in life and particularly in the ECC,” she said. “It is rewarding to see some of our youth that have moved forward and are now in professional careers because of VIVE.”

Now it is the Delgados who are looking to move forward, although it wasn’t easy to make the decision. Lynda said her work helping lead Crescendo, which encourages older adults to pursue purposeful living, helped them move on to the next stage.

“It made us realize we were apprehensive of it because of the unknowns,” Lynda said. “We were reminded that every major decision and move we took, we didn’t know what was ahead. We just trusted God. We ended up in different cultures and different countries.”

Lynda emphasized that they are looking to share what they have learned through the years. “We don’t look at it as if we’re going to finish ministry, but just continue it in a different way,” she said. “There’s still too much to do. At this stage of our lives, we have more experience to glean from and share so we can’t quit. We need to support and encourage and build up those who come behind us. We know it will be different, but we still have that fire in us.”